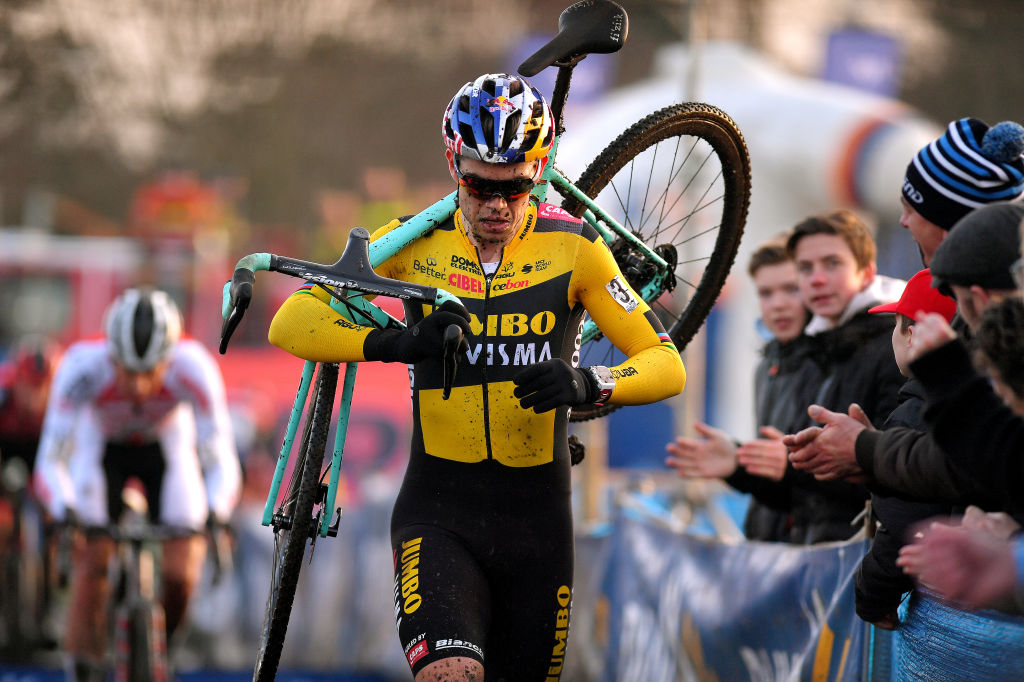 Wout van Aert (Jumbo-Visma) powered to his first victory of the 2020-2021 cyclo-cross season, powering away from a puncture-plagued world champion Mathieu van der Poel (Alpecin-Fenix) in a sloppy mud-fest in Herentals.

Van Aert overcame a last-lap crash to cruise to the win on his home course by 35 seconds over Van der Poel.

Michael Vanthourenhout (Pauwels Sauzen-Bingoal) was best of the rest in third as his teammate, European champion Eli Iserbyt, did enough to hold onto the time-based classification lead.

With a heavy, hilly and technical new course in Herentals ahead, Van der Poel and Van Aert shot away from the gun and quickly established themselves at the head of the field, with Vanthourenhout the only rider able to stay close in the opening lap. Van der Poel’s mountain bike racing experience showed as he handled the steep slippery descents and rutty straightaways with aplomb.

Van Aert, in contrast, went in for multiple bike changes in the first laps, trying to dial in the correct pressure and having to use precious energy to ride back to the Dutchman. By the end of the second lap, Van der Poel had a handful of seconds on Van Aert, with Vanthourenhout losing ground behind ahead of Pauwels Sauzen-Bingoal teammates Eli Iserbyt and Laurens Sweeck, and Toon Aerts (Telenet Baloise).

Van der Poel built his lead on the third lap but disaster struck after the halfway point when the world champion’s risk of running lower tyre pressures to help on the technical sections cost him – he punctured far from the pits and Van Aert was able to catch him and ride past, opening up a solid 30-second advantage by the end of lap four of six on his home course.

The battle for the time-based classification continued behind. Coming into the Herentals round, Iserbyt led by 1:20 over Lars van der Haar (Telenet Baloise) with Aerts down 2:33, and the European champion continued to fight to limit his losses, chasing with Aerts and Quinten Hermans (Tormans) as Van der Haar faded.

In the closing laps, Van Aert continued his strong ride to hold off Van der Poel, who simply could not close down the half-minute gap and with no dog in the general classification fight, he seemed to put it in cruise control and save energy for the bigger races ahead.

Pelted by a torrential downpour, Vanthourenhout powered into the final lap at 1:23, with Aerts leading Iserbyt at 2:10, with Hermans and Sweeck seven seconds behind.

By the finish, Van Aert had stretched his gap to 35 seconds on Van der Poel despite coming down in a steep downhill turn. Vanthourenhout was third at 1:32, with Aerts taking fourth over Iserbyt at 2:14 and 2:18, respectively.

Iserbyt extended his lead over Van der Haar in the series classification by 30 seconds.

‘It had a massive impact on my career.’ Why the Tour Down Under is so important for Australian pros – VeloNews.com

Mathew Hayman and his ‘fairytale ending’ Down Under – VeloNews.com