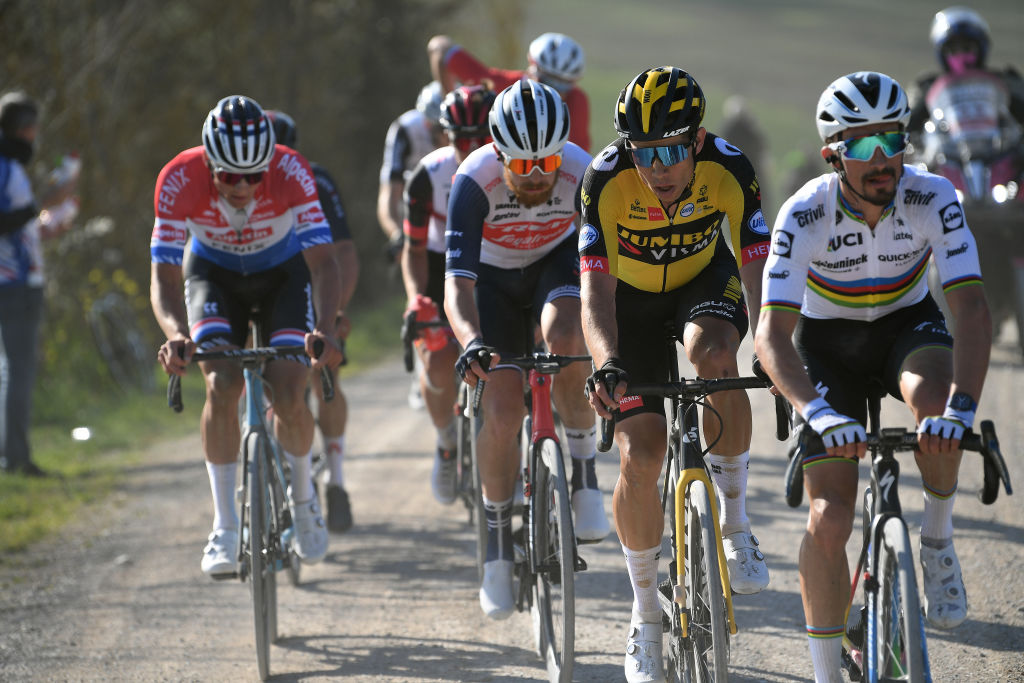 Wout van Aert (Jumbo-Visma) reputedly produced prodigious numbers during his recent training camp at Mount Teide but he acknowledged that he was still a percentage point or two short of his best after he placed fourth at the 2021 Strade Bianche.

The Belgian had never finished off the podium in his previous three outings at Strade Bianche, and he lined up on Saturday as the defending champion.

It was, however, his first road race of the 2021 season, and he could not match the fearsome acceleration of winner Mathieu van der Poel (Alpecin-Fenix) on the final gravel sector at Le Tolfe, where only Julian Alaphilippe (Deceuninck-QuickStep) and Egan Bernal (Ineos Grenadiers) could follow.

“In the end, it was the best riders in front, and there were a few guys who were stronger than me,” Van Aert said after coming home 51 seconds down on Van der Poel.

“I have to be content with fourth place. I felt in the final that the last percentage points weren’t there yet.”

Van Aert’s Jumbo-Visma team were active at the head of the peloton approaching the midpoint of the race but the Belgian maintained that the wind conditions were not conducive to forcing an early selection. With 50km to go, a sizeable gruppo was still together on the pivotal Monte Sante Marie sector of gravel.

“There was a lot of wind. In the first part of the race, it was a tailwind, but then there was a long section of headwind and it was easier to stay in the wheels compared to other years, so that was why a big group arrived together at the Monte Sante Marie sector,” Van Aert said.

“Normally there’s a big difference made before then, but not this year.”

Van Aert was part of an elite group of seven riders that went off the front after the Monte Sante Marie but he surprisingly betrayed signs of suffering on the short but sharp dirt road climb at Monteaperti with 24km remaining, where he and Tom Pidcock (Ineos Grenadiers) were distanced.

He managed to steady himself after that wobble and bridge back with Pidcock at the base of the Colle Pinzuto, but he already realised that he would struggle to emerge victorious from such an elite group.

When Van der Poel, Alaphilippe and Bernal forged clear on Le Tolfe with 13km remaining, Van Aert was left to chase with Pidcock, Tadej Pogacar (UAE Team Emirates) and the surprising Michael Gogl (Qhubeka-Assos), but they never looked like bridging the gap.

“I was maybe the first in the front group who was in difficulty, but I got going again afterwards and I did the final to the maximum of my capacities today,” Van Aert said. “The three riders in front were the strongest.”

On the steep final haul towards Via Santa Caterina – where he had fallen in exhaustion en route to third place in the remarkable and wet 2018 edition – Van Aert was able to draw away from Pidock, Pogačar and Gogl to take fourth place in Piazza del Campo.

With the Classics approaching, he could draw solace from how he finished out his effort.

“Yes, I’m progressing, that’s sure. It was a difficult race, but I was there in the important moments and I finished fourth so I’m happy,” said Van Aert, who praised his old rival Van der Poel’s overwhelming accelerations in the finale when speaking to Sporza.

“On that last sector, I already saw how impressive he was. The best always wins here.”

Van Aert will remain in Italy to ride Tirreno-Adriatico in preparation for Milan-San Remo on March 20. The Spring has only begun.

Ride the white roads of Siena with