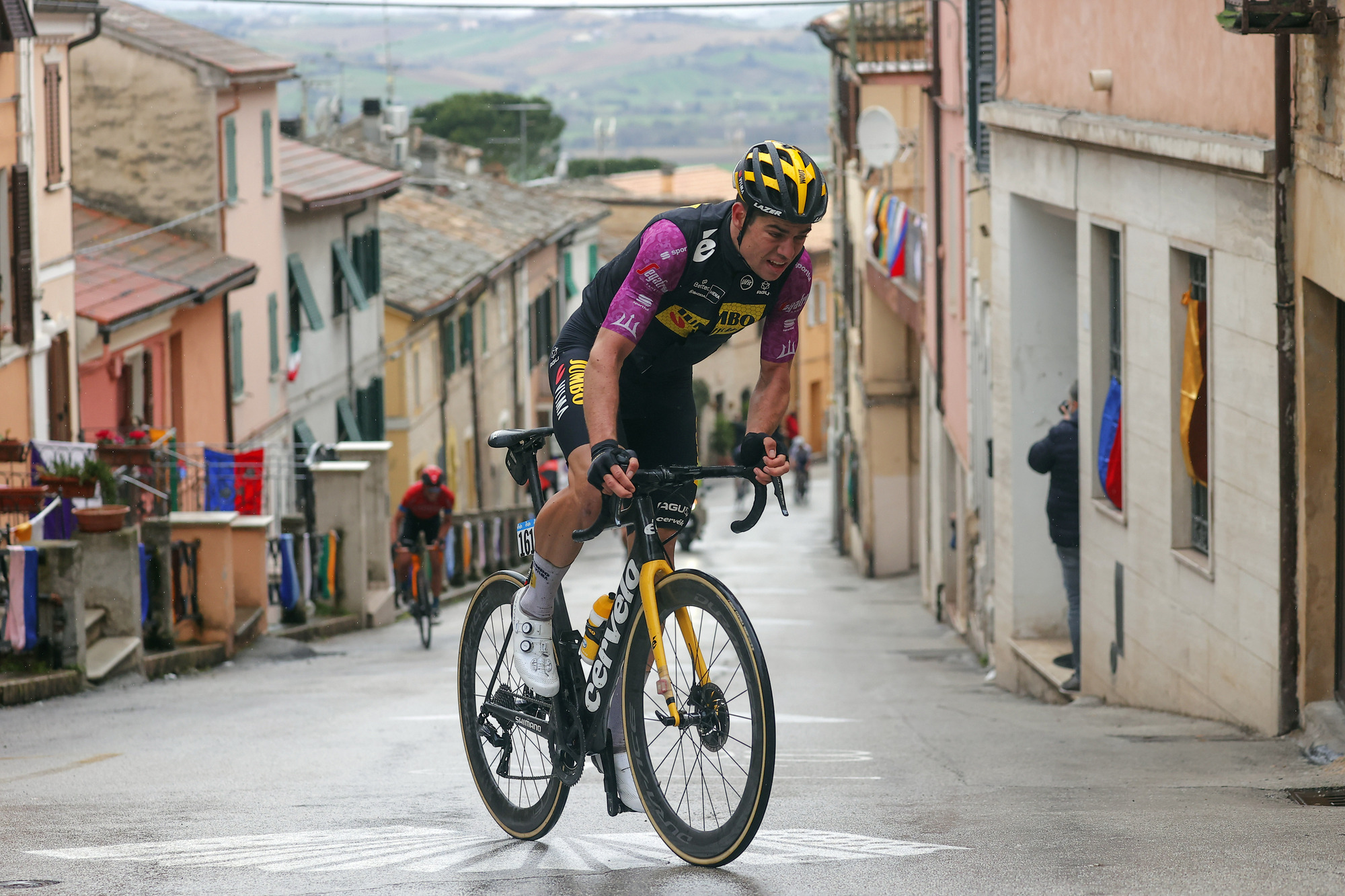 Wout van Aert lost more time to race leader Tadej Pogačar on a brutally tough stage 5 of Tirreno-Adriatico on Sunday, putting him 1:15 down with two days to go, but the Belgian said after the stage that he’s satisfied with his achievements even if overall victory is now nearly impossible to achieve.

The Jumbo-Visma leader was unable to respond to Pogačar’s acceleration on the 15 per cent slopes of the muro in Castelfidardo, 17 kilometres from the line on a wet and cold day by the Adriatic coast. He mounted a solo chase, pushing on ahead of the likes of Egan Bernal (Ineos Grenadiers) and Mikel Landa (Bahrain Victorious), but couldn’t close the Slovenian down and ended the day 37 seconds in arrears.

Van Aert put a positive spin on the day’s events, though, noting afterwards that he had still been stronger than the other GC riders that he left behind in the favourites group.

“Pogačar is stronger than everyone else, but I’m not inferior to the other GC riders. It’s nice to see that,” he said.

“I can no longer make up this difference in the sprint stage and time trial. There are still two chances of ‘net profit’ for me. We’ve been racing for five days now, so we’ll just continue like this for the next two days.

“I started with the idea that I could at least stay with Pogačar and possibly take some time back. But, when you see how everything falls apart on the last lap, it was just the law of the fittest. It’s no shame to lose to him. I have to accept that.”

Stage winner Mathieu van der Poel (Alpecin-Fenix) jumped away with 52 kilometres to go on the day, though at 20:24 in the GC was no threat to the men contending for the blue jersey and the famous ‘Sea Master’ trophy. That, Van Aert said, was part of the reason he was able to get away, not to take away from his ability, of course.

“It was a very tough when we hit the final circuit, especially with the rain. It turned out to be a survival of the fittest,” Van Aert said. “Mathieu was alone in the front quite early, but I think almost everyone in the leading group was more focussed on the GC. So was I. He benefitted somewhat from the fact he was far down on the GC, but of course he was very strong.

“In the last lap, Tadej was stronger on the climb. I came on top behind him and tried to stay as close as possible. I lost some time in the standings again, but I’m quite firmly in second place now. I gave everything I had but the strongest came in front today. There wasn’t anything I could’ve done differently.”

Tirreno-Adriatico continues on Monday with another expected sprint finish in Lido di Fermo, and a chance to add to his opening stage victory. Tuesday’s closing time trial will provide another. Van der Poel would normally be a major rival for both wins, though after the huge effort expended on the road to Castelfidardo, that looks less certain.

Alas, so epic was his solo ride to victory, after the race questions were already being asked about Van der Poel’s ability to recover in time to challenge Van Aert at Milan-San Remo next Saturday. The Belgian dismissed the idea that his rival might have depleted himself on Sunday, though.

“Mathieu is shivering in the tent every week after the cyclo-cross,” he said. “I have often thought ‘now it is all gone’, but the next day he will be back there.”