Vaughters: EF-EasyPost had to race in ‘absurd’ way to fight WorldTour relegation 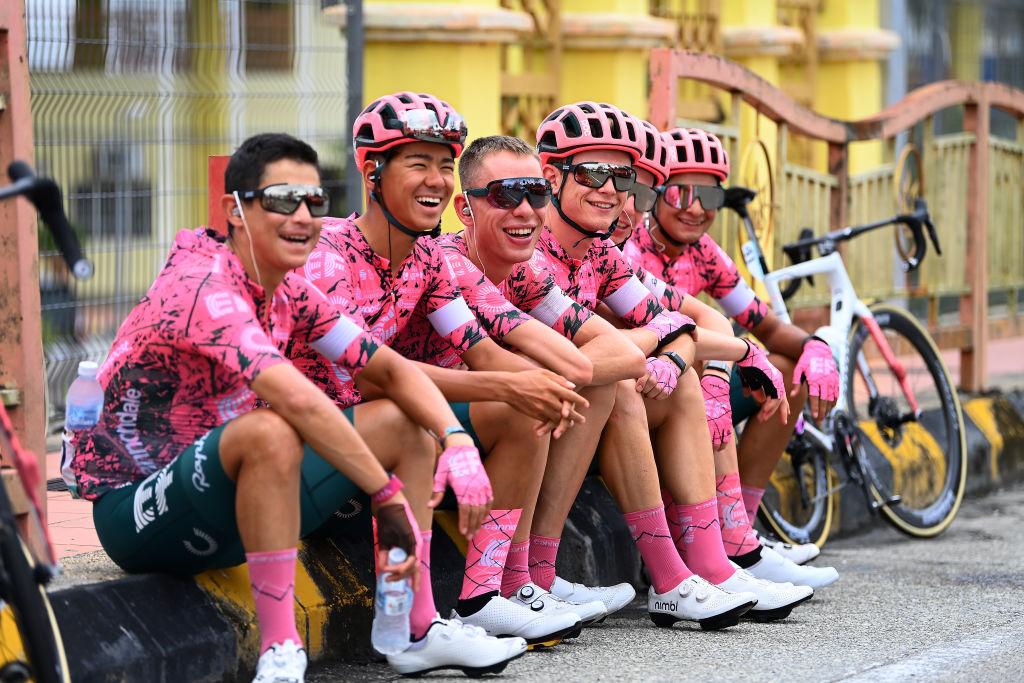 EF Education-EasyPost pulled out a strong push in the second half of the 2022 season to keep their seat in WorldTour amid the musical chairs that is the UCI’s promotion/relegation system. Now that the stress is off, CEO Jonathan Vaughters breathed a sigh of relief and reflected on the “absurd” way of racing teams had to engage in to avoid relegation.

“Next season we can concentrate on racing to race as opposed to ‘well it’d be great if we had three guys in the top 10’,” Vaughters told Cycling Weekly (opens in new tab). “I hated racing like that.

“In September, I was like ‘oh my god, we got second, sixth and ninth’. You couldn’t totally sacrifice any one person to get the race win, because we needed all three guys to score. It’s a really absurd way of racing and super annoying for everyone in the organisation to race like that when you’re just trying to sort of stack up a bunch of guys in the top 20.”

With the three-year cycle starting anew in 2023, he says, “I will look forward to not racing like that.”

He revealed that the team struggled to field teams in the early season because of illnesses, much like Israel-Premier Tech who finished 20th in the three-year rankings and may not be in the WorldTour next season if the UCI uphold the sporting criteria rules that keep only the top 18.

The World Team Rankings add the points of each team’s top 10 riders to determine the top 18 and the one-day races are a critical component, accounting for almost half the available points. EF-EasyPost were down to just 11 riders due to COVID-19 or other illnesses at the peak of Spring Classics season this season.

“In March and April, there are so many one-day races of very high level and we just zeroed out on all of them. And it was amazing how fast the ass dropped out,” Vaughters said.

Most of the lower-ranked teams added races to their calendars this year in a last-gasp fight to stay out of the relegation zone and to ensure EF-EasyPost avoid the same level of anxiety in future seasons they’ll expand their schedule a bit.

“The idea will be to send riders to some of those races that we normally might not have done, but are suited to us like a Tour of Norway or a Milano-Torino,” Vaughters said. “We’re not going to chase around races in Belgium and France that, quite frankly, we just never recruited for.”

Last week, director Charly Wegelius told Cyclingnews he wasn’t sure if teams would continue to stack their schedules.

“Obviously, it remains to be seen if the teams are going to approach that question with the same intensity as they did over the last months of the 2022 season.

“Because there are other things that push teams in other directions, be it sponsor requirements or going for other goals. But the cat’s out of the bag, everybody knows how it [the UCI points battle] can create problems for you in the last months of a three-year cycle.”

Rather than target the lucrative Classics circuit, EF-EasyPost recruited for the Grand Tours. Richard Carapaz is one rider the team will be counting on for results in more than just the Tour de France.

“He’s a very versatile rider,” Vaughters said. “He can win one-day races, he’s the Olympic champion, he can win stages at Grand Tours. He showed that in the Vuelta in a pretty spectacular form last year [with] three stages. He can win climber’s jerseys, king of the mountain competitions.”

Next year’s Tour de France, he says, “is very suited to his characteristics as a rider. He’s an aggressive rider, an attacking rider. Time trialling is a little bit of his Achilles heel, so it’s a Tour route that’s very suited to him.

“But I’m a long way from pounding my fist on the table and saying ‘we’re going to go out and beat Jumbo Visma and [Jonas] Vingegaard’. There are race favourites that are much further up the list. That being said, the route’s a nice gift from ASO. So, thank you.”