Unzué denies Movistar under greater pressure for results in 2021 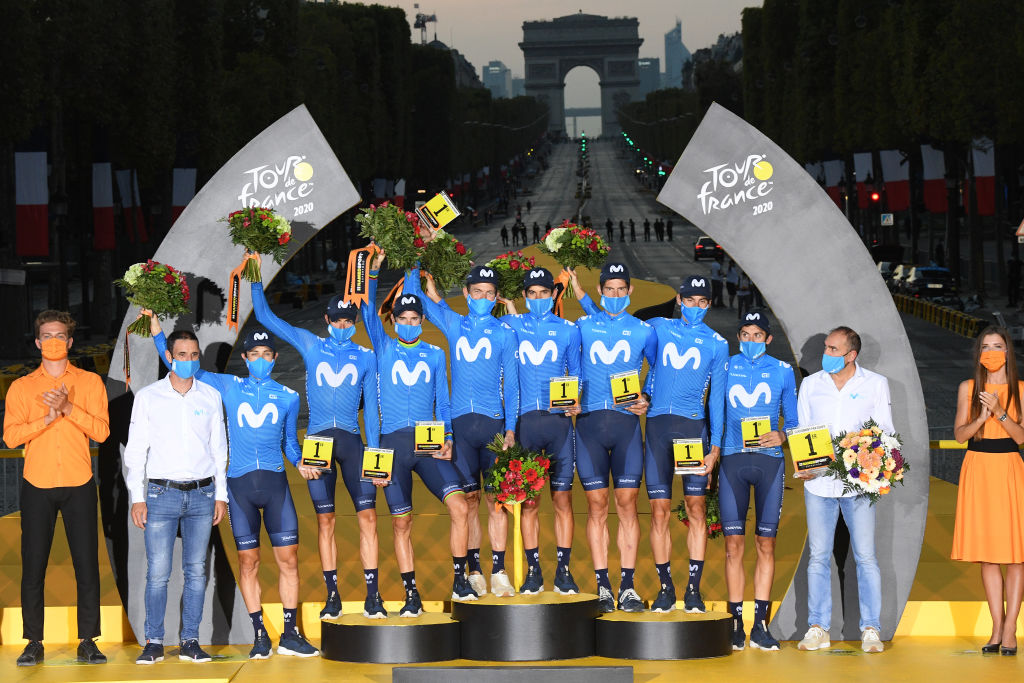 Movistar team manager Eusebio Unzué has rejected suggestions that Spain’s only WorldTour squad might be feeling the heat to get more wins in 2021 after a challenging 2020 season.

Movistar’s men’s team secured just two wins in 2020, although they claimed two top-five finishes in the Tour de France and Vuelta a España with Enric Mas, as well as netting the teams classification in both of those Grand Tours.

But when asked during the squad’s team launch if Movistar would be feeling any special pressure in 2021, Unzué answered with a categorical: “No.”

He was more forthcoming on the team’s plans to battle for top results in the Grand Tours with new signing Miguel Angel López alongside established leaders Alejandro Valverde, Marc Soler and Mas, as well as in the cobbled Classics with another new top name, Ivan García Cortina.

“It’s the same as every year, we’ll be trying to win wherever we can,” Unzué said via virtual interview from Almería, in south-east Spain, where the men’s and women’s teams are both currently at training camp.

“The arrival of García Cortina will make it more possible for us to do well in the cobbled Classics, which previously hasn’t been one of our natural hunting grounds.

“And we hope that Miguel Angel will boost the team in the Grand Tours and one-week races, that Enric continues to mature, and that Marc consolidates himself as a leader.

“Then on top of that, we have Alejandro both to offer major experience and, I’m sure, go for it in some top races himself. We’ll be fighting on all fronts, throughout the entire year.”

Another star of the 2021 team presentation was the new signing for Movistar’s women’s team, Annemiek van Vleuten, who confirmed one of her biggest targets of the 2021 season will be both the time trial and the road race in the Olympic Games.

The men’s squad also outlined the different goals for their leaders; Soler will head the squad in the Giro d’Italia, a project that was quietly shelved in 2020; López and Mas will share responsibility for tackling the Tour; Valverde’s big goal, in what was re-confirmed as his final year as a pro, will be the Olympic Games as well as a fifth Liège-Bastogne-Liège win in April.

Then in the Vuelta a España, all four leaders will be present, a plan that, albeit eight months out, looks set to make Movistar one of the teams – if not the team – to beat in the Spanish Grand Tour.

At the moment, the team’s early plans for 2020 already took something of a hit when the Mallorca Challenge was postponed from its usual late January slot, while there are strong rumours that the Vuelta a Murcia, Valverde’s home race, will move from February to May or June.

Faced by these cancellations, Movistar will start their season in the Volta a la Comunitat Valenciana in early February, while the women’s team will get the ball rolling in the one-day Vuelta CV Feminas, held on February 7 in the same easterly region of Spain.

“The race calendar hasn’t started well in Spain,” Mas, whose home race is Mallorca, admitted “but we’re hoping to start in February and take it from there.”

The pandemic has hit the team in other ways, too. López, having recovered from his crash in the Giro d’Italia, tested positive for COVID-19 and is currently in Madrid in quarantine. With the Tour among his goals, one specific objective this spring will be to work hard on his time trialling, the weakest area of his Grand Tour skill-set.

“Enric has been very consistent, while López is a different kind of rider – more of a climber and less of a time triallist,” Unzué added. “But Miguel Angel has attacking for the sake of attacking in his DNA as a racer, and that’s going to be a useful addition to the squad’s potential for success.”

Fans will be pleased to hear that plans are afoot for another fly-on-the-wall Movistar documentary, to follow up from the very popular El Día Menos Esperado of 2019.