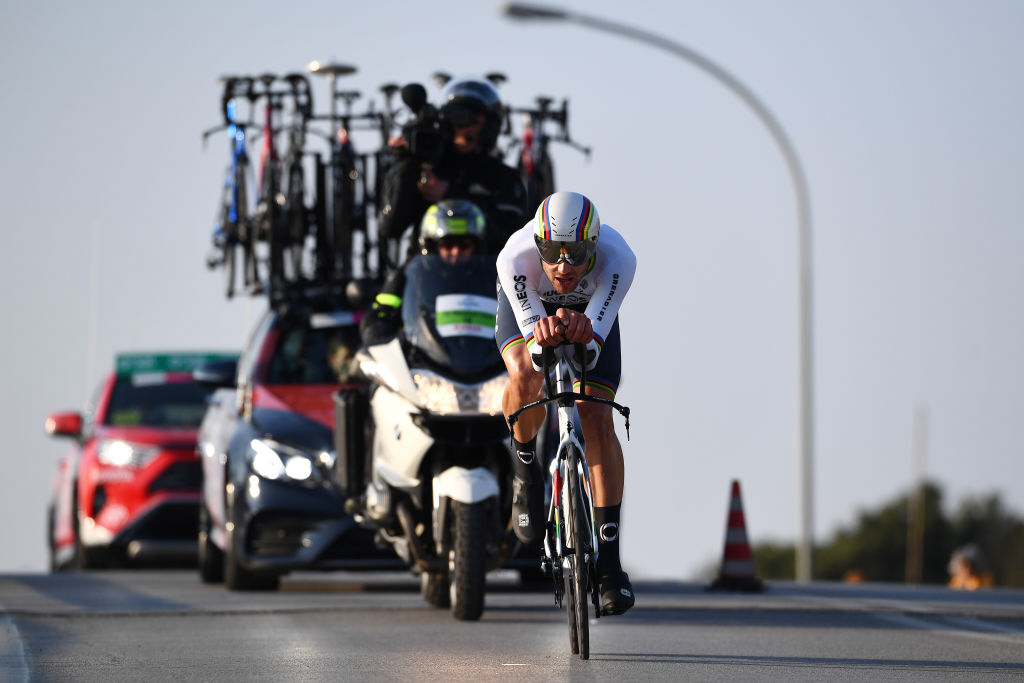 According to a report in Het Nieuwsblad (opens in new tab), the UCI has ratified a rule to keep team cars from giving their riders an aerodynamic advantage during time trials during the UCI Congress held at the Fairmont Hotel in Monaco.

The rule came after the emergence of a trend of teams following individual riders with the team car’s roof rack packed with bikes.

During Tirreno-Adriatico, Filippo Ganna was followed by a Ineos Grenadiers car stacked with eight bikes – far more than necessary for whatever mechanical problems could occur in a 13.9-kilometre test. Remco Evenepoel’s Quickstep-AlphaVinyl car was similarly adorned with a full rack of bikes. Ganna won by 11 seconds over Evenepoel, with eventual overall winner Tadej Pogacar (UAE Team Emirates) in third at 18 seconds.

The UCI did not limit the number of bikes a team car could carry. Rather, the governing body raised the distance the team car must remain behind the rider from 10 metres to 15.

Richard Kelso, an Adjunct Associate Professor at the University of Adelaide who is an expert in fluid mechanics, aerodynamics, and sports engineering, told Cyclingnews earlier this year that the larger area of a team car stacked with bikes pushes more air in front of it, reducing the speed of the airflow around the rider. This, in turn, reduces the drag and allows for a performance boost. “It is only small but it’s enough [to make a difference],” Kelson said.

Belgian professor Bert Blocken did some research on the matter, and showed the benefit could be as much as 3.9 seconds over 50 kilometres, or a full second for Ganna in Tirreno-Adriatico.

A 15-metre gap between the rider and team car would effectively eliminate an advantage, and the UCI put the rule forth in October. It became official today and will begin from January 1, 2023.

They also reportedly made adjustments to the regulations for time trial bike fits, adjusting the required distance between the saddle tip and end of bar extensions, drop to the arm pads and saddle setback.

By 2024, the UCI aims to have a industry standard solution for pinless numbers.