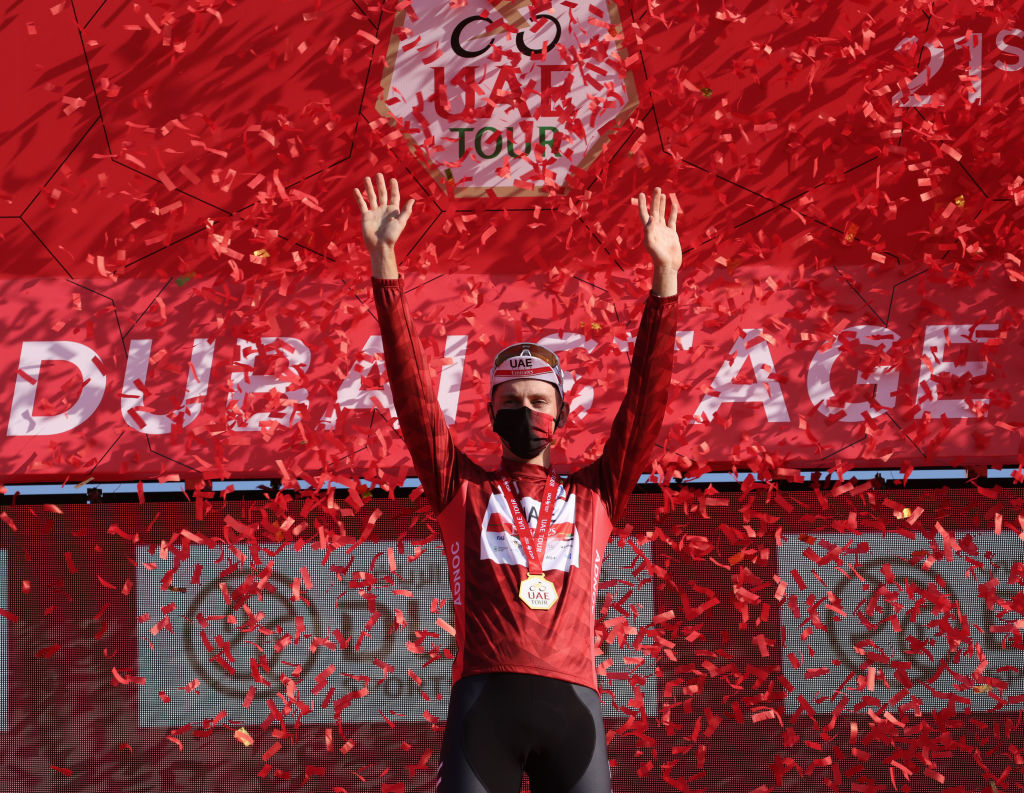 Tadej Pogačar (UAE Team Emirates) can almost taste the overall victory at the UAE Tour, despite seeing his lead cut by a 10-second penalty ahead of the final stage.

The stage 3 winner finished safely in the peloton on Palm Jumeirah on Friday, but he and teammate Jan Polanc were later sanctioned by the UCI commissaires for ‘pushing another rider’.

Both were docked 10 seconds in the general classification as well as four points in the points classification, and both received a fine of 200 Swiss Francs.

The team later confirmed to Cyclingnews that Polanc had given Pogačar a nudge forward in the final 100 metres, as the bunch was sprinting for the line.

The time penalty means that Pogačar’s overall lead on Adam Yates (Ineos Grenadiers) has been cut to 35 seconds, with João Almeida (Deceuninck-QuickStep) third at 1:02.

It’s still a healthy lead with just one flat stage remaining, but crosswinds have already struck multiple times at the race, and Pogačar isn’t planning his victory celebration just yet.

“It’s one more day closer to the finish. I’m really happy this day is gone because it was hectic in the middle but we managed to stay together. Tomorrow I hope is a similar day,” he said.

“I’m not worried about my shape – only about bad luck.”

Although it largely followed the script of a traditional flat stage, with a bunch finish, Friday’s stage 6 threatened to cause carnage when the wind struck from the side with 72km to go. It wasn’t as strong as on the brutal opening day, but a group of around 30 riders were detached for several kilometres, although no GC riders were caught out.

“There were some moments with the crosswinds but our team did a really good job keeping me safe, and we rode together all stage. It was a hard one but I’m really happy it’s over,” Pogačar said.

“I’m not the kind of guy that gives orders – we have older guys who are more experienced than me, and I trust them. I really don’t need to worry about anything, I just ride my bike and follow my teammates. That’s the advantage of having good teammates.”

Pogačar’s teammate Fernando Gaviria placed fifth in the bunch sprint, his best result of the race so far. The Colombian came into the season after his 2020 was derailed by a double-COVID-19 infection, and Pogačar looked ahead to a possible dream finale for the team at their home race on Saturday.

“For sure this is a sign he’s [Gaviria] coming back. Tomorrow is one more chance and for sure after today he’ll be more confident. I think he can do a really good sprint tomorrow. He beat a lot of good sprinters today. I think he’s coming back.

“Him winning the final stage and me winning the overall – that would be a really nice way to end this tour.”

Aussies on Tour: The 10 riders flying the flag in France