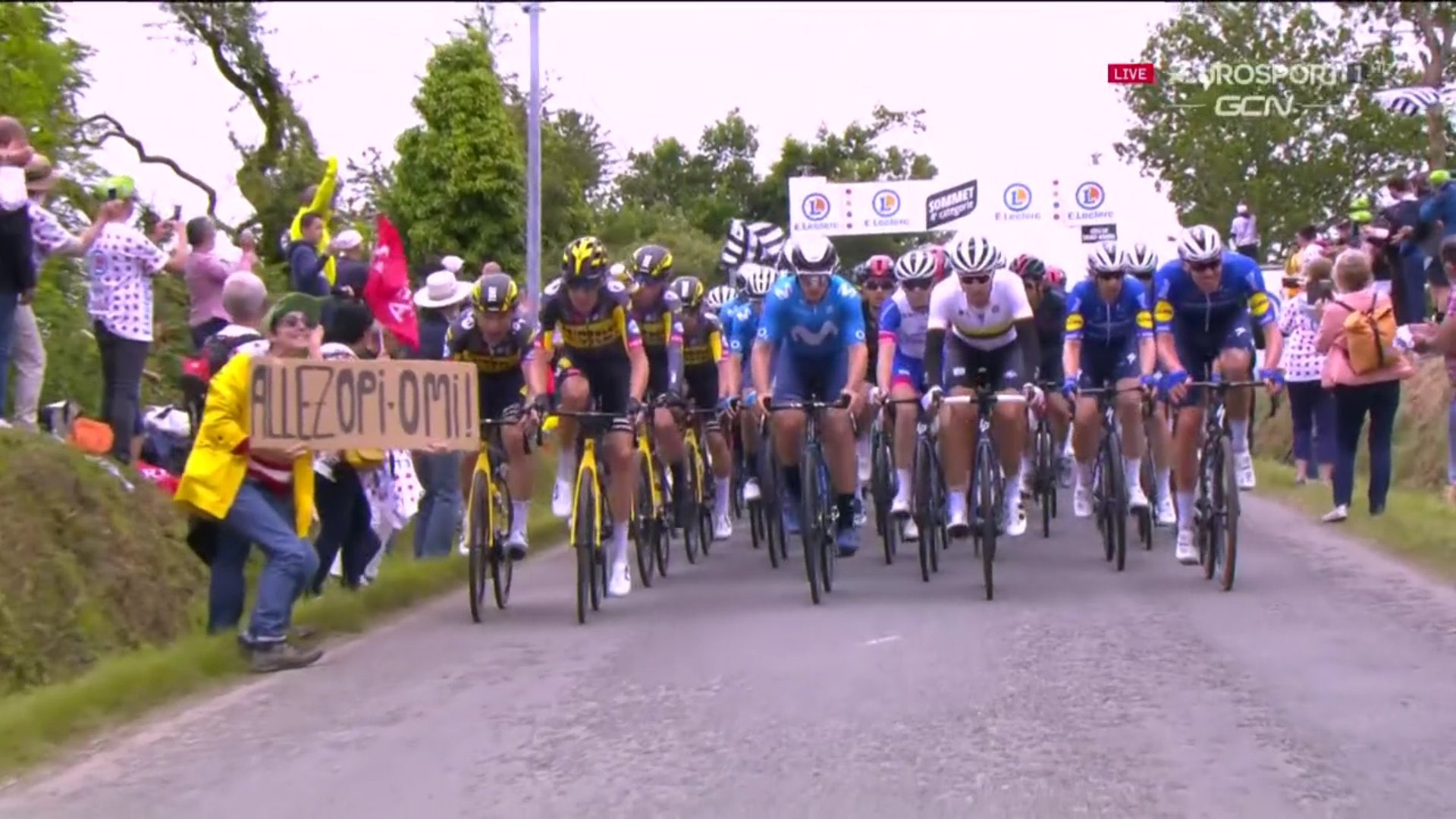 A Tour de France spectator who caused a massive crash on stage 1 could be facing legal action from the race organisers.

Race deputy director Pierre-Yves Thouault told AFP, “We are suing this woman who behaved so badly.

“We are doing this so that the tiny minority of people who do this don’t spoil the show for everyone.”

The incident came with 45km to go as the peloton was in pursuit of lone breakaway rider Ide Schelling (Bora-Hansgrohe). Jumbo-Visma was leading the peloton with Tony Martin second wheel on the right-hand side of the road.

A spectator holding a large sign that said ‘Allez Opi-Omi’ (a German term of endearment for grandparents) had their back to the peloton with the sign sticking out into the road at handlebar height. Martin had nowhere to go, with more fans and a deep culvert on the side of the narrow road and hit the sign.

Martin crashed, setting off a chain reaction that brought down almost the entire peloton.

“We had everything under control until the crash,” Martin said in a team press release. “I brought the guys to the front via the right side of the road, but crashed into the sign of the spectator. It all happened very quickly; suddenly almost the entire team was on the ground. Many spectators behave respectfully, but unfortunately not this one. Fortunately, Primoz came through it well. I hope the physical damage to myself and the other guys is manageable.”

Authorities are still seeking the person who caused the incident, according to L’Equipe.

The Landerneau gendarmerie is investigating the “manifestly deliberate violation of an obligation of safety or prudence”.

The crash, one of two on the stage, saw Jasha Sütterlin (DSM) transported to hospital with an injured hand. He was cleared of any fractures. Eight other riders received treatment from the race doctor after the incident with more injured but not officially recorded in the medical bulletin.

Defending champion Tadej Pogacar (UAE Team Emirates) was held up in the crash but rebounded to finish sixth on the stage behind winner Julian Alaphilippe (Deceuninck-Quickstep). However, his teammate Marc Hirschi suffered a separated shoulder in the crash.

A second crash with 7.9km to go, caused by a touch of wheels inside the peloton, led to even more injuries. At least 25 riders were injured on the stage, with Marc Soler (Movistar), Cyril Lemoine (B&B Hotels-KTM) and Ignatas Konovalovas (Groupama-FDJ) the other riders to abandon the race.

I hope Omi & Opi are proud of you.. On a serious note though; great to see still many spectators are loving our sport and cheering for us, but please, stay on the side of the road, not on the road! pic.twitter.com/0sU4yKR3nkJune 26, 2021

Tour of Slovakia: Halvorsen wins in photo finish on stage 3