Tour de France: General Classification at the 2021 race after stage 1 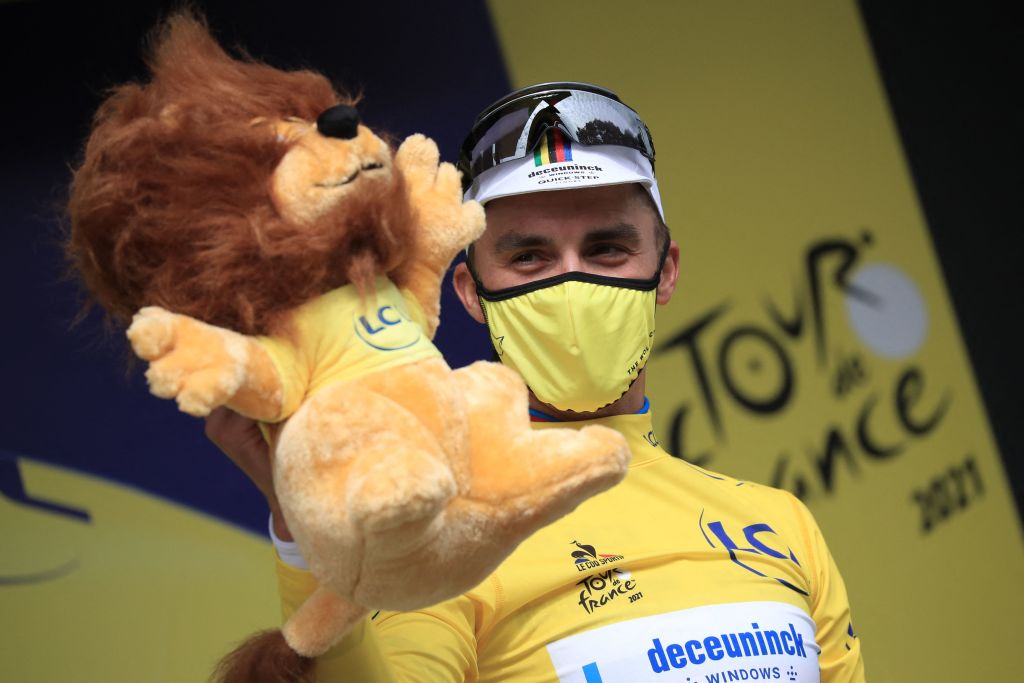 Julian Alaphilippe (Deceuninck-QuickStep) will swap the rainbow jersey worn by the world champion for the first yellow jersey of this year’s Tour de France, after winning the opening stage into Landerneau. Perfectly led out by his team, often nicknamed ‘the Wolf Pack’, on the Côte de la Fosse aux Loups, or Climb of the Wolf Pit, Alaphilippe attacked 2.5 kilometres from the finish line and held off the peloton to take the maillot jaune by 18 seconds.

Behind him, chaos reigned as the race was ripped apart by two enormous crashes and several potential contenders dropped out of overall contention. More than 150 riders, in the end, lost at least a minute to Alaphilippe.

Primož Roglič (Jumbo-Visma) and Tadej Pogačar (UAE Team Emirates), the two pre-race favourites, largely escaped unscathed and appeared to be the strongest of the GC contenders on the final climb. Roglič even sprinted to third place on the stage, taking four bonus seconds in the process and dispelling any fears that his tilt at the overall title could be ruined by his involvement in one of the day’s crashes.

The four leaders of INEOS-Grenadiers, meanwhile, were rapidly reduced to just two as Tao Geoghegan Hart and Richie Porte lost 5’33” and 2’16” respectively. Richard Carapaz lost time too, though only five seconds to the group of favourites, leaving Geraint Thomas as the best-placed rider of the INEOS quartet.

Several other teams will also have to recalibrate their strategy and goals for the next three weeks. Miguel Angel Lopez of Movistar finished a little shy of two minutes behind Alaphilippe while his teammate, Alejandro Valverde lost nearly six minutes. AG2R-Citroën’s GC challenge also suffered a huge setback as Ben O’Connor arrived in the same group as Lopez.

There was confirmation too that four-time Tour de France champion, Chris Froome (Israel Start-Up Nation), will not be adding a fifth title to his palmarès this year. Still returning from a career-threatening crash at the Criterium du Dauphiné two years ago, Froome crashed again and rode cautiously to the finish, arriving nearly fifteen minutes after Alaphilippe.

It was only a small group, then, that survived the crashes and hilly course to keep their overall hopes alive. Strong rides by Wilco Kelderman (Bora-Hansgrohe), Jack Haig (Bahrain Victorious), Enric Mas (Movistar), Rigoberto Uran (EF Education-Nippo), Nairo Quintana (Arkéa-Samsic) and David Gaudu (Groupama-FDJ) ensured that they might yet help to shape the general classification of this year’s Tour de France.