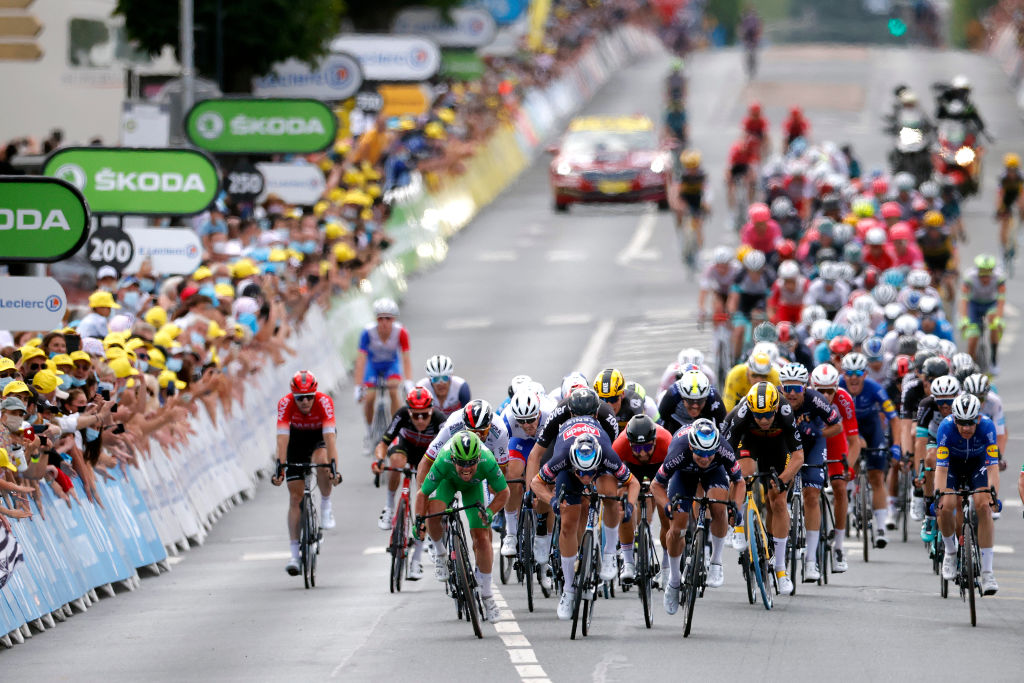 For the second time in just three days Mark Cavendish (Deceuninck-QuickStep) rocketed to a stage win at the Tour de France, winning for the third time in his career in Châteauroux (2008, 2011, 2021).

Now with 32 stage wins at the Tour de France, Cavendish used the wheels of several teammates, starting with World Champion Julian Alaphilippe, then Davide Ballerini and Michael Mørkøv, to get around two Alpecin-Fenix sprinters and take the victory.

Jasper Philipsen (Alpecin-Fenix) would follow a bike length back for second, with Nacer Bouhanni (Arkea-Samsic) in third, Arnaud Démare (Groupama-FDJ) in fourth and fifth taken by Peter Sagan (Bora-Hansgrohe).

Attacks flew early from Tours with an early breakaway of eight taking shape just 8km into the 160.6km affair, including Greg Van Avermaet (AG2R Citroën). After another 20km were ticked off the pan-flat stage, all were back in the peloton except Van Avermaet, who was joined by Roger Kluge (Lotto Soudal).

While the duo worked to gain a two-minute margin and the top points at the intermediate sprint at Luçay-le-Mâle, behind them the sprinters cranked it up for remaining points – Sonny Colbrelli (Bahrain Victorious) taking 15 points in third followed by, Mørkøv with 13, Philipsen with 11, Michael Matthews (Team BikeExchange) with 10, and Cavendish with 9. The same sprinters regrouped for the finish to score the 50 points up for grabs at the line in Châteauroux.

The catch of Van Avermaet and Kluge was made 2.5km to the line, with the sprint teams of Deceuninck-QuickStep, Alpecin-Fenix on the front with Cofidis chasing them down. Cavendish took the win and extended his lead in the points classification.

Watch the stage 6 race highlights in the video above.

Bikes of the Bunch: a two-tone Ritchey Road Logic Disc