Torque To The Hand (Or What’s The Best Torque Wrench For Bikes?)


It feels like summer is well and truly agitating in its loins (as Keats would say). It also feels like I need to show my bike a little TLC after it has spent the winter and spring doing a ‘good job of work’.

And as every beautician will know, performing some serious TLC requires a serious torque wrench.

Whilst I’ve been washing off my bike after most rides, and I give the whole drive train a (relatively) deep clean when the mood takes me, it’s time to start taking key components off the bike in order to clean (and grease) them properly. I want my summer cycling to hum to the tune of sweetly-tuned gears.

This was another of those ‘research before buying one’ posts. I’ve always known (in my heart of hearts?) what a torque wrench does (it tightens stuff to a precise amount of, er, tightness). But until my precision tightening epiphany, I’d never had cause to use one.

Having decided to buy one, I did some research and in this post I’ll share it with you (in case you, too, wish to tighten things to precise levels of tightness). I’ll also tell you which one I bought.

Note: This post contains affiliate links. If you click one and buy something, I get paid a commission. This is at no extra cost to you – you pay the same price.

Why The Amateur Road Cyclist Should Care About A Torque Wrench

The other reason I decided to buy a torque wrench followed a trip to my local bike workshop and a cycling ‘horror story’ that I heard therein.

Up on the bike stand was a beautiful celeste green Bianchi road bike. The issue was that mechanic couldn’t get the bottom bracket out of the frame in order to service it.

Campagnolo bottom brackets are notoriously more difficult to get out (versus, say, Shimano). He’d tried the bike-specification bottom-bracket-pully-outy-thingy. Wouldn’t budge. The bottom bracket had seized solid within the frame. Then he purchased a car-strength-pully-outy-thingy. No dice. The steel pincer arms were bending before the BB was moving.

It is pretty much a certainty that this expensive carbon frame now has a bottom bracket permanently fused within it. The owner of the bike will just have to ride it until the bearings down there either perish or seize up through a lack of grease.

The mechanic put the cause of the problem down to:

And then I asked myself the question that I assume 99% of you are asking right now,

“When was the last time you had the bottom bracket out of my (slightly less) expensive carbon frame?”

And then I answered (to myself),

And then I decided to buy a torque wrench.

What Is A Wrench?

It depends on where you live.

In America (and Canada), ‘wrench’ is the general term for tools that have longer handles in order to help you apply more force when tightening or untightening, say, a nut or a bolt. In the UK, a large section of this wrench universe we’d know as a spanner.

For those with an insatiable desire for more information on wrenches and spanners, can I point you to this new website I’ve found, which seems to offer a viable alternative to Microsoft Encarta.

Fine, So What Is A ‘Torque’ Wrench?

It’s a type of wrench (or spanner) where you set the amount of torque you wish to apply when tightening a given bolt.

Once you’ve set the wrench to your desired amount of torque, it should tighten your bolt of choice up to that level and no more. In short, it’s a tool for precision tightening.

Do You Need A Bike-Specific Torque Wrench?

It’s important to get a bike-specific one because most general (car) ones don’t go down to a low enough torque setting for certain ‘use cases’ on your bike. A bike torque wrench will go down to 2Nm whereas many car ones won’t go below 25Nm.

Those low force settings are for tightening more delicate components such as carbon seat posts, where you may be looking to tighten to a point that’s not a great deal more than ‘finger tight’. Apparently 5Nm is a common setting on bike, being used for bolts that hold in place stems, handlebars and faceplates (whatever they are…).

According to my trusty local mechanic, a carbon seatpost, having had a carbon friction compound applied to help prevent slippage, won’t need much more than 2Nm of torque in order to hold it in place.

Also, a bike-specific torque wrench will generally be sold with the appropriate Allen key (or hex key) heads (or sockets as they seem to be called) for use on a bike.

According to this handy reference guide of bike torque specifications, the range of potential ‘tightnesses’ for components on bike goes up to 50 Nm. The lowest torque setting shown is 5Nm (and my mechanic friend uses even lower for some jobs).

I don’t believe there is a single wrench that can cover this full range, so the compleat mechanic would have:

This video from GCN handily demonstrates the use of both a ‘big’ torque wrench and a ‘small’ one (and coincidentally just happens to show the removal and regreasing of a Shimano bottom bracket).

The video shows the larger torque wrench being used to tighten up the bottom bracket bearing cups once they’d been put back in.

You’d also use a big torque wrench to tighten the lock ring that holds the rear cassette in place (though I must admit, in my limited experience, I’ve tightened this one by ‘feel’ before).

The ‘small’ torque wrench shows up right at the end of the video, when the cranks are being reattached.

It strikes me that there are far more bolts and fittings on the bike that need a lower torque setting, than need mo’ tightness. So if, like me, you’re only in the market for purchasing one torque wrench for the time being, I’d suggest that a ‘small’ torque wrench would take wallet priority.

That said, if every bolt on your bike needs tightening to exactly the same level of torque, then madam (or sir) might like to consider a torque key.

With a torque wrench, you have the flexibility to attach a variety of Allen/Hex key heads, or other attachments specific to the job at hand.

A torque key eschews this flexibility in favour of being pre-set to a stated torque level. So, upon making the miraculous discovery that every bolt on your bike needs tightening to 5Nm, you’d buy a torque key set to exactly that.

A torque key (or Preset Torque Driver as Park Tools calls them), would look like this:

Both of my grandfathers boast a certain proficiency with tools amongst their palmares. My paternal one was a joiner; my maternal grandad was a fitter in the Middlesbrough ship yards.

Sadly neither is still around to proffer advice on how to get the best out of a torque wrench. So I had to use the Internets as a kind of techno-grandad.

I discovered the following whilst sucking on a Werthers Original:

Which Torque Wrench Should You Buy?

So a bit of research suggests that we have a wealth of options. Here are the runners and riders:

Park Tool (which I’ve only just realised doesn’t have an ‘s’ at the end of Tool) is the tool manufacturer of choice if you want to mimic a pro cycling team mechanic, you like the colour blue and you have lots of money.

The TW-5.2 is a ‘small torque wrench’ with a range of 2-14Nm, adjustable in itsy bitsy 0.4Nm increments. It succeeds the TW-5, which had a slightly minimum torque setting of 3Nm (the brute!).

In terms of use cases, this smaller torque wrench is for tightening the clamp on your seat post, fitting new stems and other handlebar based fun.

The TW-5.2 comes in a (bright blue!) protective case, but doesn’t come with any attachments. It’s quite expensive, but sometimes you have to stump up the cash if you want to look like a pro.

And this one is even more expensive.

This is Park Tool’s ‘big torque wrench’, with a range of 10-60Nm, in increments of 0.25Nm (again succeeding a forerunner that could only go down to 12Nm).

You’d use this one for messing around with (okay, tightening) your bottom bracket and cassette lock ring – that sort of heavy duty thing.

Whilst, like its smaller sibling, the TW-6.2 also doesn’t come with a head/socket set, I’m sure that ownership would make me feel powerful and manly. Every little helps.

(*Probably not that mysterious – both are ‘own brands’ for tools sold by online cycling retailer, Wiggle.)

No matter, it’s still a great choice. Adjustable between 2Nm – 24Nm. A selection of 10 bits (one of which is a longer reach attachment) makes this the most flexible toolset of the ones I’ve found.

At the time of writing, there are 2,231 (count ’em!) reviews on the Wiggle site, giving an average rating of 4.6 out of 5. With those stats (and the very reasonable price), it’s safe to say that this would be a solid choice.

Another sensible choice. Nice little zippy case. Seven bits/heads (which must cover most, if not all, the potential use cases on bike).

(If only it had ‘Professional’ in the title…)

This looks like the cheapest option, considering it comes with 5 bits (4 hex/Allen; 1 Torx). It’s convenient too, in that the bits stay in the handle when not in use.

It does look a bit plasticky to me, but the reviews on Amazon and elsewhere suggest that this isn’t a problem in use.

I suppose I’m saying that I think it looks a bit …. ugly (whisper it).

From the cheapest adjustable torque wrench to one of the most expensive. But this one is digital and seems to involve a battery. It makes a warning sound when you hit your desired torque setting. 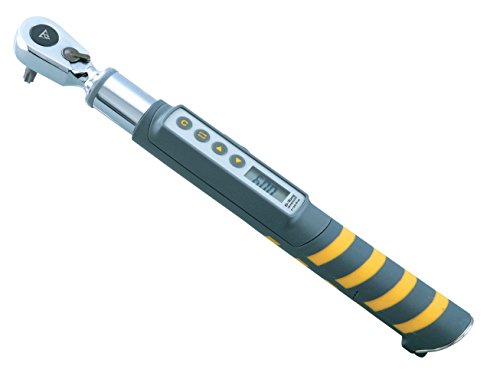 I’m featuring this one because I like the name. I think it’s a strange mix of Italian and Spanish, which (with the help of Google Translate) may or may not mean: “Effect Butterfly Right Force 2”.

Yowzer though. It’s a pricey torque wrench. And not a battery in sight…

So Which Torque Wrench Did I Buy?

It was clear early doors that I would get more use out of a little torque wrench than a big one. So that was an easy first decision.

As tempting as it was, I didn’t go for the Park Tool version. If all of my tools were blue, I’d feel compelled to keep it that way. My cycling tool kit (such as it is) is already a mix of manufacturers.

Either way, the LifeLine tool has served me well. I’m sure all the other options are equally good. You certainly can’t go too far wrong with a Park Tool (and they are blue…).

Do you own a torque wrench that you would recommend? Let me know in the comments, and I might add it to future versions of this post.

Monty is an enthusiastic road cyclist with only moderate talent. He started Sportive Cyclist in 2013 to record the journey to his first 100 mile ride, the RideLondon 100. Over time the blog has expanded to include training advice, gear reviews and road cycling tales, all from the perspective of a not-very-fit MAMIL. Since you’re here, Monty would also like you to check out his YouTube channel. Also, Monty really needs to stop referring to himself in the third person.