Toon Aerts: The podium at Worlds means much more than a win in a small race 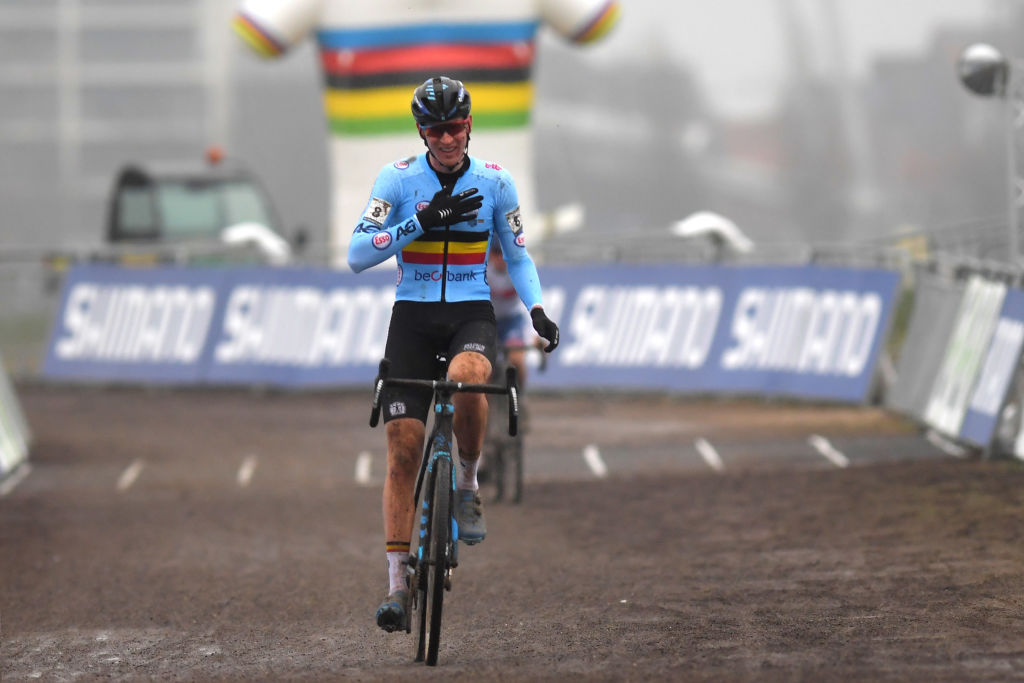 The elite men’s race at the UCI Cyclo-cross World Championships was predicted to be a duel between Mathieu van der Poel (Netherlands) and Wout van Aert (Belgium) and that turned out to be correct. The two protagonists left their rivals behind after eight minutes of racing, and eventually Van der Poel extended his reign with a third title.

A more difficult prognosis to make was who would be joining them on the podium. Laurens Sweeck was considered the most likely among the Belgians, being the sand specialist, but in the end it was 27-year-old Toon Aerts who was best of the rest.

“For me it’s nice to be on the podium with these guys who’re the best, not only in cyclo-cross but in cycling as a whole. It’s only a medal for third but to me it’s a really nice one,” Aerts told Sporza in their on-site studio. It was his third consecutive third-place finish at the Worlds.

Aerts is far from an unknown in cyclo-cross. He’s the European champion of 2017, Belgian champion of 2019, and double World Cup winner in 2018-2019 and 2019-2020. This season he had three early wins in October, one at the Superprestige round in Gieten, then a string of top 10s, but no additional wins.

There were multiple reasons he was not high on the radar for Ostend. Aerts struggled with the sores of a collision during training as well as the team tactics from the strong Pauwels Sauzen-Bingoal riders who worked together against him in the regular season action. Earlier in the season when Van Aert and Van der Poel hadn’t launched their cyclo-cross campaigns, compatriots such as Eli Iserbyt, Michael Vanthourenhout and Sweeck were showing splendid form.

“This was a strange season in which there was always something in the way. There was always someone better like Iserbyt, Vanthourenhout and Sweeck, then there was my accident or a strong team to fight up against. Now that we’re through the tough winter season, I manage to get on the Worlds podium; that’s worth much more than a win in a small race,” Aerts said.

Aerts featured in the main chase group on Sunday that also included a quartet of Belgian riders – Quinten Hermans, Iserbyt, Vanthourenhout, and Sweeck, riding about half a minute behind early leader Van Aert. At the end of the second of eight laps, Aerts left his compatriots behind.

“I certainly wasn’t bad today. I was worried that I rode away from the other guys too early. Riding together allowed me to stay on the wheels for a while and save energy. That allowed me to do a few good passages through the sand but then I ended up alone again. That cost a lot of energy,” Aerts explained.

During the second and third laps, Aerts had the leaders in sight as they were losing time: Van der Poel went over the handlebars and Van Aert punctured. He’s the only rider who could judge what he saw from the top duo.

“Honestly, at first it seemed like Wout had the cards in his hand to ride a splendid solo. During the three first laps I saw Van der Poel riding in front of me each time we rode at the seashore. He didn’t seem to be riding away from me as quickly as one would expect. To me it seemed like he was only accelerating away when Wout punctured and got going again. During the first half of the race Wout seemed to be better, to me,” Aerts noted.

Mano a mano for bronze

During the second half of the race, young Tom Pidcock (Great Britain) went up and over the chase group of four Belgians. The runner-up from last year’s World Championships wasted no time and launched his pursuit of Aerts.

“He briefly bridged up with me but it was obvious that it cost him a lot of energy. Straight away in the sand he made a mistake and got stuck, whereas I had a good passage through the sand. Once again it was mano a mano,” Aerts said.

When hitting the final circuit of the eight-lap race, Aerts seemed to enjoy a comfortable bonus of 13 seconds over Pidcock, with Sweeck starting to threaten the 21-year-old British rider’s fourth-place position.

Aerts once again had a good passage during the first half of the course in the sand, but Pidcock unleashed in the second rolling part of the course on the muddy grass sections of the Hippodrome. Aerts had to sprint to hold off Pidcock and clearly was pleased to secure third place.

“During the final lap it was clear that this was our swan song. During the final lap, Pidcock was slightly faster but it was enough [for me] to finish third.” Aerts grabbed the final podium spot, ahead of Pidcock and Sweeck, who were fourth and fifth respectively.

Keep Your Training On Track With New Workout Alternates