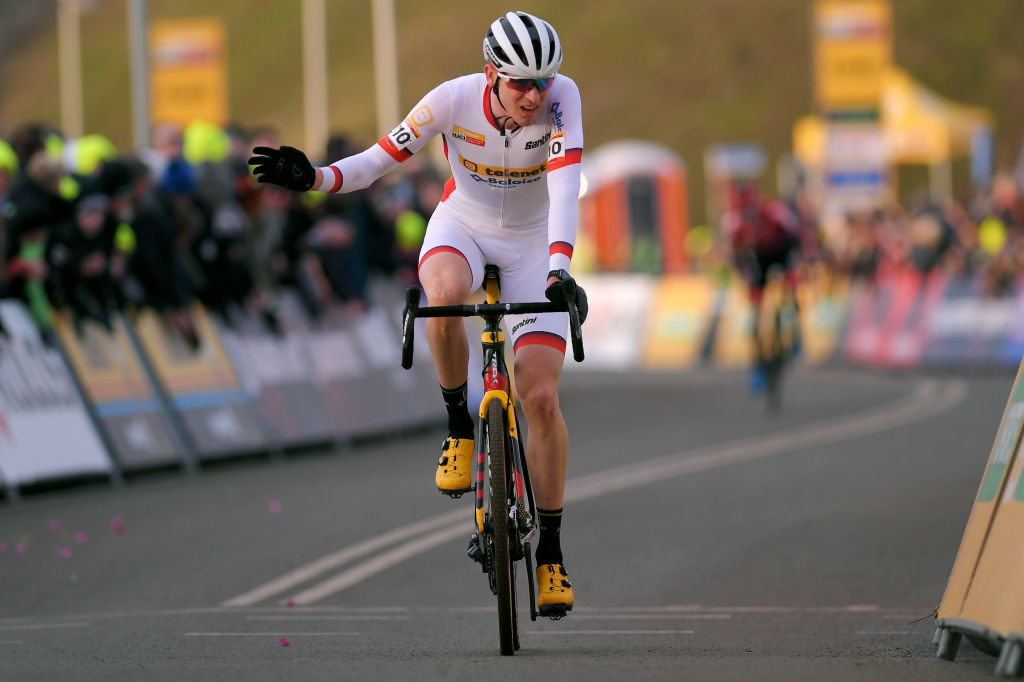 Two-time UCI Cyclo-cross World Cup series winner Toon Aerts is ready to reclaim the title after missing out in the 2020-2021 season. He’ll have four Baloise Trek Lions teammates to aid in his quest, which begins Sunday afternoon in Waterloo.

Aerts comes to Wisconsin as the number one-ranked rider in the UCI cyclo-cross rankings and has high expectations for the entire year. What he won’t find in the US are the two rivals who have been part of many World Cup duels, as Mathieu van der Poel (Alpecin-Fenix) and Wout van Aert (Jumbo-Visma) will not be in the Waterloo-Fayetteville-Iowa City rotation because of their road calendars.

“They had such a busy summer, like the Tour de France for example. Then they prepared for Road Worlds and Paris-Roubaix now. The preparations are now for the whole year,” Aerts told Cyclingnews.

“They’re probably going to race with us from the end of November or the beginning of December, maybe. At that moment, we’ve already done maybe 15 races, so we aren’t that fresh anymore. And they won’t be at their top level, so we’ll see how the levels will be. Every race without them is a greater opportunity, a greater chance of getting the victory.”

Van Aert won the overall standings of the World Cup last season, with Van der Poel in second position. Aerts found himself in unfamiliar territory in fourth place after he had taken back-to-back titles in the 2018-19 and 2019-20 seasons.

This season, the UCI has greatly expanded the World Cup series. After planning 14 rounds in 2020-2021, reduced to just five rounds because of the COVID-19 pandemic, this year’s calendar has 16 rounds in six different countries.

Aerts has come into the season on strong form, taking an early-season C1 win last week in Gieten at the opening round of the Superprestige series, aiming to take an early lead in the World Cup.

“Because it will be a long season this year, we have 16 World Cups compared to normally eight or nine the previous seasons, it will be busy. We have a lot of weekends with Saturday and Sunday races, there are some travels to Italy, that makes it sometimes harder,” said Aerts.

“And that is why I try to be as good as possible from last week in Gieten. We also had three race weekends before that also, C2 races. Gieten was the first C1 race on the European schedule. It worked out pretty well with the victory immediately, so I’m looking forward to what this week will bring over here in the US.”

Aerts likes having a block of three races on the trip to the US, getting the most out of the international travel. This year the Waterloo World Cup is followed on October 13 in Fayetteville, a first-time World Cup event and a preview to Worlds, and the established Iowa City World Cup on October 17, which also includes C1 and C2 events at Jingle Cross. It was back in 2015 when CrossVegas in Nevada ratcheted up the stakes and joined the World Cup circuit, then the distinction moved to the Midwest for a tandem of events in Iowa City and Waterloo.

“It’s not just one race, like in the beginning of US World Cups at CrossVegas. It can be tricky with the jet lag problem, you have to adapt when you come here. And if it’s for only one race, it’s not easy and is bad for your performance in the weeks after. Now with three races, it’s OK and very positive.”

The showcase event for Aerts and his teammates this week will be in Waterloo. The circuitous track lays among a Wisconsin landscape of dairy farms and cornfields and winds around the Trek compound where the team’s equipment is designed. The riders look forward to interactions with the people who design their equipment and racing in front of this team.

“It’s the opening round of the World Cup this season and for us, it is double special. For the team, we’re here to talk to the engineers of our new bikes, talking to the manufacturers of our new wheels, things like that. For us, it’s not just being here to race but it’s also the whole experience to be here at the factory where our bikes are created.” the 27-year-old said.

Aerts said his career goals are to win titles in the cyclo-cross ‘Grand Slam’ – Worlds, European Championships and Dutch Championships – as well as overall crowns in the top three race series – World Cup, Superprestige, and X2O Trofee. He has four of the six and begins the quest for more this season.

“Two of those, the X2O Trofee and World Championships are still on my bucket list but not ticked off. Those are the main goals again for this season,” Aerts said. “I’ve won the World Cup two times, but a third time would be very nice.”

Danny MacAskill’s latest is a stunt with a cause