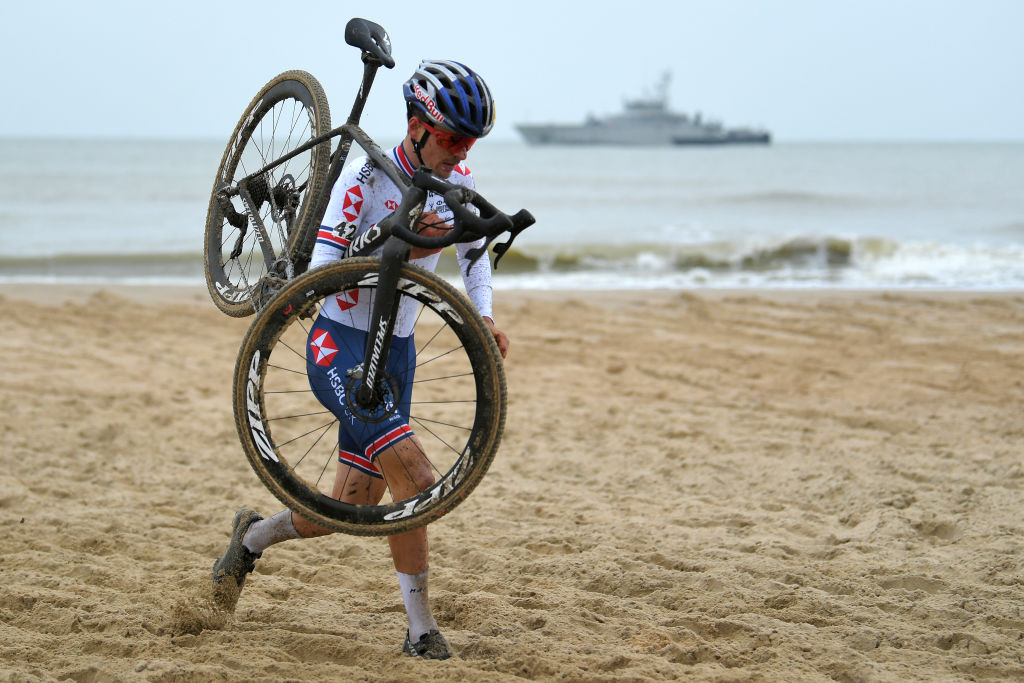 There was much ado about an anticipated one-hour battle for the cyclo-cross rainbow jersey between Mathieu van der Poel (Netherlands) and Wout van Aert (Belgium), a two-up sprint never materializing for Van der Poel’s fourth World title. After Van Aert lost ground due a punctured front wheel on the third lap, taking the air out of that story line, the drama moved to the final podium spot.

Belgian Toon Aerts and Briton Tom Pidcock took over in a dual for the bronze in the elite men’s race at the UCI Cyclo-cross World Championships. From the sand and surf and muddy track at Ostend, Belgium, Aerts would sprint for bronze, his third consecutive placement at Worlds, as a fast-finishing Pidcock closed him down in the closing corners.

“I got a good start, but I just didn’t commit so I went back a bit then in the first corner I was on the left and in the deep sand, I had to get off and run a bit, so I was far behind and it took me a while to get going,” said Pidcock, talking post-race with his British Cycling team, who called his performance a “gutsy ride”.

After the first lap, the two favourites, Van der Peol and Van Aert, had a significant gap on the field, and Pidcock was in 10th position. By lap four, he powered his way from a chasing group to get Aerts in his sights, with the duo now contending for the final podium spot.

By lap six on the bridge section, Pidcock made his way briefly into third position, but Aerts overtook again on the sand, creating a small gap of seven seconds.

“I got to Toon (Aerts) and we hit the sand and I didn’t make it to the sea, so I did a really bad sand lap and lost some time,” Pidcock said about not grabbing the opportunity to solidify the catch of Aerts. The Belgian then pushed the gap out to 16 seconds, while Laurens Sweeck (Belgium) closed down on the British rider.

“On the last lap, I was literally one or two seconds behind him – I’d pulled back 12 seconds – but coming into the finish he was in front of me so I wasn’t going to catch him,” added Pidcock.

The 21-year-old last raced in the U23 division at Worlds in 2019, when he took the World title. In 2020 he raced in the elite men’s field, taking the silver medal ahead of Aerts. This year Van Aert was back, along with defending champion Van der Poel, and Aerts was not about to abandon a podium spot, no matter how well Pidcock was performing.

Pidcock had nine podiums in 13 races this season, with one of those a win in December at the Superprestige race in Gavere. With the home-field advantage, Aerts competed in double the number of races and had 11 podiums, the 12th coming at the Worlds.

Now Pidcock will transition from cyclo-cross to his road cycling career, telling Cyclingnews earlier this week he looks forward to donning the Ineos Grenadiers kit for “phase two is about being a full pro in an elite team. That starts on February 1.”

Quinn Simmons: I did not deserve to be suspended