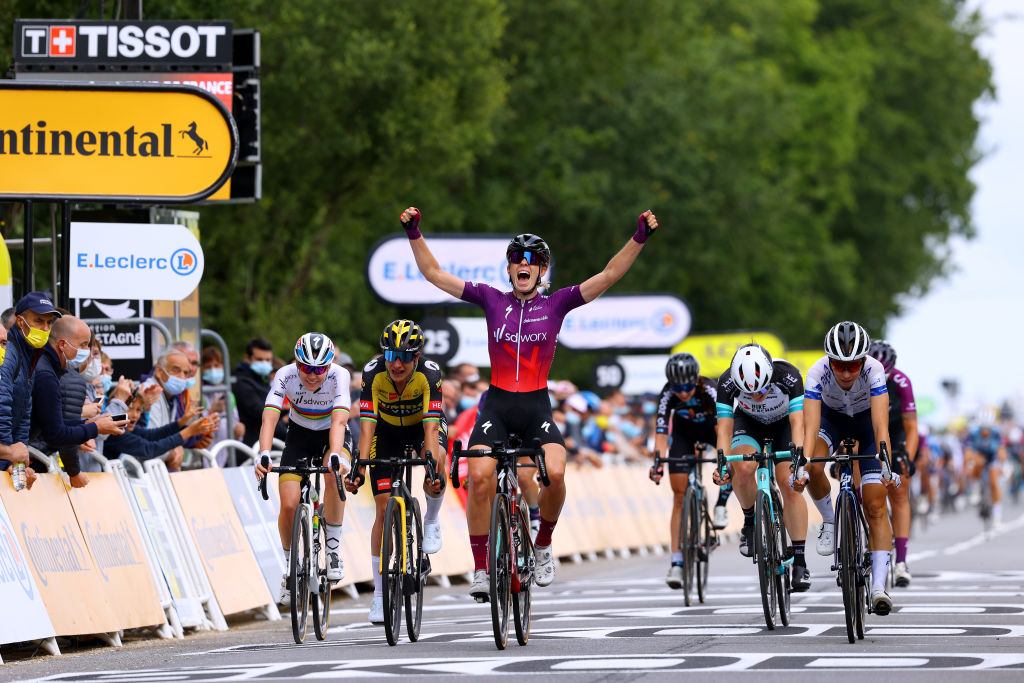 Having just taken one of the biggest victories of her career so far in La Course by Le Tour de France, Demi Vollering (Team SD Worx) was close to speechless in the finish area in Landerneau. She had just beaten superstar Marianne Vos (Team Jumbo-Visma) and a host of other world-class riders in the sprint of a group of eight to win the final edition of La Course by Le Tour de France. The one-day race is to be replaced by an eight-day stage race from 2022, to start on the final day of the men’s Tour de France.

This was Vollering’s second big classic win of the 2021 season after another group sprint victory in Liège-Bastogne-Liège where she beat Annemiek Van Vleuten (Movistar Team), among others. In both cases, the support of world champion Anna van der Breggen was crucial to Vollering’s success.

“We knew that we need a hard race if we want to win here. We hoped that it would be a hard race, and if not, our plan was to make it hard ourselves. It was already quite hard from the beginning, which was good for us. Niamh [Fisher-Black] did a really good job, she was in the breakaway the whole time, Chantal [van den Broek-Blaak] was also at the front of the peloton the whole race. Nikola [Nosková] worked in the beginning, and Anna did a really great job in the finish. Once again, we showed really good teamwork, and it is very cool that I could finish it off,” Vollering said at the finish.

The team was alert from the start, with Van den Broek-Blaak and Roxane Fournier joining the early attacks. However, none of their moves managed to get away from the peloton. Nikola Nosková had the job of bringing back breakaways that did not suit the team until one rider was eventually let go by the peloton.

Led by 2017 world champion Van den Broek-Blaak, the trio now stayed near the front of the peloton to control the race. On the first of four ascents of the Côte de la Fosse aux Loups, a move initiated by Trek-Segafredo’s Lucinda Brand was joined by Fisher-Black who represented the purple-clad team in the twelve-rider front group.

On the second ascent of the Fosse aux Loups, Van der Breggen singlehandedly reduced the 30-second gap to only a few metres, and Fisher-Black immediately accelerated to keep the pressure up. When the peloton made contact with the front group, Fisher-Black continued to ride at the front until Vollering herself made her first move as the climb flattened out. This attack was followed by Lizzie Deignan (Trek-Segafredo), Cecilie Uttrup Ludwig (FDJ Nouvelle-Aquitaine Futuroscope), and Liane Lippert (Team DSM) right away, and Vollering could not get away from the peloton that had shrunk to a group of 28 riders.

Going into the penultimate lap, Fisher-Black went to the front again to join a move begun by Ruth Winder (Trek-Segafredo) that developed into another group of twelve. As most big teams were represented, there was no urgency to chase in the peloton, and the group was large enough for Fisher-Black not to have to do too much work – an ideal situation.

The young New Zealander had no trouble following the attack by Mikayla Harvey (Canyon-SRAM) on the penultimate ascent of the Fosse aux Loups, and back in the peloton, Van der Breggen covered an attack by Uttrup Ludwig.

When the front group was caught due to Team Jumbo-Visma working for Vos and the race came down to the final ascent of the Fosse aux Loups, Van der Breggen was the strongest rider of the team and followed Katarzyna Niewiadoma (Canyon-SRAM) when she attacked. Vollering was just behind and came back to the front when the climb flattened out, and Van der Breggen now put herself into the service of Vollering, closing down a final move by Uttrup Ludwig.

On the finishing straight, Vollering stayed on the wheel of Vos, and Van der Breggen accelerated from the back of the group 450 metres from the line, forcing Vos to jump after her. When Vos came around the world champion, Vollering could launch her own sprint from Vos’ slipstream, edging ahead on the final 25 metres to win.