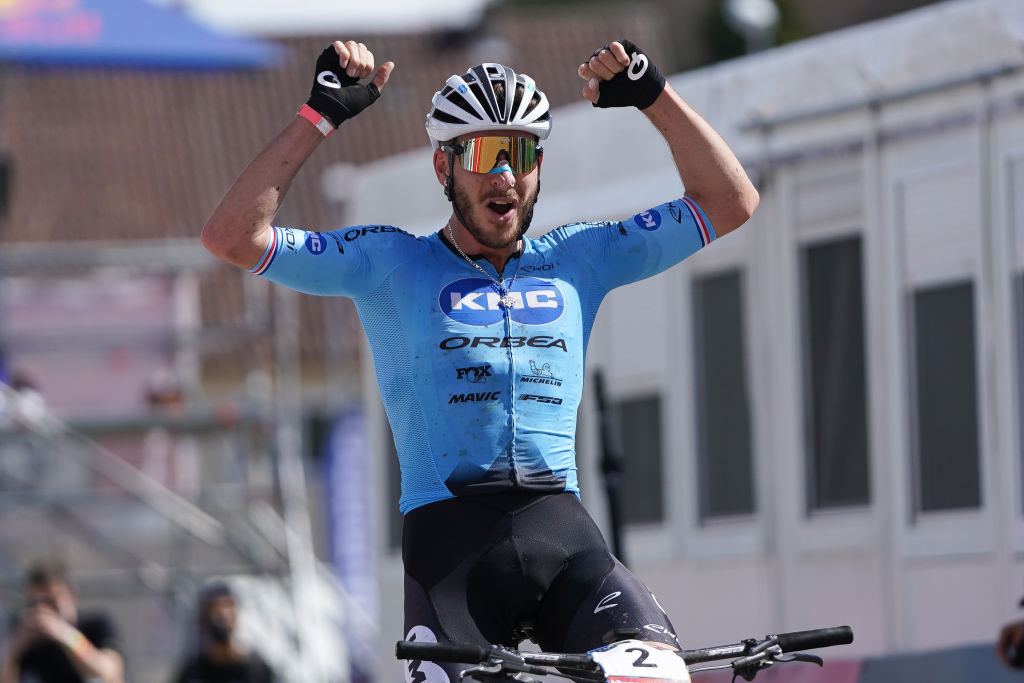 Koretzky was one of the most aggressive riders for the entire men’s race, leading out on the first of eight laps. While the pace was fierce, by the halfway point there were still 17 riders in contention, including Henrique Avancini (Cannondale Factory), Short Track world champion Christopher Blevins (Trinity Racing), Ondrej Cink (Kross Orlen), Filippo Colombo (Absolute-Absalon-BMC) and overall World Cup leader Mathias Flueckiger (Thomus RN Swiss Bike).

Flueckiger had not yet locked up the men’s World Cup title coming into this weekend, and needed a 12th place or better in the Short Track to take the overall title before Sunday’s final cross-country.

Avancini and Cink took over from Koretzky in the pacesetting, with Flueckiger always lurking in the top five. However, Koretzky was just biding his time, and attacked on the same last climb of the last lap as Richards in the women’s race. Only Avancini could go with him initially, but the Brazilian could not hold the Frenchman’s pace on the final straight, as Koretzky took the first Short Track win of his career.

Colombo out sprinted Blevins for third, while Flueckiger finished fifth to win his first World Cup title. Koretzky’s win moved him into second in the overall standings, bumping Cink down to third.

“I just tried to stay on a good wheel,” explained Koretzky, “and not attack too early in the race. I just tried to wait for a good moment and attacked on the last lap, and then go full gas to the end. It was just amazing in the last few metres, to have the win. I’m super happy to win my first XCC race.”

Flueckiger was extremely pleased to have the pressure off for the World Cup title, “It’s crazy; I couldn’t have imagined it one year ago. I’ve had a really great season … I’m so tired now! What we have done with the team is really great, and this has been growing all year. Now I’ve won the World Cup overall, and that’s really crazy.”