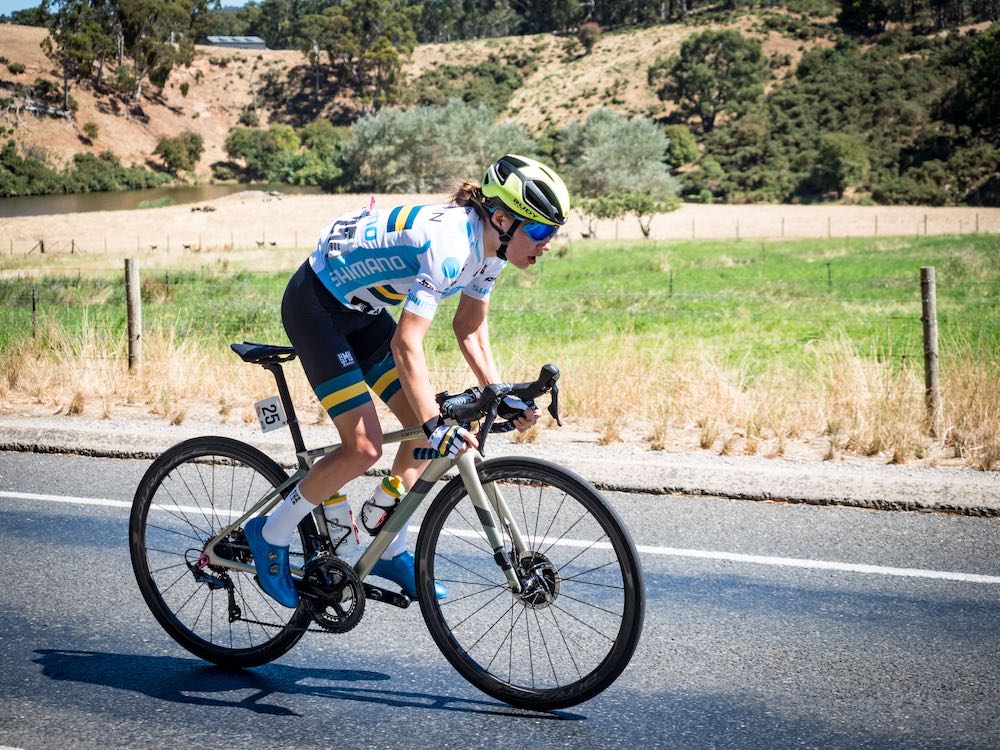 Sarah Gigante (Team Garmin Australia) stretched out a powerful lead on the overall classification during stage 2 of the racing at the Santos Festival of Cycling, with her long solo effort giving her a buffer of almost two minutes before she heads into the Willunga stage of the National Road Series event.

It has been two days running that an Australian time-trial champion has set themselves up on the overall by playing to those solo riding skills . On stage 1 in the men’s race Luke Durbridge (Team BikeExchange) carved out a lead of nearly two-and-a-half minutes with an 80 kilometre solo effort. It is also not the first time Gigante has used the tactic, securing victory during the last block of NRS racing in 2020 with a 55 kilometre break, but that time there were no Women’s WorldTour racers on hand to try and chase her down.

“Sarah was just ten times better than the rest of the field and she had some strong WorldTour riders dropping off behind her and she just kept putting in more time,” said Peta Mullens (Roxsolt LIV Sram) who was leading the overall at the start of stage 2. “We were kind of turning to each other saying, ‘How is she still riding away?’ The speed she must have had up the road, so kudos. I’m happy to hand over the jersey to that effort.”

It was an audacious move by the 20-year-old to jump out of the field and face the prospect of riding out the front alone for more than 40 kilometres but Gigante is one of those bike riders who doesn’t mind trying to achieve the unachievable.

“The plan was for me to go hard over that QOM but it was a long long way out so our first realistic plan was probably for the sprint or maybe a late flier,” said Gigante. “Our hopeful plan was for me to get away on the climb but I certainly didn’t think it would work. But I tried and it did work.”

Playing into her hands was the lack of an early organised chase.

“There was a bit of panic with the other teams. They were desperately negotiating who was going to do the chase and we were just laughing to ourselves because we knew that Sarah was pretty strong,” said race teammate Maeve Plouffe.

The bubbly rider off the bike, who quickly turns into a fierce competitor on it, signed up with Team Tibco-SVB at the start of 2020. Still Gigante’s international racing has been limited, as with the COVID-19 pandemic in her debut year the professional cyclist and university student didn’t make it overseas as much as expected.

However, Gigante has given her rivals plenty of reminders that she should never be underestimated. The Victorian rider took Australia’s best off-guard in 2019, claiming the elite and Under 23 national title in the road race in her first year out of the junior ranks. Then in 2020 she took the time trial title double.

After her stage 2 performance there are not likely to be any at the South Australian race who will underestimate Gigante as the women’s field gets set to race up Willunga Hill for the first-time during the highly anticipated stage 3.

The 1:53 buffer on her nearest rival, Peta Mullens and the 2:10 she has on Team BikeExchange climber Lucy Kennedy, who sits in tenth, means she is sitting in a powerful position on the overall classification of the four-day race, particularly given her comfort level when the road rises.

“I definitely love hills so I am sure I will have a blast but I don’t know how I will go, especially after that long time trial effort. But I’ll give it a go,” said Gigante.