Ryan Mullen: I want to repay Sam Bennett for the faith he’s shown me 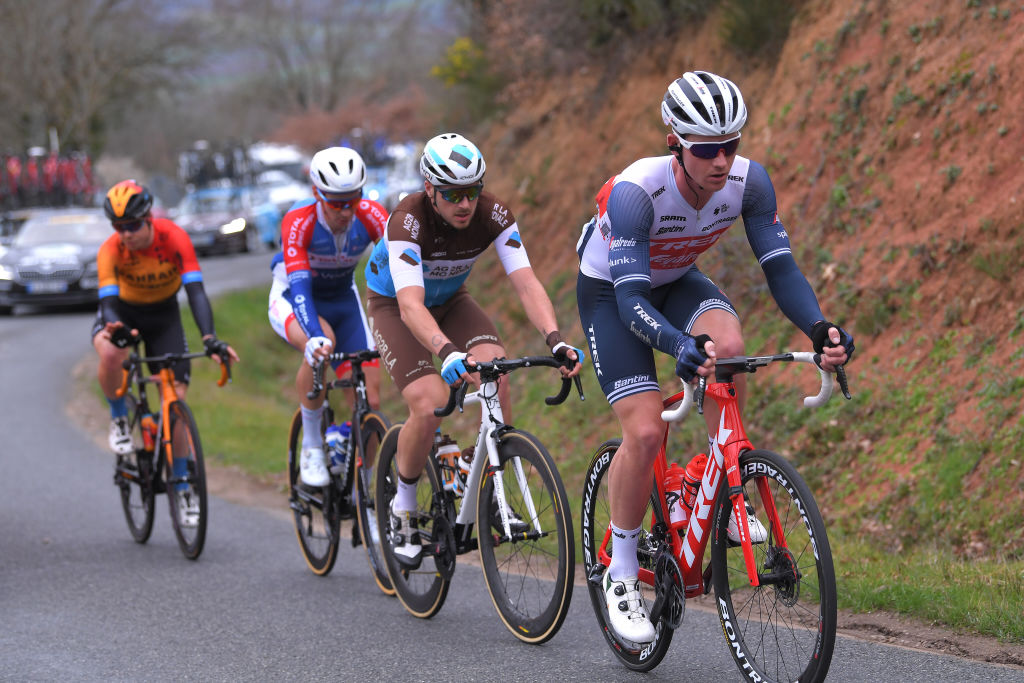 In Ryan Mullen’s eyes, he is about to link up with the best leadout train in the world, and it’s hard to disagree after Bora-Hansgrohe dipped their toes into the transfer market and signed Danny van Poppel, Shane Archbold and sprinter Sam Bennett for 2022.

Mullen spent four years at Trek-Segafredo and even had a contract extension offer from the American team but when Bennett came calling and approached the 27-year-old, the offer of a new environment and the chance to work with one of the fastest riders in the world was too good to turn down.

“Sam reached out to me and expressed an interest in wanting to work with me,” Mullen told Cyclingnews at the recent Rouleur Live event in London.

“I’d already had the offer from Trek and Sam wouldn’t tell me the team he was going to but he certainly got my attention. His manager is my manager and neither of them would tell me which team it was for about a week. I had no clue. I had a sneaking suspicion it could have been Ineos at the time, but the more I thought about it, the more I discussed it with my family. But Sam had seen me in Classics and leadouts and said he’d love to work with me. I felt the same, and in my eyes, he’s the best sprinter in the world, so just to be asked by him was an honour anyway. I weighed it all up and I wanted to branch out.”

Mullen certainly wasn’t unhappy at Trek-Segafredo but 2021 didn’t pan out as he would have hoped. There were errors with his training – although he doesn’t blame the team – and he took longer than expected to find his form. He ended the year with both the Irish national road and time trial titles, and he played a pivotal role in Trek’s success in the Classics, but after four years on the American team, he was faced with a tough choice. At Trek, he had established long-lasting friendships with many of the riders, not least Jasper Stuyven and Mads Pedersen.

“We’d watch either Wolf of Wall Street or Bad Boyz before every race and it was hard to walk away from that. Being Mads’ teammate took ten years off my life,” he said in reference to the times when Pedersen would hide in their hotel room before jumping out to surprise him.

“I was shaking all the time but he was great. He and Jasper are normal guys off the bike and heroes on them. I have great friends at Trek but I had to ask myself if I wanted to leave. The answer to that was no, but I had to also ask myself whether it would benefit my career to stay. It was a really hard decision and it wasn’t like I just snapped Bora’s hand off and left. It’s hard to say what my thought process was but I think I just needed a breath of fresh air. I hadn’t gone stale but I needed a new role.”

Bora-Hansgrohe have brought Bennett back after two years away, but they’ve bolstered their entire leadout around the Irishman. The last time he was on the squad he had to share sprinting opportunities with Pascal Ackermann, which led to a tense environment and Bennett’s eventual departure for QuickStep.

With Ackermann out of the picture and on his way to UAE Team Emirates, the entire sprint core can revolve around Bennett, and Mullen is set to play a pivotal role in helping to deliver success. There will be opportunities for him to develop his time trial skills but the overall priority will be to ensure that Bennett and the rest of the leadout train are well-positioned with roughly a kilometre to go in races.

“They want me for the leadouts but they also think that there’s a lot of untapped potential with my time trialing. I agree with that because I took my eye off the ball with that at Trek as I concentrated more on the Classics. I’ll do a lot of races with Sam, especially in the early season when we’ll want to nail the leadouts early and get the confidence up straight away. Then hopefully we’ll do a Grand Tour together,” Mullen added.

“For me though, as long as Sam’s happy, I’m happy. I don’t want to let Sam down or Ralf Denk. I want to repay the faith they had in me in those early-season races. Not to put pressure on Sam but for him, picking up where he left off has to be really important. I just want to lead the new leadout because we’ve not worked together before. I needed the extra pressure on me, and the extra pressure to perform. If you’ve got the world’s best sprinter on your wheel you really don’t want to fuck it up.”

Bennett has little to prove in the sport given his green jersey success at the 2020 Tour and countless other victories, but after injury-ravaged his 2021 campaign and his former boss Patrick Lefevere tried and failed to smear his reputation in the media, the Irish sprinter will certainly be eager to let his legs do the talking once he starts racing again.

“He was motivated in the camp we had in October,” Mullen said.

“He wanted to ride even when it was snowing. He’s a racer, and every start line he’s on he wants to win. He had the setback this year with his knee and how he was treated in the media probably didn’t help. It probably took its toll mentally, so I guess there will be an incentive to come back and pick up where he left off. As soon as he gets that first win they’ll just start flowing.”

“We’ve not discussed it yet but there’s me Danny, Shane and Sam. I’ve thought about it in my head and I think I’ll be first, and then Shane will battle through before Danny takes it up with around 200. That’s what I’d imagine in my PlayStation reality. I’d like to think that it’s the best leadout. Danny and Shane are fast and I’m also quite fast and I’m confident that I can bring someone from 5km to go to 1km to go.”