I’ve had roof racks on every car I’ve owned that wasn’t a convertible. But the Front Runner Outfitters Slimline II Roof Rack Kit is different — it’s based on a platform instead of crossbars, making it more versatile.

The Front Runner Outfitters Slimline II Roof Rail Rack Kit is functionally and visibly different than all the other racks I’ve owned.

They primarily carried bicycles and sometimes duffel bags on an accessory tray mounted to a pair of load-bearing crossbars. They all looked similar and visually tagged my vehicle as a cyclist’s. But not so with the Front Runner Outfitters Slimline II Roof Rail Rack Kit.

Front Runner designed the bike, boat, and other mounts around the load-bearing platform instead of crossbars. This strategy opens up many advantages that make the roof rack system much more versatile and, in my opinion, way better looking.

The Platform Is the Key

The Slimline II platform (MSRP $715) is vertically svelte, standing only 2 inches tall, but the 45.9 x 45.5-inch dimensions delivered the maximum amount of real estate on top of my 2018 Subaru Outback. There wasn’t much roof left uncovered. The lack of crossbars made the surface of the platform a large and uninterrupted load-bearing surface.

And because every component of the roof rack has T-track channels in it, anchoring points were infinite for Front Runner bike mounts and accessories as well as anything else. And the tracks accepted standard M8 threaded mounting hardware that is widely available.

The all-black T6 aluminum platform harkens back to Front Runner’s origins. Initially developed for a 1988 Land Cruiser 70 and 1992 Mercedes G-Wagen, a South African design team flexed their engineering, manufacturing, and off-road racing backgrounds. The aesthetic carried over well, even to my rather mundane-looking Outback. 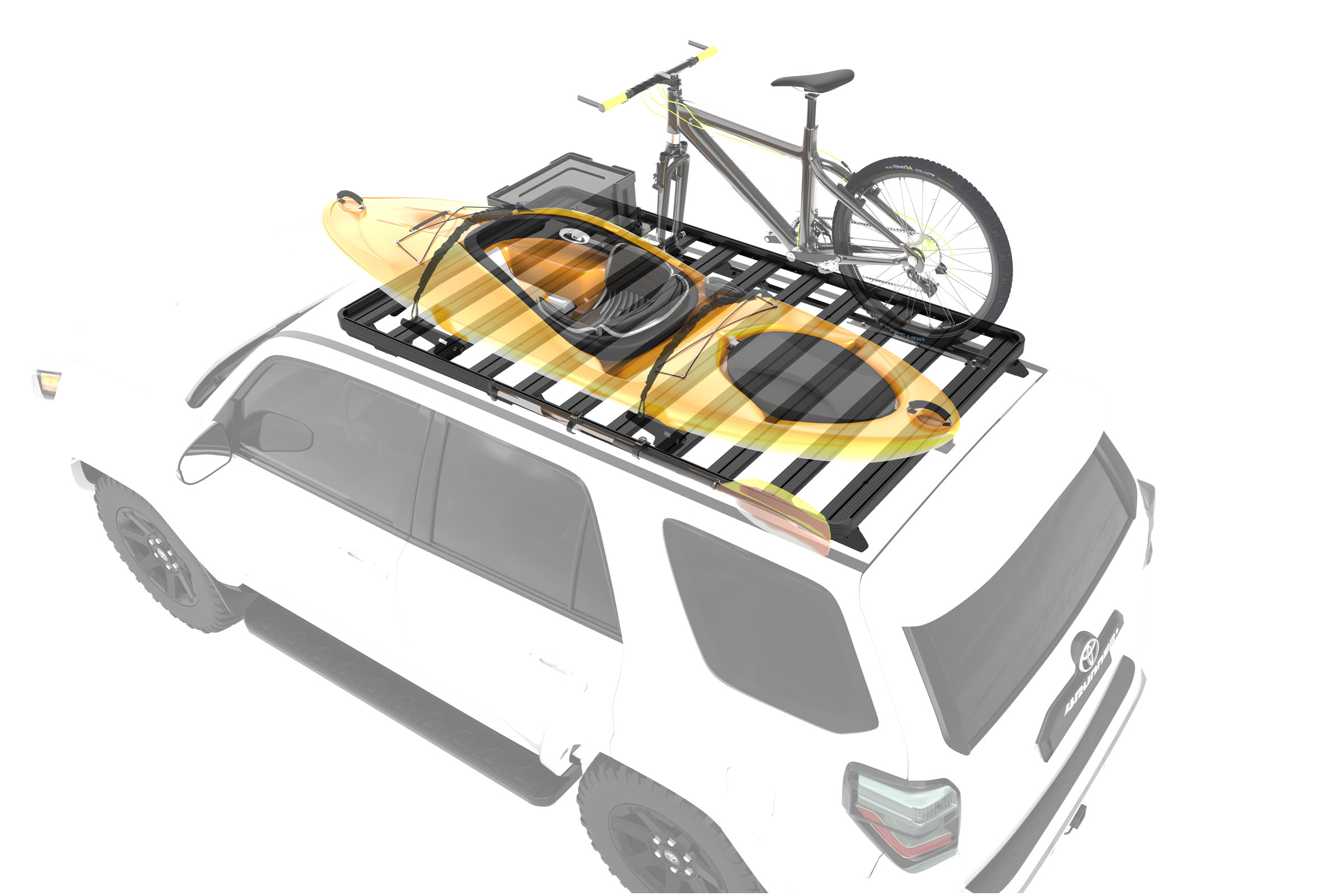 The rack arrived flat-packed and unboxing it created a daunting pile of powder-coated parts and stainless steel fasteners. But once I laid the seven platform slats and perimeter frame pieces on the shop floor, the logic hit me, and it was easy to assemble with the directions.

I also mounted a Front Runner Thru-Axle Bike Carrier and a Fork Mount Bike Carrier while the platform was still in the shop. They directly bolted to the T-slots in the platform slats, so mounting positions were infinite and easily altered.

I attached four custom feet and a wind fairing to the bottom of the platform. I lifted the entire platform (44.9 pounds) plus the two bike mounts to the top of the vehicle without issue.

The pair of bolt holes on each of the four feet lined up with the threaded inserts in the roof used for retractable factory luggage rack crossbars (removed). And there was plenty of adjustment room to center and align the rack as desired.

The entire assembly and installation process took an unhurried 2 hours. 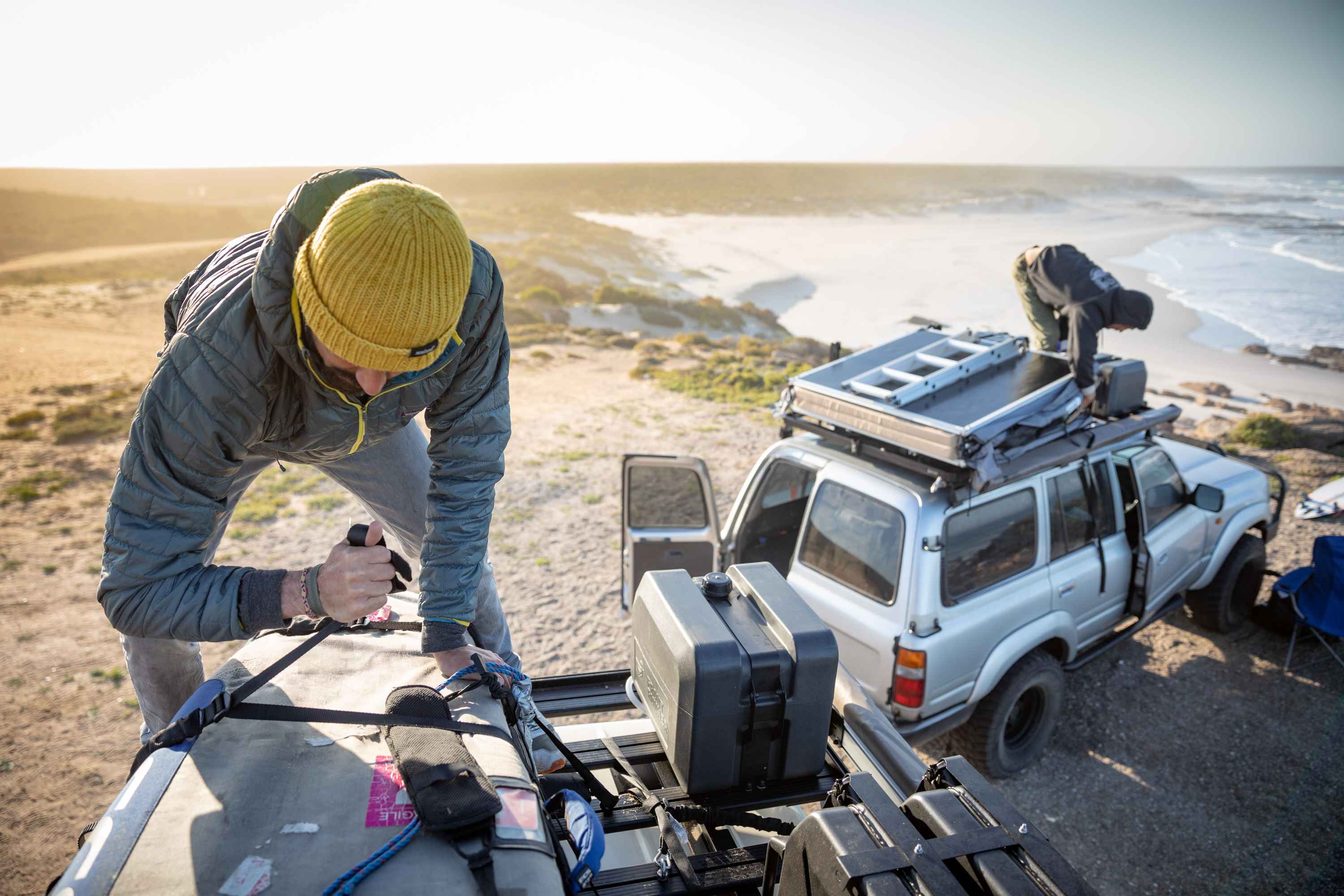 The Slimline II carried road, gravel, and mountain bikes securely. And mounting the bikes required the same steps as any other thru-axle or fork mount system. Because of all the various axle standards, sometimes I had to use an adapter (for a 10mm axle), and in one case (Fox Step-Cast suspension fork), the Front Runner fork mount wasn’t compatible.

The bikes were supremely stable even on rough dirt roads, similar to other fork mount systems, but the Front Runner was even more so. I believe it was due to the bike rack components bolting directly to the platform instead of being clamped. The direct bolting left zero freedom of movement at the connection of bike mount to rack.

And the same could be said for the rack-to-car junction. All contact points were directly bolted to factory threaded inserts in the roof instead of clamping around a crossbar or OEM luggage rack.

The low-profile fairing was effective. The wind noise was noticeable at highway speeds, but it was a low din without any whistling that I’ve always had with roof racks with round profiles. Even with two bikes on top, the wind noise hardly changed, and again, no harmonic whistling.

The Platform Makes the Difference

I have always used roof racks to haul bicycles primarily; putting anything else on always involved workarounds. I’ve had racks with a basket of some sort clamped to the crossbars. But the dimensions and usability were sometimes limited by where the crossbars had to mount on the vehicle, and they were never nearly as large as the Front Runner Slimline II Roof Rack platform.

Not only did the large size immensely improve usability, but the T-channels that run across each of the platform slats and on the perimeter frame offered infinite, solid, and secure anchoring points with the Front Runner Tie Down Rings (but any M8 threaded eyelet works).

I often loaded bouldering crash pads on the rack, which are so bulky they’re hard to pack in hatchbacks or sedans without losing the majority of storage and passenger space. I used the excellent Front Runner Stratchits straps to secure the pads and apply enough tension to keep them down, even at highway speeds in strong headwinds.

Because the platform is the basis of the rack instead of crossbars, it sits much lower than baskets that attach on top of crossbars, which mount on top of OEM luggage rails. I believe this low stack height improved mileage and wind noise regardless of what was on the rack compared to crossbar systems.

I have used a roof rack continuously since I got my driver’s license — that’s 37 years! I’ve had every major brand on top of everything from economy sedans and sports cars to lifted 4×4 trucks. The Front Runner Outfitters Slimline II Roof Rack was the first one based around a platform instead of crossbars. That made all the difference in security, usability, aerodynamics, and looks.

Because there are no crossbars, the platform could be enormous, and I could anchor accessories and luggage anywhere. The bike mounts and anchors were bolted directly to the rack instead of clamped, so they were super secure. And because the load-bearing platform connected directly to the vehicle roof through OEM threaded inserts, the total stack height was comparatively low, improving aerodynamics.

And although this is subjective, I much preferred the black, low-profile platform look to the taller crossbars and associated bike mounting systems of the other racks I’ve had. It looked more “overland” than “sporting.” Maybe now I can be a cool guy.