Canyon just added new two major options to their popular all-mountain Spectral trail bike – affordable alloy frames and mixed wheelsize options (plus lots more when you dive into the details… 27.5, 29, alloy, kids, CFR!). Of those two big shifts, affordable alloy might be the most appealing news, but we’ve been riding a carbon mullet bike for the last few weeks. And after more than half a year on the Spectral 29, we’ve found the new mixed-wheel size, coil-shock CLLCTV build to be a much more playful, more enduro-leaning ride that thrives on steep & rough trails… 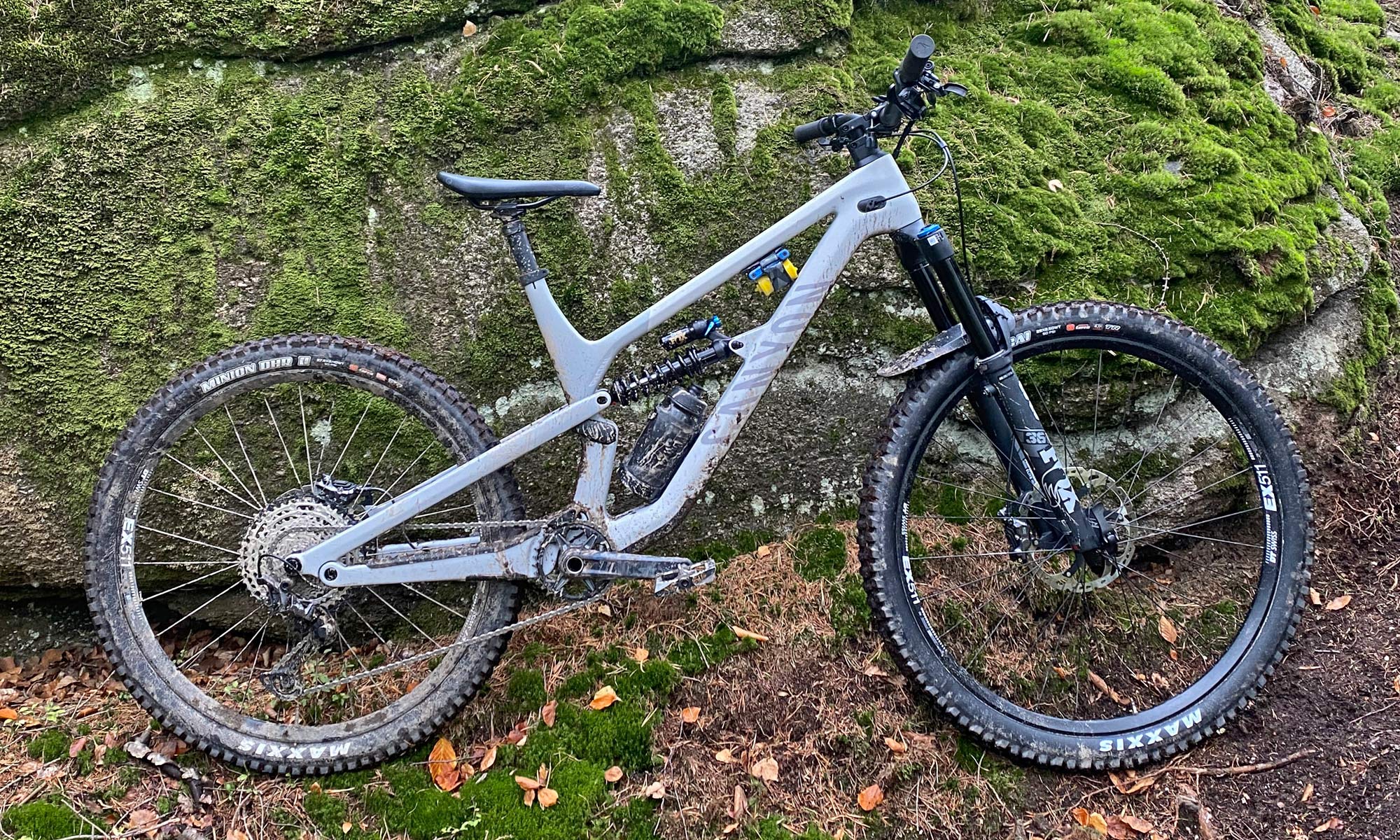 Beyond dropping the cost of entry for the popular and super capable Spectral trail bike, Canyon has added both 27.5″ and 29″ versions of the new Spectral – in either carbon or aluminum. The secret trick there, both wheel sizes share the same core geometry. Both smaller wheels on smaller sizes (XS-L) and larger wheels on larger sizes (S-XL) share the same chainstay length, bottom bracket drop, and both head & seat angles. The idea being that every rider should get the same well-thought-out ride. 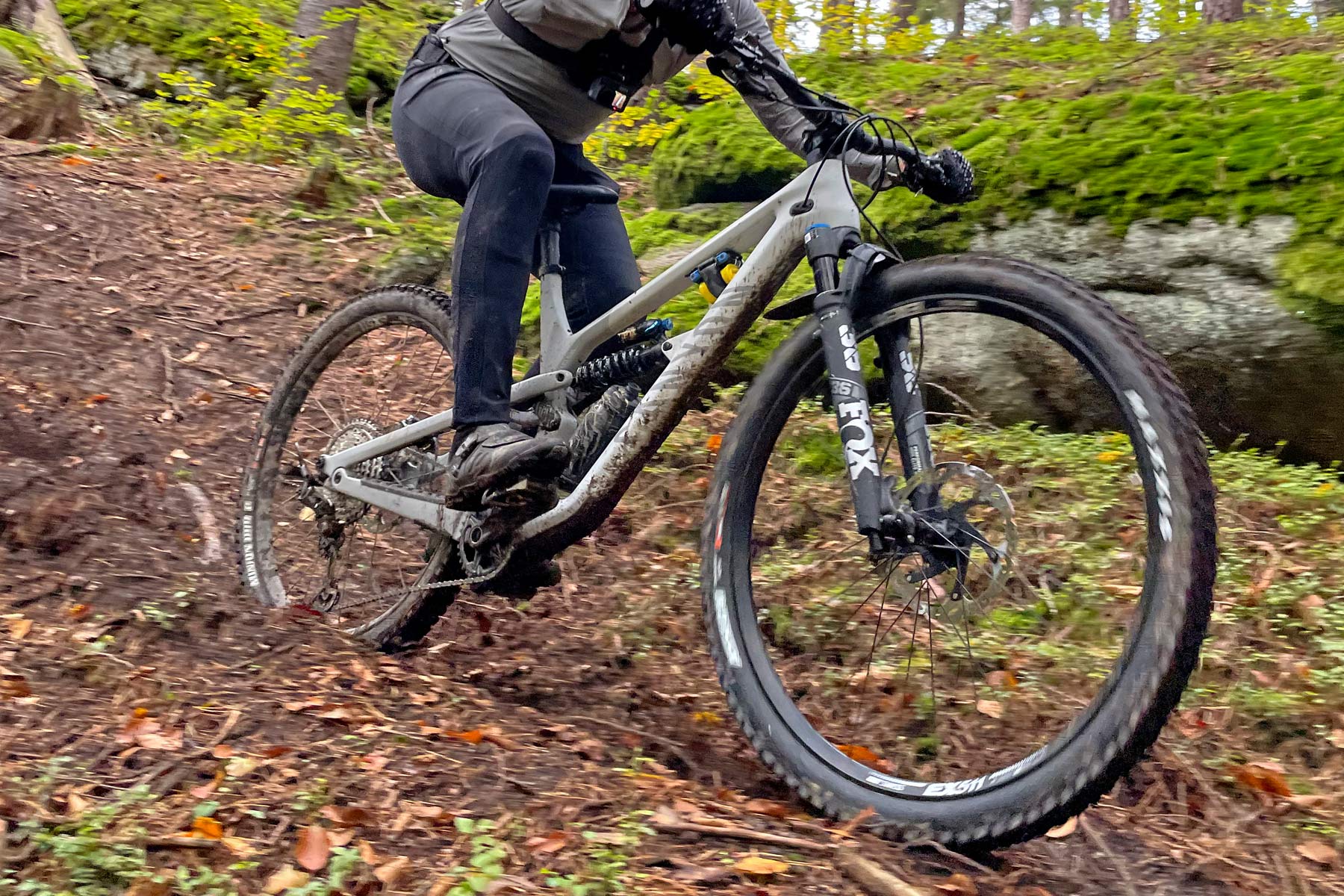 And thanks to some creative engineering, the 27.5 rear ends can be bolted up directly to the 29″ front ends to create Frankenstein’s monster… I mean a mullet bike, with the same unchanged geometry. 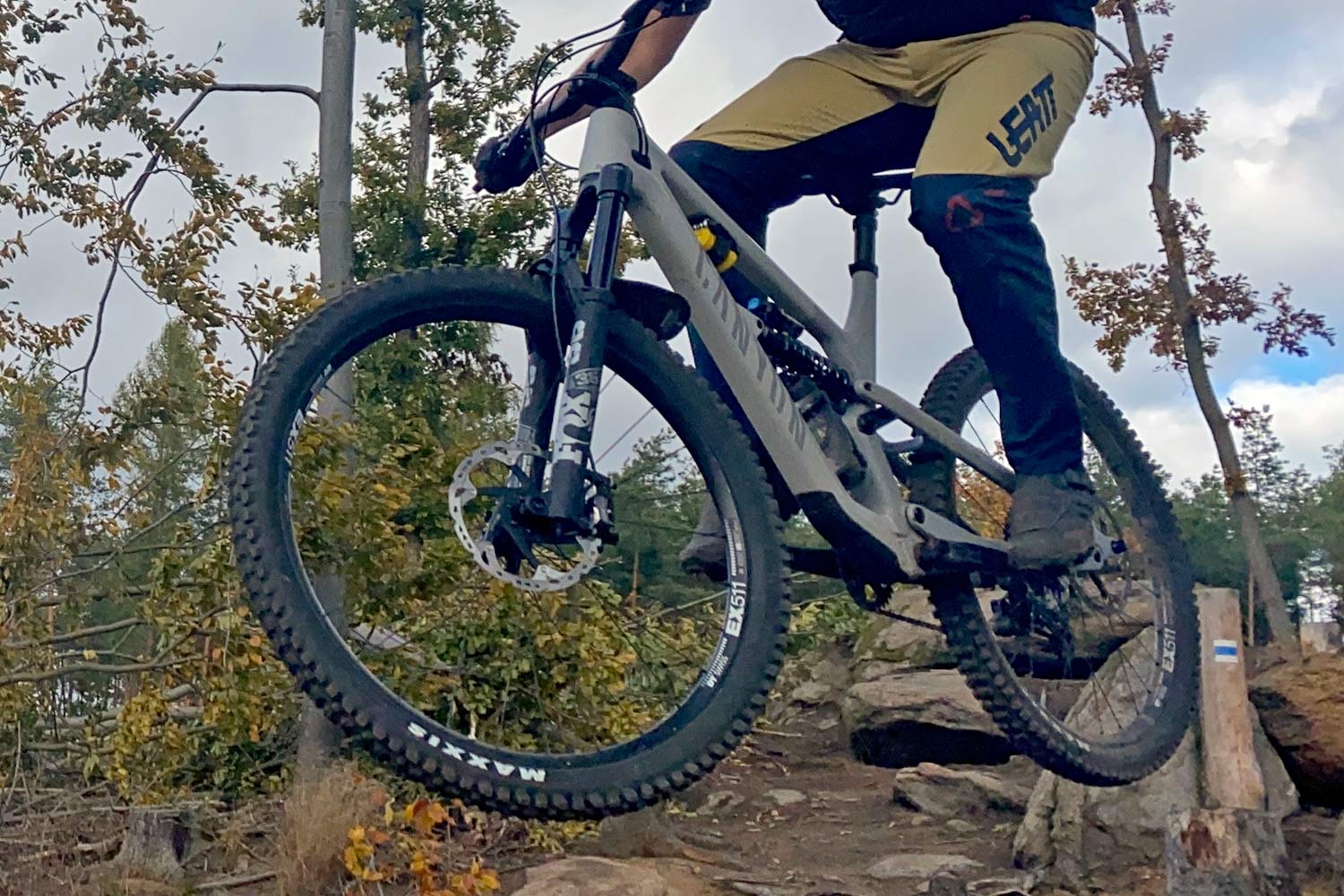 And now, Spectral Mullet riders can get the best of both worlds – all the snappy acceleration and high-speed rollover.

The rub is, Canyon has only released a single complete Spectral Mullet bike build. And despite the front & rear compatibility, they say they have no plans to make the new rear triangles available separately for Mullet conversions.

OK, but why? What’s the big deal with Mullets really? 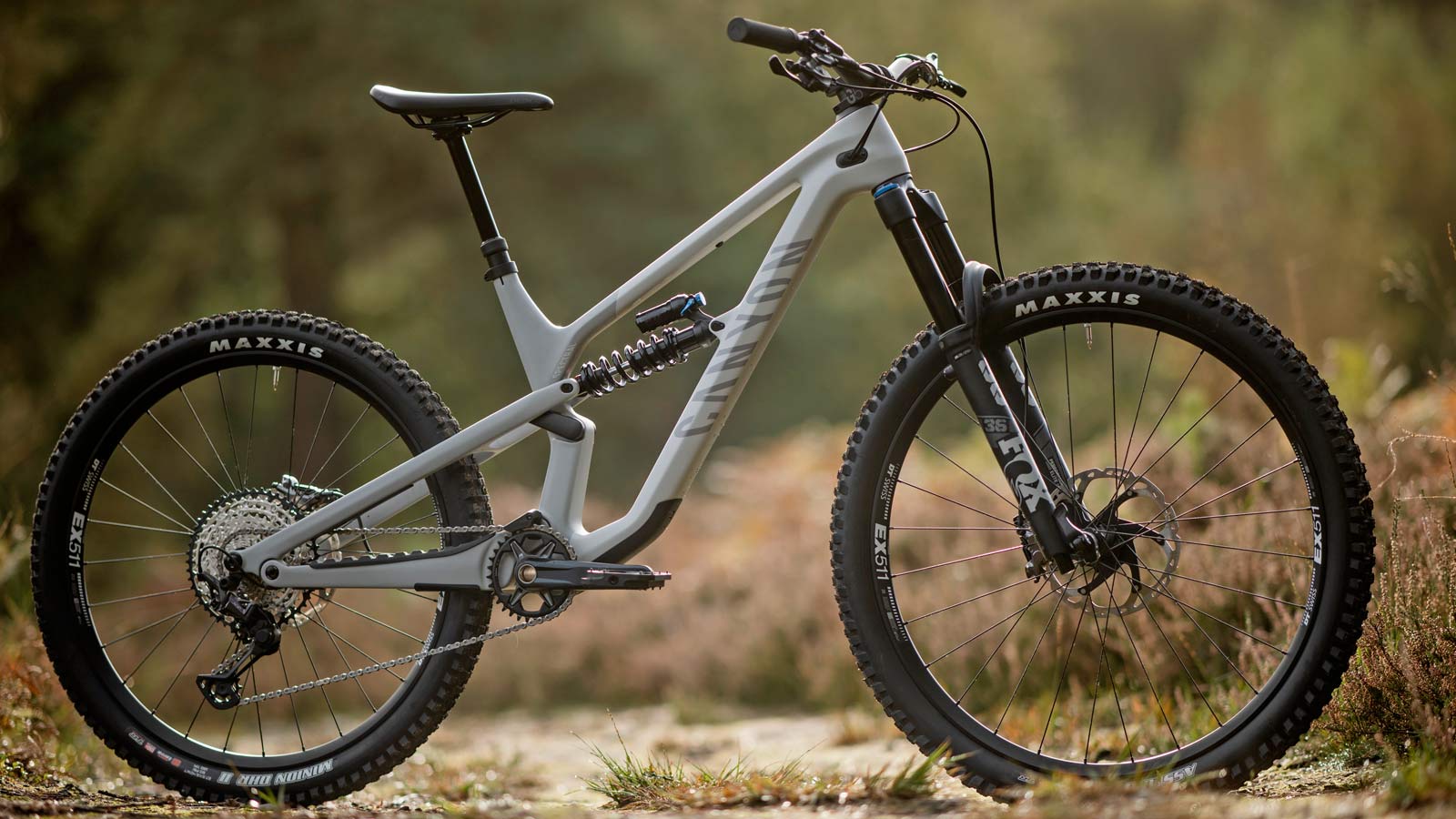 The concept is pretty simple in that the bigger front wheel rolls over obstacles better, and the smaller rear

And then there’s the mullet bike for those who want both.

The mullet shares the 29er front end so you get all of the Spectral 29 geometry, plus the 27.5 rear end to keep the bottom bracket height, wheelbase & angles unchanged.

All bikes even use the same shock rocker/linkages, with the same well-proven 150mm of ‘Triple Phase’ four-bar suspension. They take the best suspension kinematics that were updated in the Spectral CF 29 last winter with its progressive leverage ratio, increased bottom-out protection, and extra anti-squat for improved pedaling efficiency with minimal pedal kickback. 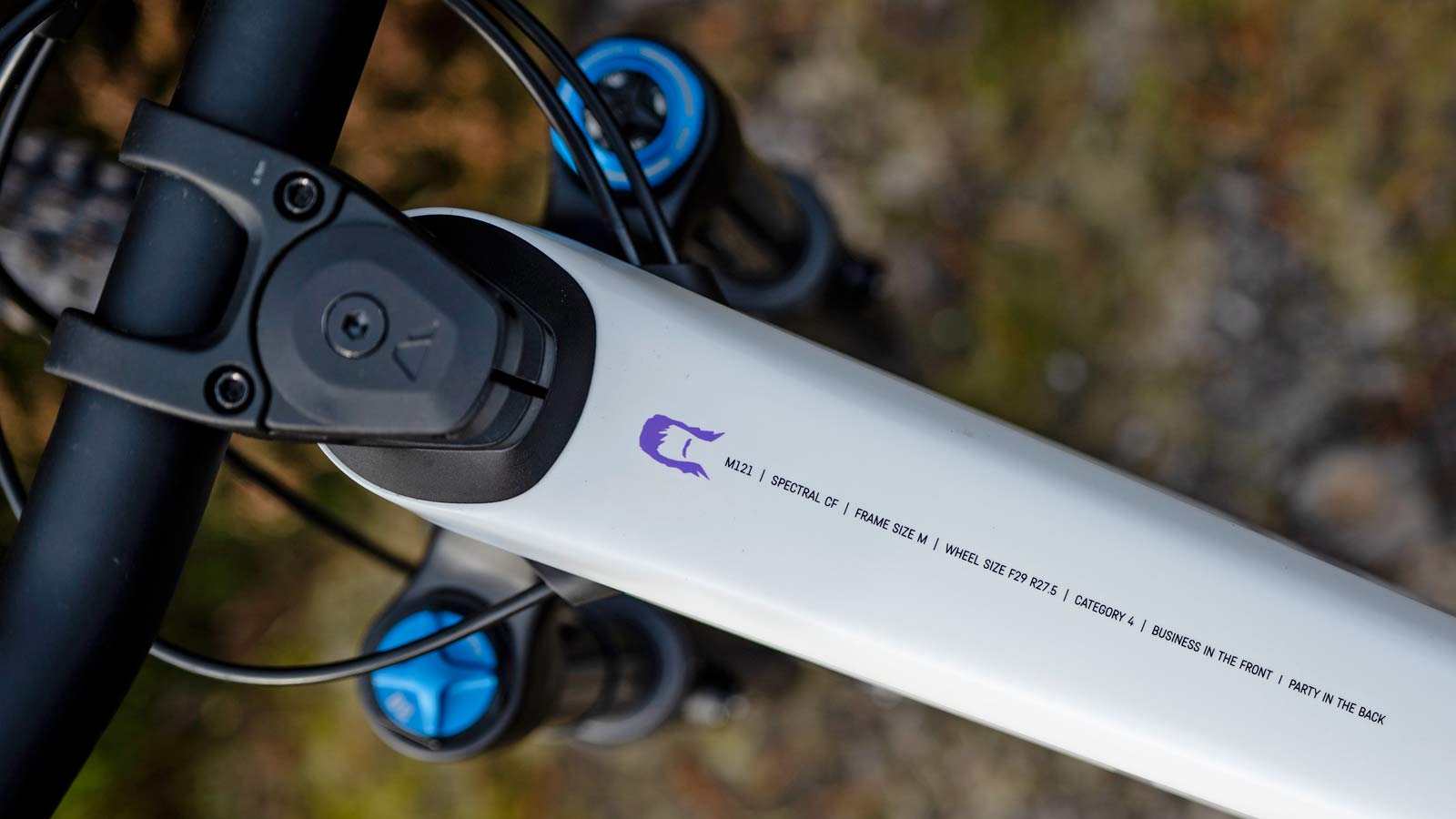 The name and its namesake itself sums it up. Mullet equals = Business in the Front, Party in the Back. Canyon even printed it right on the toptube.

It’s actually the most info we’ve seen written on the top of a Canyon bike. And besides the subtly descriptive Mullet haircut logo (which we appreciate), that text description is a bit unnecessary. One interesting detail though, Category 4 rating means this bike (and all other new Spectrals) is tested and certified to the same demanding technical standard as Canyon’s much bigger 170mm Strive enduro bikes. 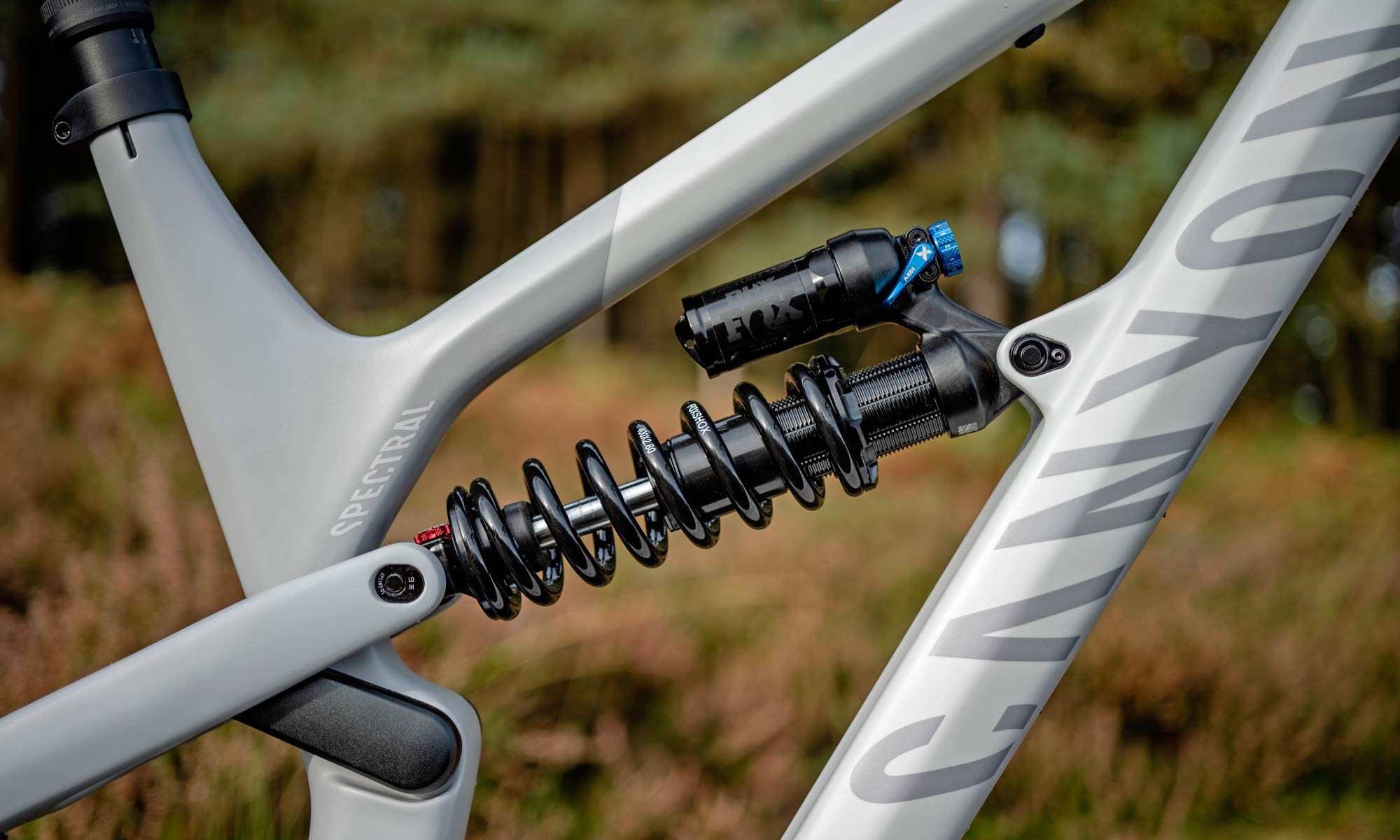 Remember, the Spectral started out as ‘just a trail bike’ with a max 140mm of travel in its previous incarnation…

Now, pairing 150mm of rear wheel travel to 160mm travel forks, the modern carbon Spectral CF 29 made a pretty significant jump when it was unveiled a year ago with 29″ wheels and both more progressive Triple-Phase suspension and much more capable geometry. Now, that same exact ride character is available on 27.5, 29, and now mixed wheel sizes, in carbon or aluminum framesets.

All of the carbon frames (the Mullet is only carbon, at least for the time being) also include a flip-chip at the lower shock mount to tweak your geometry by 0.5° and BB height by 8mm. 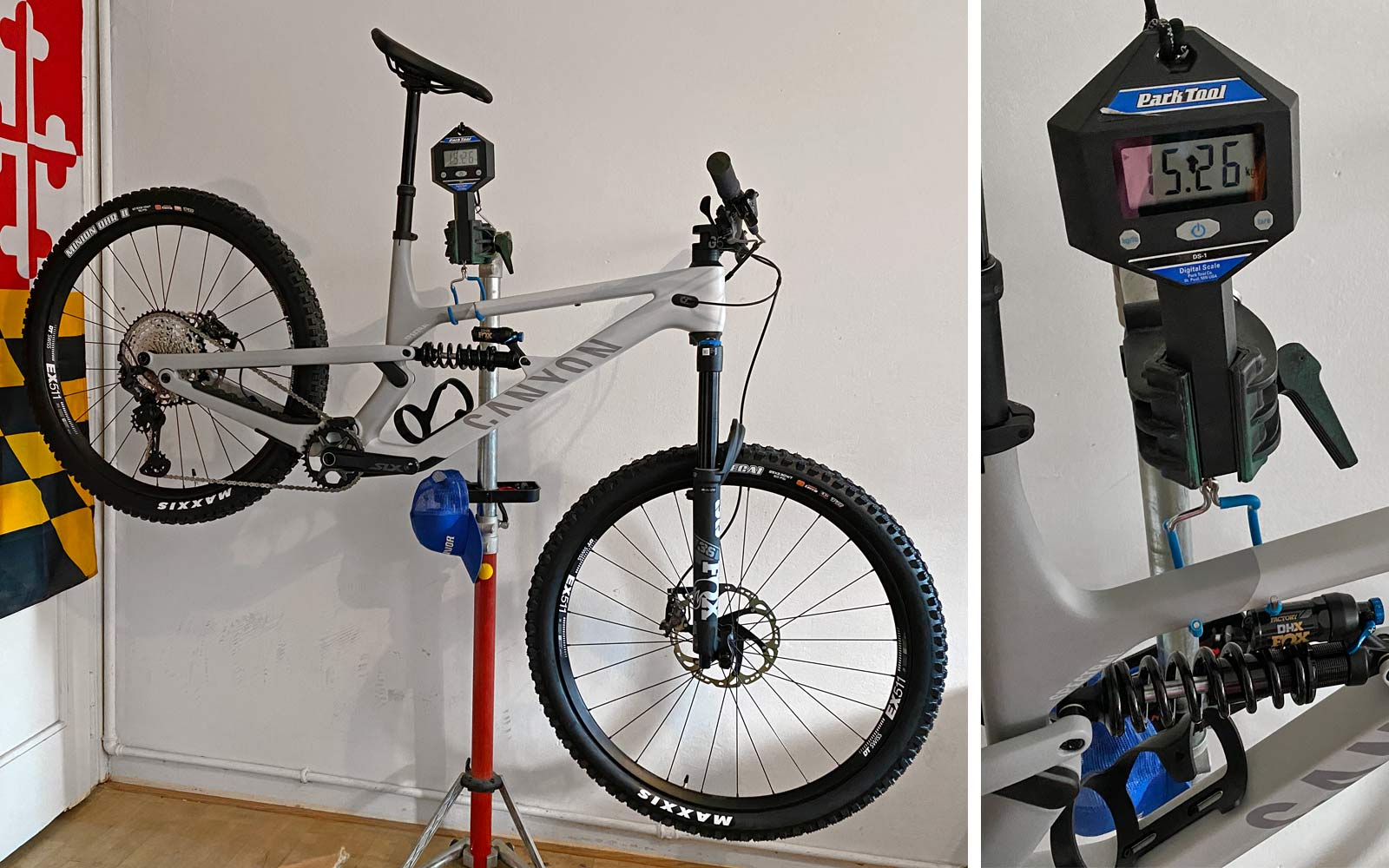 Canyon claims a complete bike weight of 15.16kg for the 4000€ Spectral Mullet CF 8 CLLCTV edition bike. Our size Large test bike tipped the scales just 100g heavier than that with pretty beefy stock inner tubes installed. The wheels did come pretaped for tubeless from DT Swiss, so all it took was to swap in some (shiny blue Muc-Off v2) tubeless valves and pink sealant to shed that hundred grams, while boosting anti-flat potential.

(Interestingly, this is exactly the same my Spectral CF 29 8 weighs including pedals, and the tool & spare tube under the top tube. Just a reminder that the ~800g claimed difference isn’t much more than 1 full water bottle.)

It’s always worth noting that, thanks to the pre-taped tubeless DT wheels & tubeless Maxxis tires, the swap from tubes to tubeless took less than 10 mins  – with just a single tire lever (to remove only one side of each tire), pressing & tightening the tubeless valves in by hand, adding sealant, then reinflating with a standard floor pump. 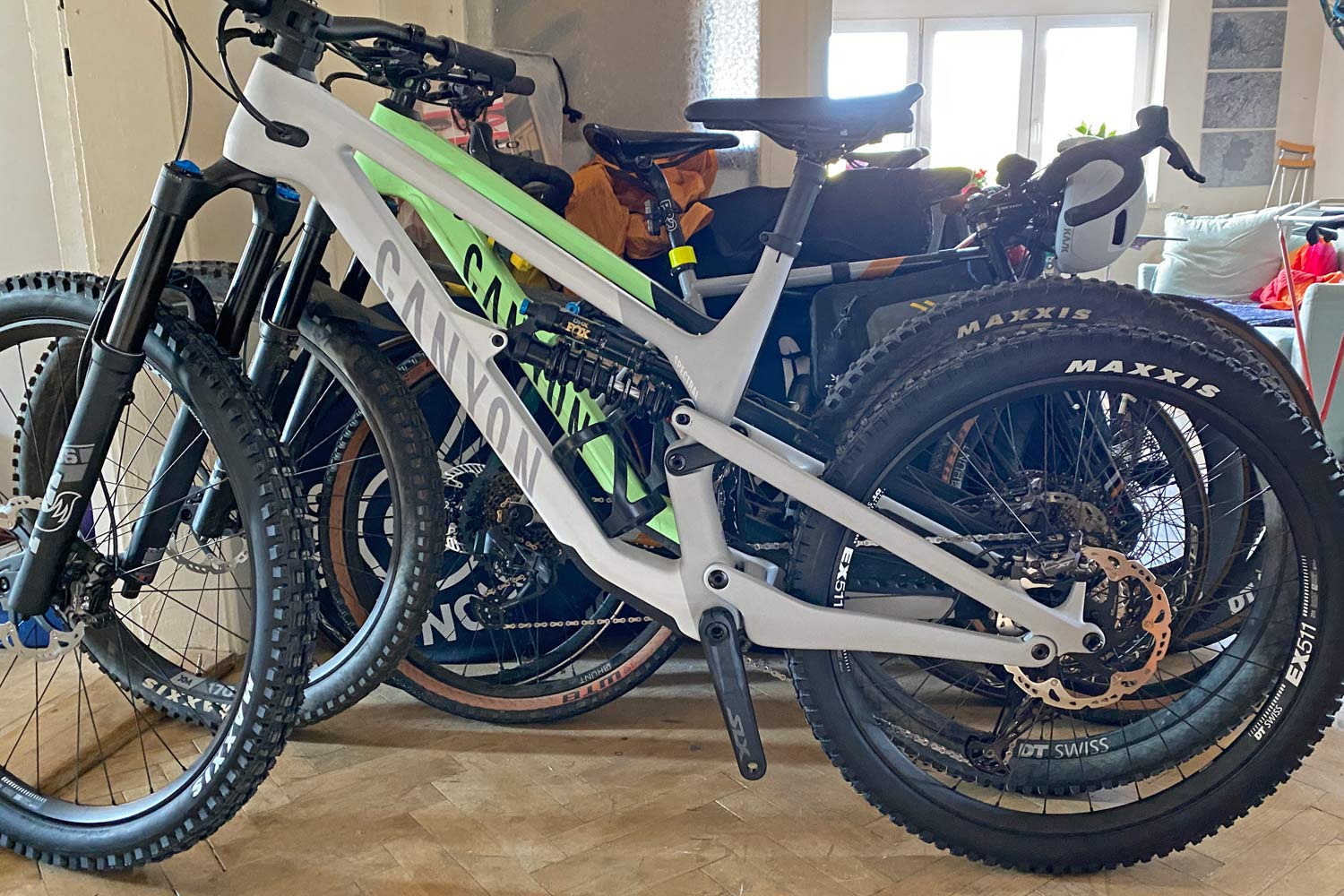 Suspension-wise, in a Large size for each, they are functionally identical – 160mm travel from the same Fox 36 Performance Elite fork, and 150mm from Fox shocks. The Mullet’s only CLLCTV build swaps in a new DHX Factory coil shock (with a platform semi-lockout) vs. the 29er’s Float X Performance Elite air shock for a more linear feel.

Geometry-wise, curiously, the two are identical. Even with the smaller rear wheel, the bottom bracket is at the same height, the chainstays are the same length, and the seat angle is the same. It’s simply a shorter distance to the back of the rear tire, while the wheelbase is unchanged. 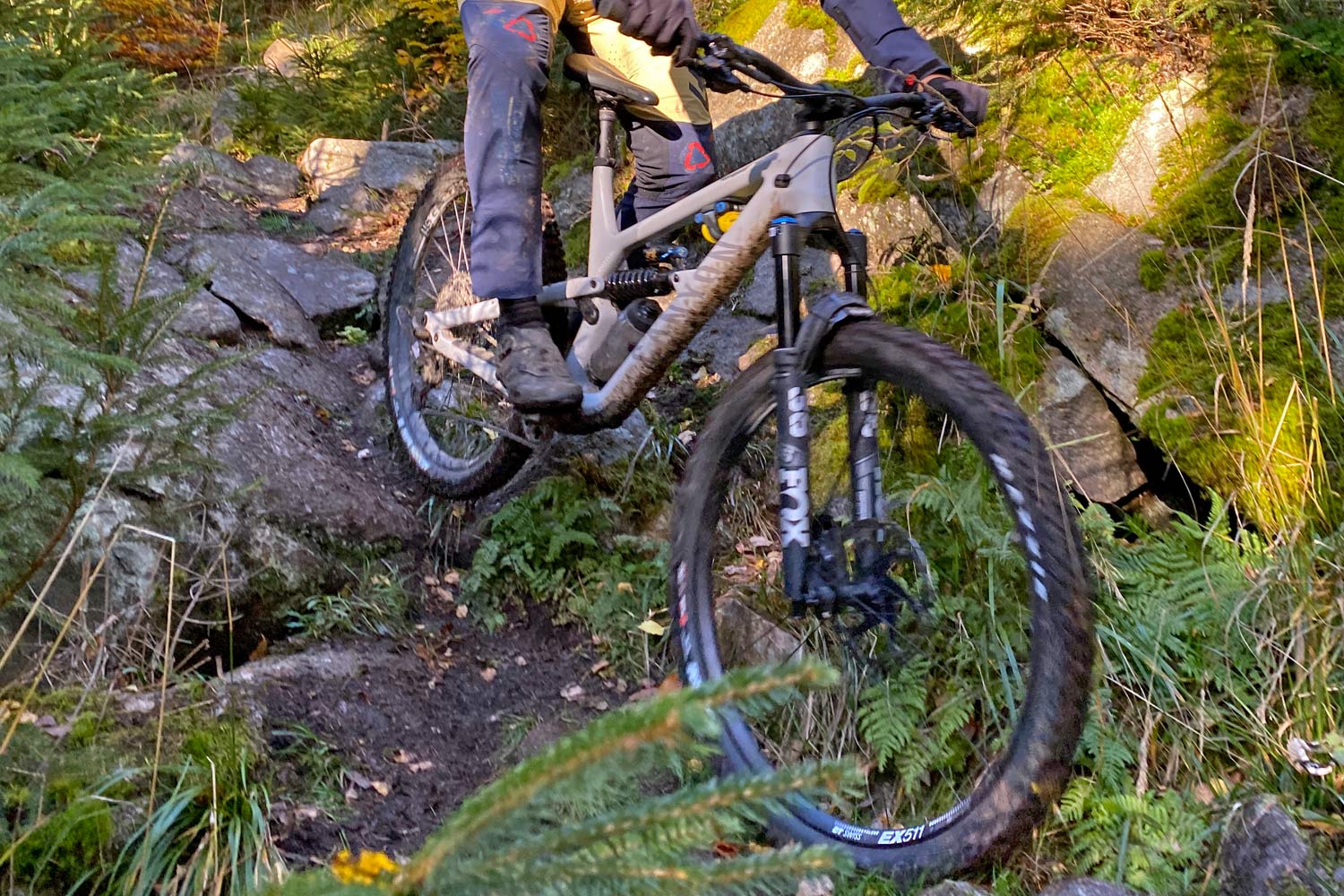 So, how does all of that vague similarity translate on the trail?

I’ll say that I rode the new Mullet build for a weekend over some incredibly steep, technical trails (shout out to the Izersky Collective who shuttled us on some close but new trails) with no information about what was different on this new Mullet bike, besides the mixed wheel size.

I immediately assumed that it has slacker angles and longer travel than the Spectral 29CF 8 I’ve been riding for half a year. 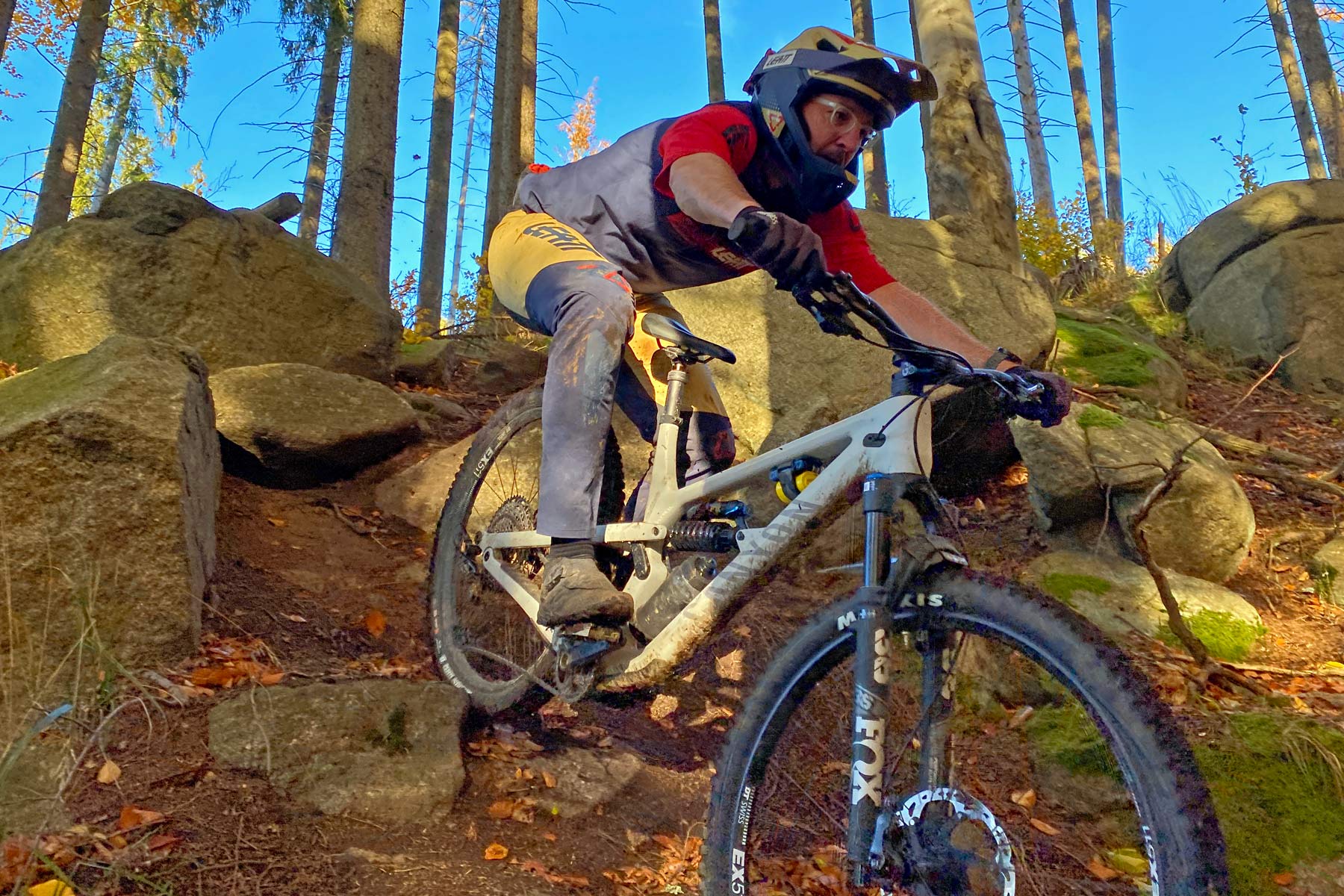 Of course, I was wrong. It’s exactly the same.

But the shift to the smaller rear wheel, really did make it easier to maneuver this bike… lean back, pop the front wheel off the ground a bit, and you can more easily redirect the front end – both at low & high speeds. 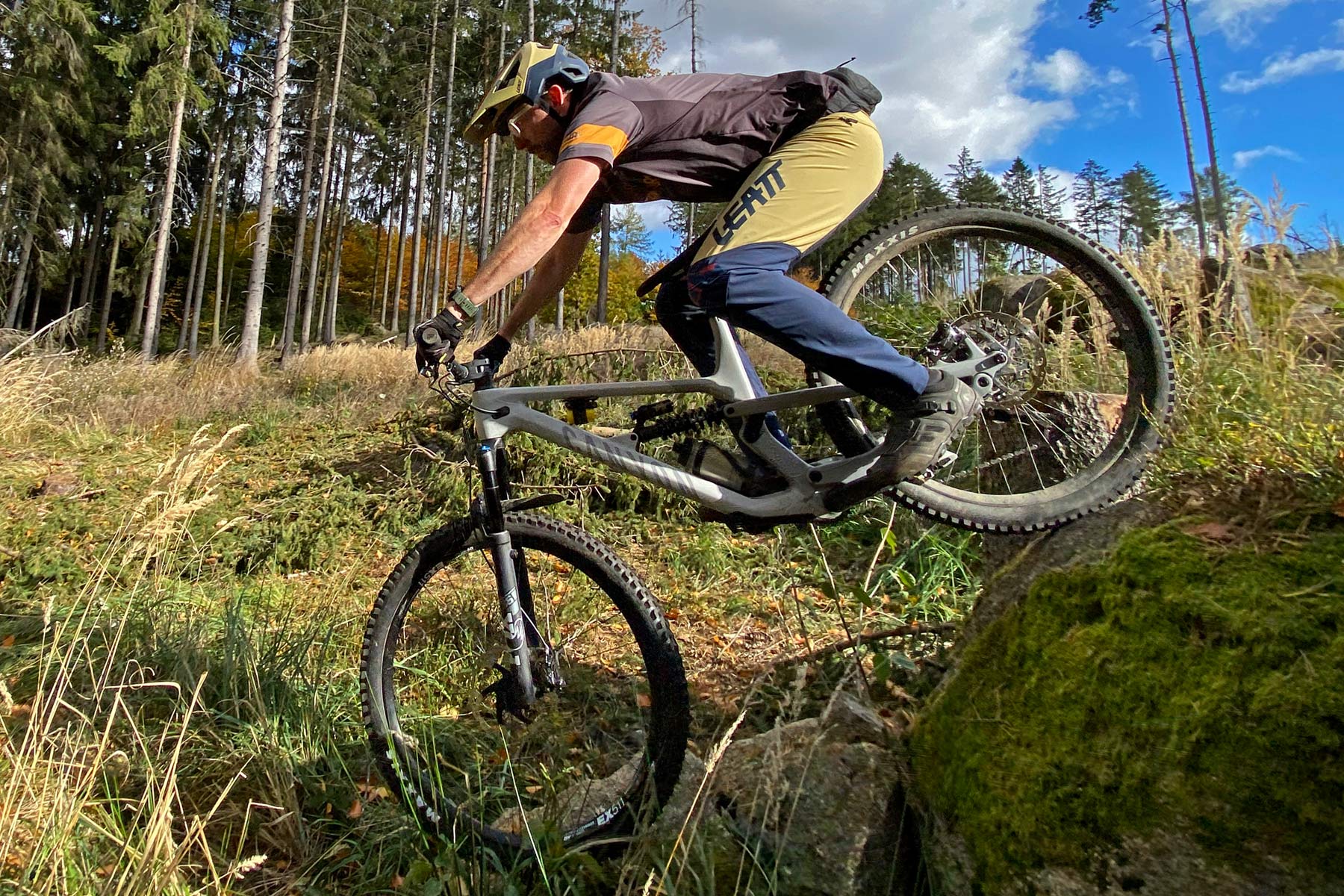 The result is that this Mullet build is truly more playful, and easier to move around.

With that said, I feel like the 29er was noticeably faster in the bikepark…  lift-served run after run. 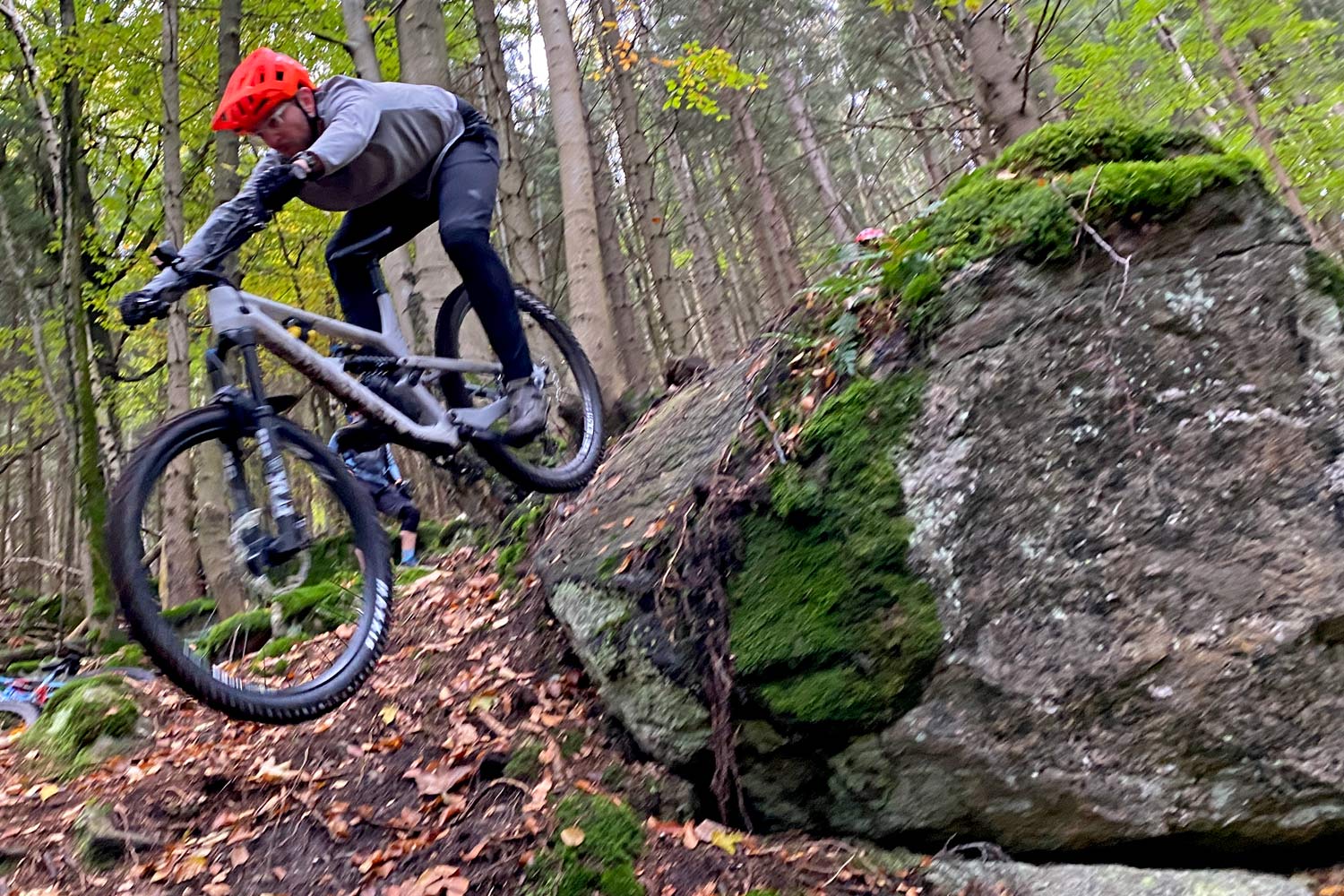 That said, the Mullet bike wants to manual. Everywhere, all the time.

Rock drops are its strong suit. 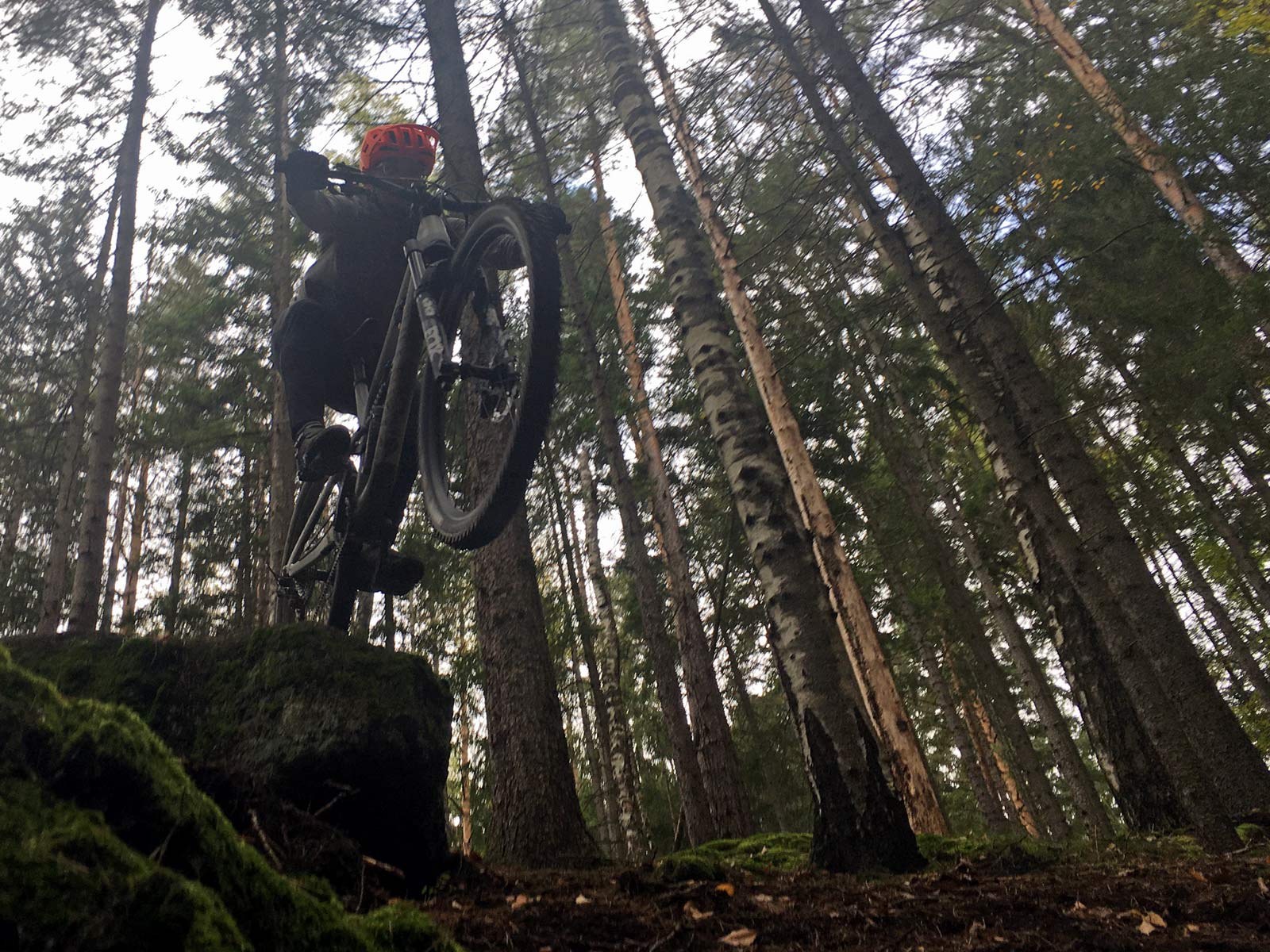 If you have North Shore style drops, the Spectral Mullet CF wants to hit every one of them. In reality, it will have you searching out rock-drops and step-downs to play on.

While the 29er Spectral feels like it wants to go fast, the mixed wheel-size Spectral Mullet feels more like a toy. It wants to kick off every hip, and maybe even get some air off of trail features you’d likely be pumping on any more average bike. 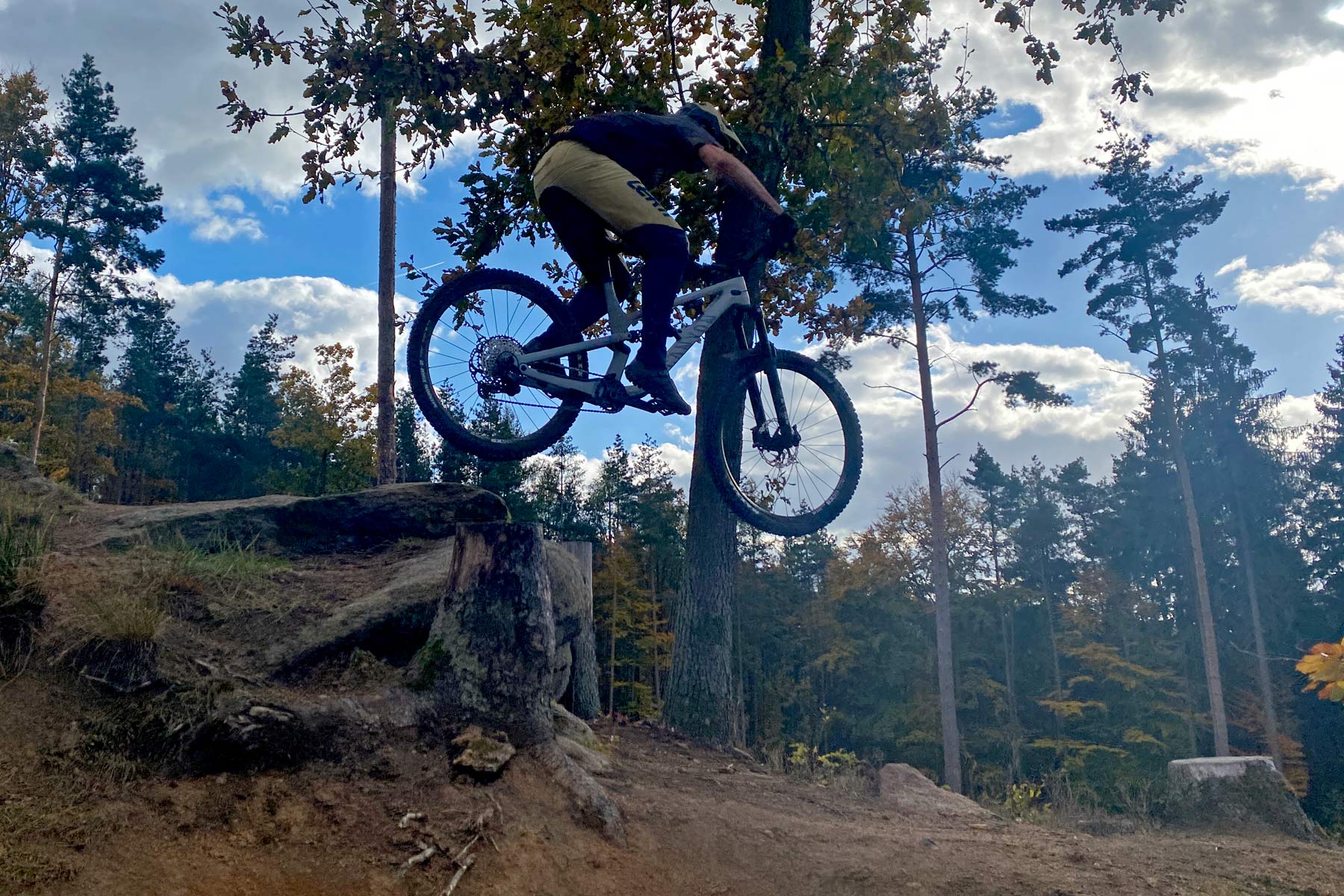 Looking back to that geometry adjustability, I’ve ridden both the Spectral CF 29 and the Spectral Mullet CF in both positions. But generally, I prefer the higher, steeper HI position for either bike, better suiting the more rocky tight technical terrain in Central Europe (CZ, PL, DE, CH, so far with these Spectrals). 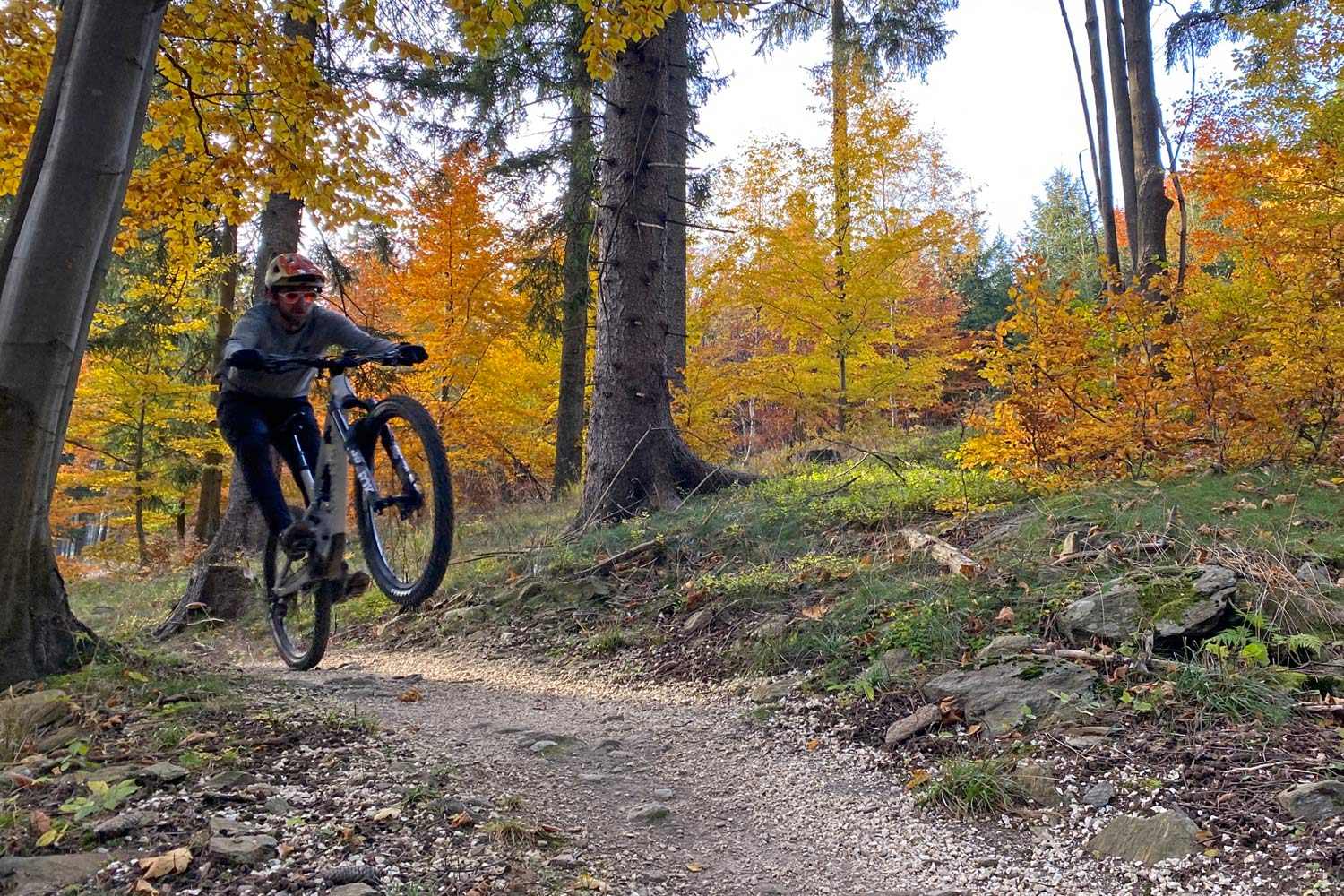 Mixed wheel sizes have been a debate (and an oddity) since the dawn of bigger wheels – remember 69ers? With this new Spectral, Canyon decided it was time to give the “business in the front, party in the back” concept a real try. My guess is that it will be widely accepted, and more mullets will be on the way… 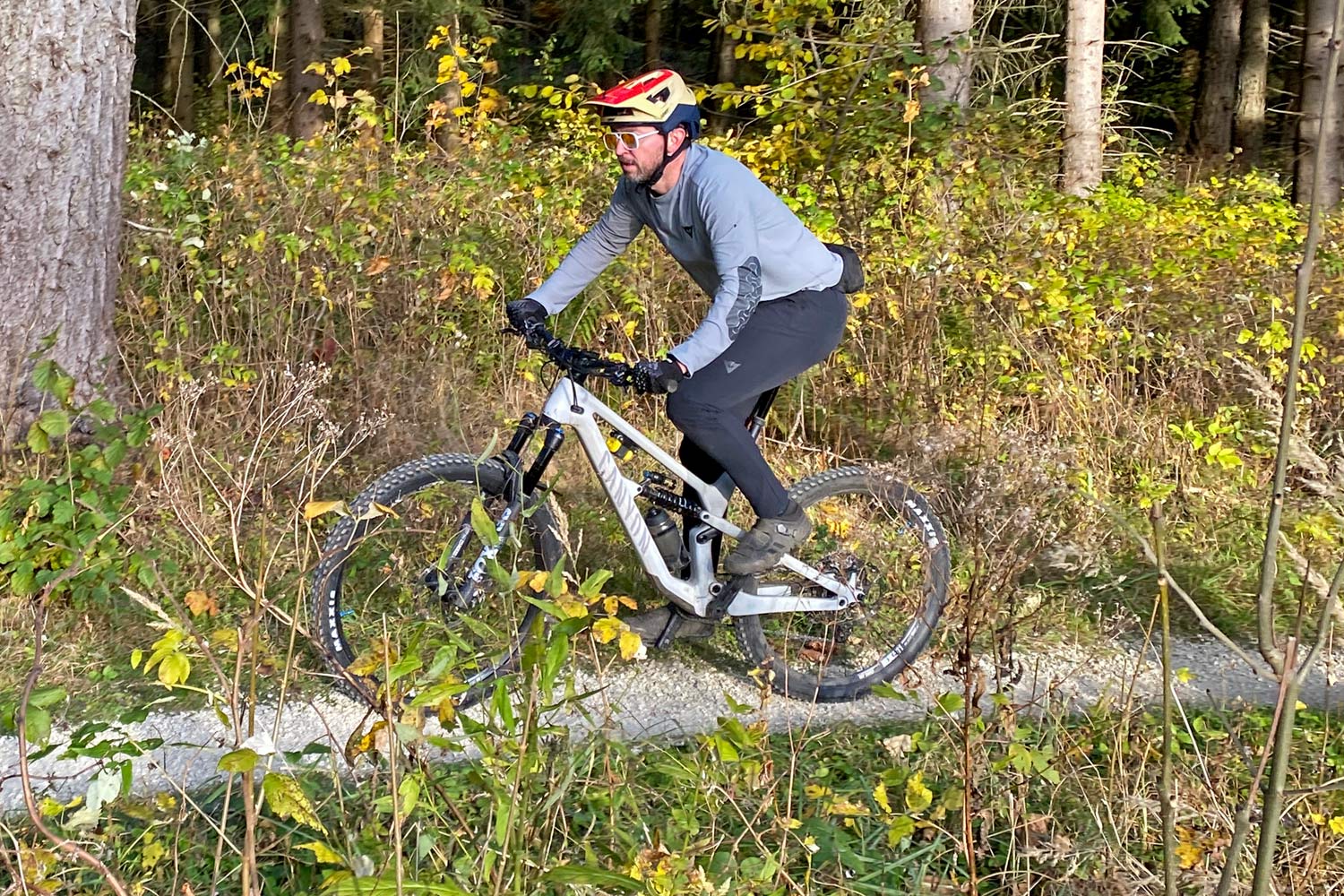 But it’s certainly not faster, and probably it’s a bit harder to control. Yet, the feeling of throwing a Mullet bike down some super steep, super technical trail brings a smile to my face – and probably will to yours, too.

Sure, setting up the Fox DHX coil shock was more complex than any air shock with a shock pump (my 80kg weight still required I swap out to a lighter 400# spring). But once I dialed it in with the proper spring rate & preload, I was pleasantly surprised by the descending plushness. And that Firm setting switch of the Fox shock has me climbing just as efficiently as with an air shock with a full lockout. 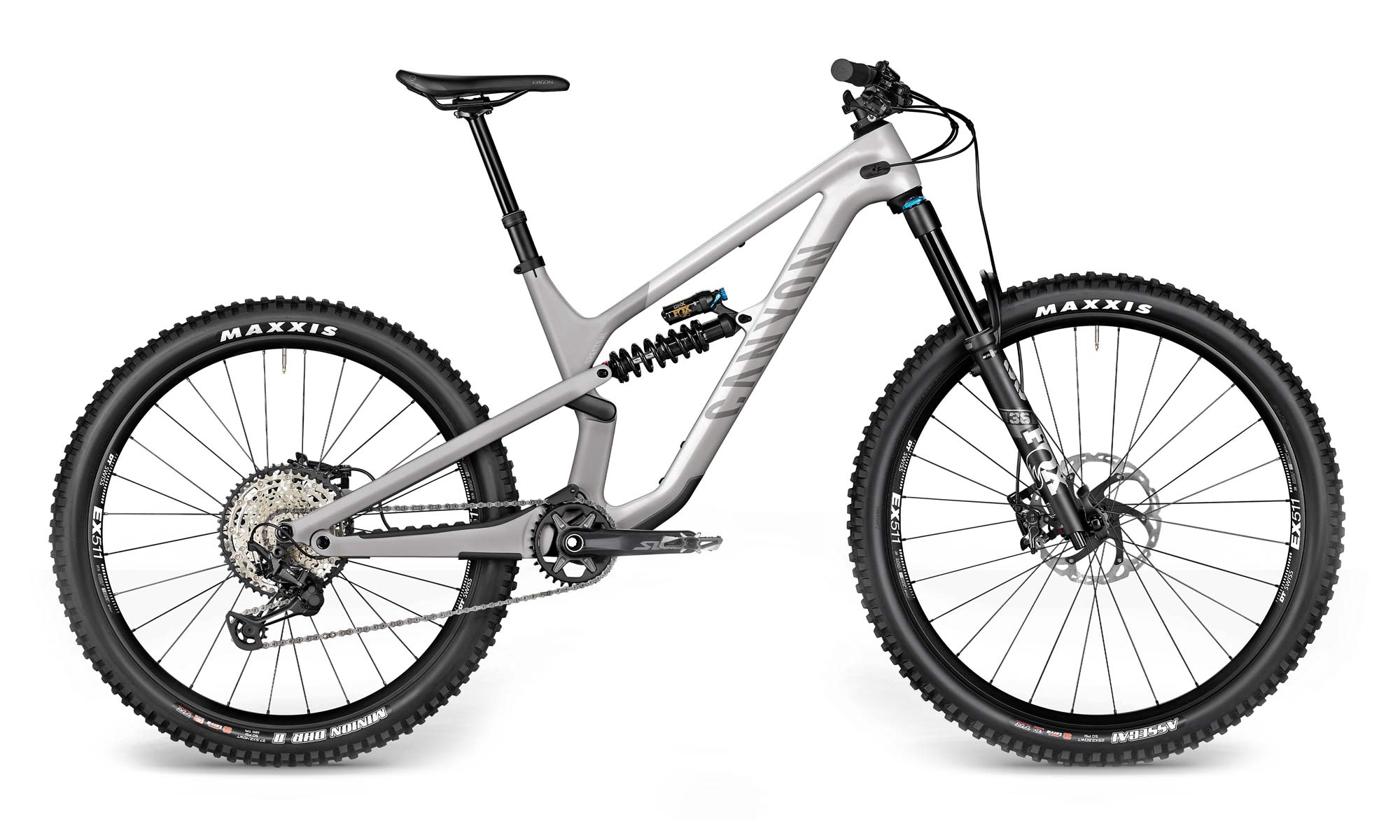 Only this single 4000€ carbon Spectral CF mullet model is being offered for the time being, a special CLLCTV edition with an excellent Fox Factory DHX coil shock and XT/SLX build, otherwise similar to the standard #8-level bikes. 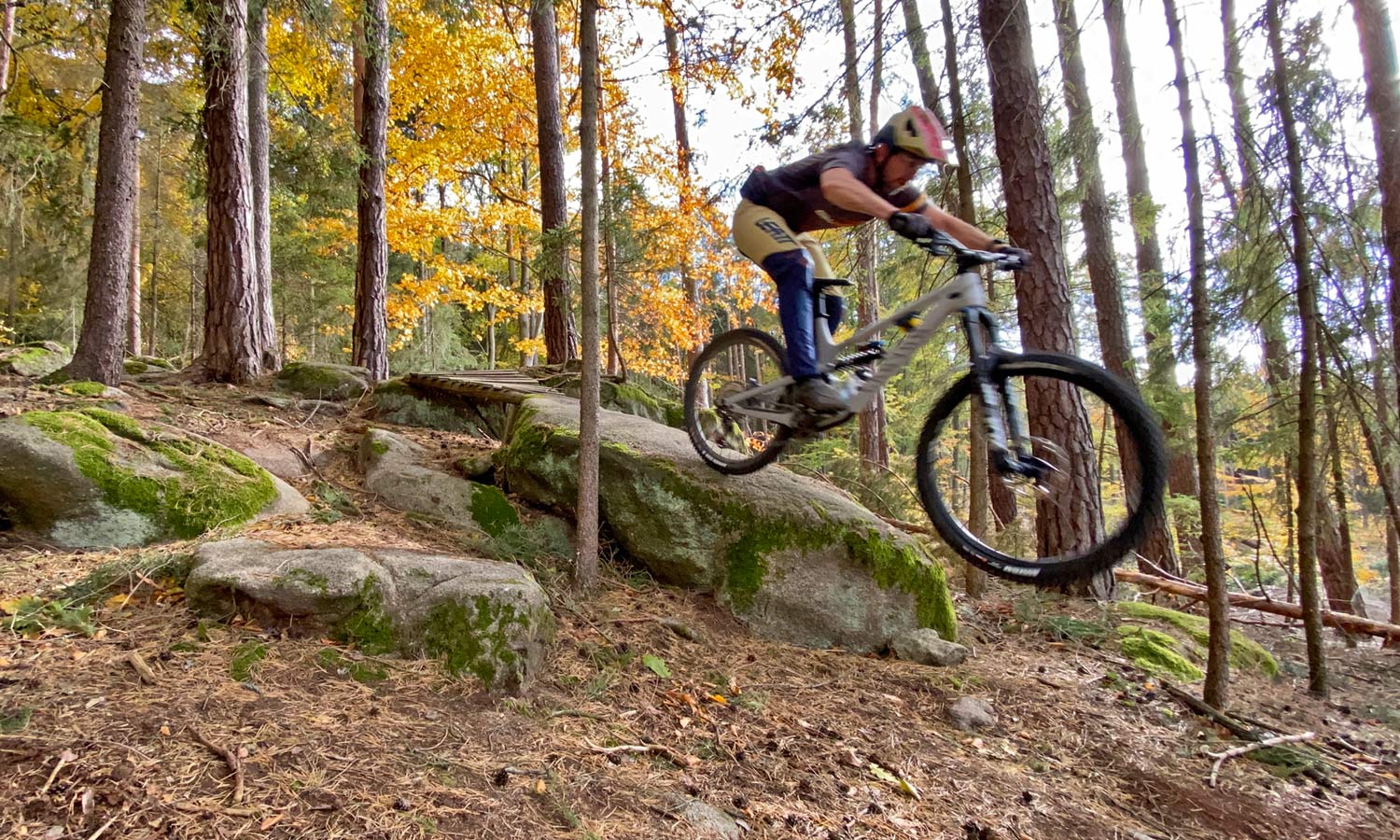 Time will tell if mixed wheel sizes gain more traction at consumer-direct Canyon? But I have to admit, that after riding the mullet for a few weeks, back-to-back with a Spectral CF 29, the Mullet build does deliver on that playful, rowdy ride. And it still climbs as well or even better than the a9er.

Integrated Road Bikes Perform Better, but at What Cost?