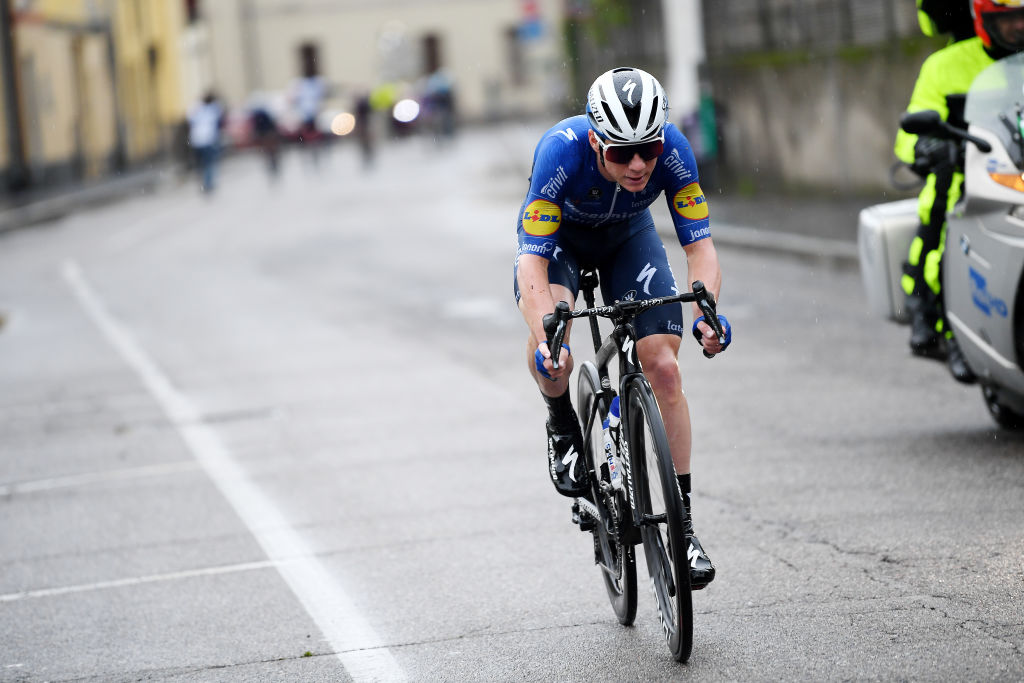 Remco Evenepoel underscored his status among the favourites for Il Lombardia with a remarkable solo victory beneath a deluge at the Coppa Bernocchi on Monday. The Deceuninck-QuickStep rider went clear of the decisive six-man break with 31km remaining to win by almost two minutes from Alessandro Covi (UAE Team Emirates).

The win was Evenepoel’s eighth of a season that also saw him place second at the European Championships road race and third in the World Championships time trial. His final outing of 2021 will come at Il Lombardia on Saturday.

It will be only Evenepoel’s second appearance in a Monument Classic, and he will look to excise the memories of his debut in the race in August of 2020, when his season was ended by a heavy crash on the descent of the Muro di Sormano.

Evenepoel fractured his pelvis in the crash and he did not return to competitive action until May of this year, when he made his Grand Tour debut at the Giro d’Italia.

“I want to wipe out the bad memory from last year. That crash took a lot of things away from me, but now is the time to look ahead and take my revenge,” Evenepoel said, according to La Gazzetta dello Sport. “Together with my teammate [Julian] Alaphilippe, I hope to provide a spectacle. And I’m certain that we will.”

On Monday, Evenepoel became the first Belgian to win the Coppa Bernocchi since Rik Van Looy in 1958. He was part of a six-man move that forged clear with 60km remaining and he then proceeded to push clear alone to take an emphatic victory.

“Like always, I followed my instinct. We wanted to make the race difficult from the start and thanks also to the help of [Fausto] Masnada, we managed that,” said Evenepoel.

“At a certain point, I saw that my breakaway companions seemed tired, maybe also because of the cold, so I attacked. I did it before the last flat section that might have helped the bunch come back. To tell the truth, I was surprised to be there with so few breakaway companions, I expected a reaction from the peloton.”

Evenepoel is not in action at Tre Valli Varesine on Tuesday, nor will he race in Wednesday’s Milano-Torino, where Alaphilippe will line out for the first time since he retained his world title in such resounding fashion in Leuven. Both Evenepoel and Alaphilippe will lead the line for Deceuninck-QuickStep at Il Lombardia, which will be the final races of the season for both men.

Evenepoel said that he has not yet given any thought to his racing programme for 2022, when he will undoubtedly seek to test himself once again in a three-week race after his Giro debut was cut short by injury in 2021.

“No, the only thing I know is that after the finish in Bergamo, I’ll go home and I’ll take a nice holiday for myself,” he said.

Danny MacAskill’s latest is a stunt with a cause