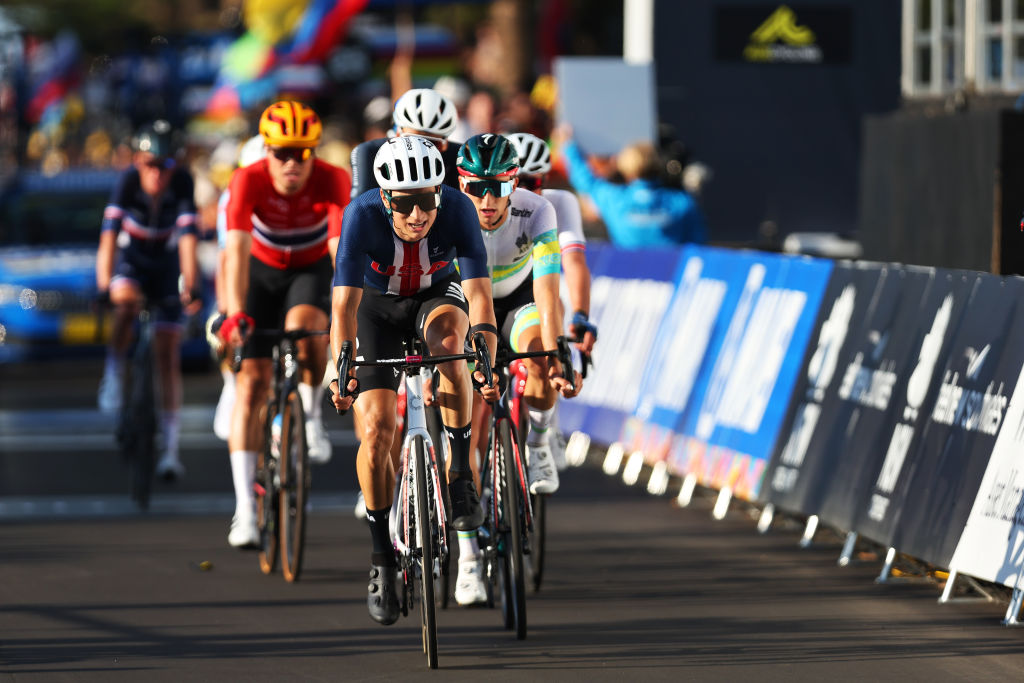 Powless was in on the action in the last crucial third of the race, for a while forming part of the 26-rider group that subsequently saw Evenepoel take a lone flight for victory.

Powless, fifth in last year’s UCI Road World Championships equivalent event, but who had recently expressed doubts about a repeat ride in this year’s race, said that he could maybe have finished “a few places higher with better legs”.

But as proved to be the case for the rest of the field, Powless also said that Evenepoel – like himself a former Clásica San Sebastian winner –  was simply unmatchable on Sunday in Australia.

“I don’t think that even on one of my best days I could have been able to follow Remco when he dropped [closest pursuer Alexey] Lutsenko on that climb,” Powless said categorically. “He was on another level today.”

Even if the remainder of the Worlds riders were powerless in the face of Evenepoel, Powless said overall the race had been both “really fun and dynamic” and he was happy to have been a part of it. Not to mention, he got into some promising-looking moves during the race at the right time.

Powless only started missing moves, “when Remco was solo. But in the end they all got caught anyway. So I was happy with my performance.”

As the race reached its climax, but prior to Evenepoel’s attack, Powless even felt good enough to challenge briefly from a break. But he said that a change in the race dynamic behind proved fatal to his chances.

“I thought I was going to be gone, I thought I’d gotten away from anybody else, I couldn’t understand why that group started working together,” he said.

“But that was because five riders came from behind and Italy started pulling for Alberto [Bettiol] and Belgium for Wout [van Aert] so it made sense that they caught me. But for a minute I couldn’t understand why they were chasing because right before that everybody was looking at each other and nobody wanted to work.

“In the end, though, it all made sense and I was happy to be there sprinting in the group that was going for the medals.”

If the bunch’s attitude to his attack briefly took him by surprise, Powless said that on the other hand, he had been able to predict the way the Worlds played out in general. As he said, “I think the race opened up one or two more laps than I thought it would, but I was kind of guessing that was what was going to happen.”

As Powless saw it one clearly positive note for the USA was the performance of gravel and mountain bike racer Keegan Swenson, who was brought in to take part after various US WorldTour riders could not make it.

Swenson finished the race in 73rd place despite his almost total lack of experience at road racing at that level, and Powless praised his fellow North American for “doing really well.

“He was pretty attentive on [early climb] Mount Keira, always in the right position. I didn’t see too much of him at the very end but that’s how it goes when groups are all over the road:”

As for himself, he said, “I was just happy to use my energy as smart as I could have and I got the most out of myself for the USA.”

Cyclocross: The ‘Big Three’ face off Sunday for first time this season