Philippa York: Ineos Grenadiers are running out of options at the Tour de France 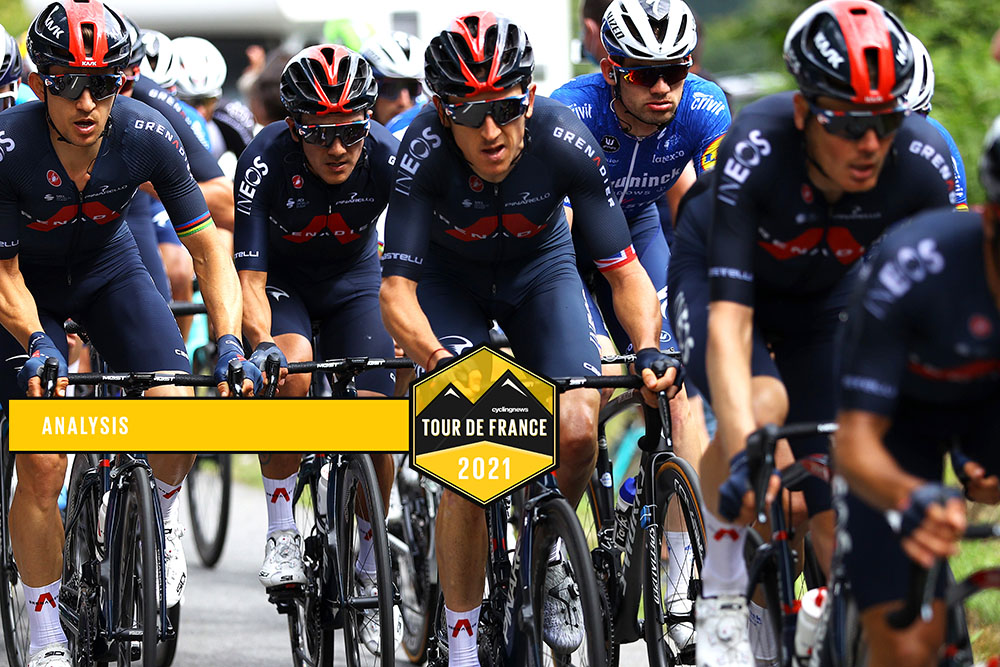 That Ineos Grenadiers came to the 2021 Tour de France with four protected riders in the shape of Geraint Thomas, Richard Carapaz, Tao Geoghegan Hart and Richie Porte was a contentious move on their part and realistically a decision that saved team supremo Dave Brailsford from having to reveal their true intentions.

Call it a mix of gamesmanship and politics in the mental sparring that the big teams employ when answering such questions during the run-up to the start of racing. Or not answering them, in this case.

The statement intended not so much to mislead as to not inform you fully of what they see happening out on the road which is why it’s often accompanied by the well-used phrase, that the race will decide. It’s a bit of a cop-out that no one really takes seriously but it leaves just enough doubt until circumstances make it clear who is where and who looks best placed to become the one and only leader.

Well that other old adage of you can’t win the Tour on the first day but you could lose it has certainly been apparent on the route between Brest and Landerneau with the two massive crashes having major consequences for so many riders and teams who could possibly consider themselves alternatives to the two biggest favourites, Tadej Pogačar (UAE Team Emirates) and  Primož Roglič (Jumbo-Visma) .

The first few days of the Tour are always desperately nervous but nobody could have foreseen the carnage that occurred and the changes to the dynamics of the race that result because of said carnage.

For Ineos the delays that Porte and Geoghegan suffered have cleared up any confusion or debate over the leadership question. They are now at the service of numbers 21 and 22, Thomas and Carapaz. No ifs or buts which may appear cruel but time lost at this level isn’t given back freely, not when you see Roglič up front sprinting for a few seconds. Jumbo-Visma aren’t going to let either of the Ineos fallen return to the GC battle in a tactical play.

For Geoghegan-Hart it’s a brutal introduction to how stressful and merciless the Tour de France can be and, though he came back from a poor opening day at the Giro last year to win, I fear he’s going to find that the season’s most important rendezvous rarely has fairytale endings.

He can console himself with the knowledge that he still has an important role to play but now any GC pressures are gone he will have responsibilities elsewhere. Protection of and not protected by.

Richie Porte was already saying he returned to the team to be in a supporting position and he knows, given his previous mishaps and experiences, how to process any disappointment and move on. Because that’s what Ineos have to do given that out of those four potential leaders now only two remain.

Judging the hierarchy between Thomas and Carapaz remains trickier but the looming 30 kilometre time trial on stage five will only add considerably more seconds to the small deficit that the Ecuadorian lost on the Côte de la Fosse aux Loups. Even at a reasonable 3 secs/km loss the 2019 Giro winner will be more than a minute and a half behind Thomas and then it’s hard to argue the case for him to be given a free hand in the mountains. He might be the only help that Thomas has when the two Slovenians really test each other.

It’s only the first weekend and already the options that Ineos had hoped for are out the window slightly. The aggressive racing that they had planned on implementing now looks like a less attractive option because if it’s an echelon scenario then Thomas might be OK although the damage it’ll do to Carapaz could be fatal. Same if they choose the hilly option, then the roles are reversed and Carapaz would be fine but the constant changes in pace could hurt the Welshman.

It seems much more likely that we’ll see a return to the previous modus operandi of the high tempo setting and hoping that it can work in their favour. They have the resources for that style of riding as both Geoghegan Hart and Porte can ride a whole mountain pass at a high enough speed to keep everything under control and then they’re relying on the strength of Thomas to remain with Roglič and Pogačar in the final kilometres.

If he can’t quite do that then there’s the option that Carapaz can aid him to limit any gaps that develop but the reverse scenario where Carapaz drops the Slovenians and Thomas is the support seems much less likely. Not after the demonstrations the Jumbo and UAE leaders showed last year. And remember, Geraint Thomas still has to get to the mountains without falling off himself, a feat which all too often has eluded him. Disaster has struck Ineos on the first day so don’t be surprised to see them return to what they have done best before. Ride on the front when they have to, protect the leader and control the race to their strongest rider’s characteristics.

With the removal of two of their four GC options on the very first day, any tactical thoughts of out manoeuvring Roglič and Pogačar have become seriously restricted. That’s not to say they’re over, far from it, however in a direct fight the latter two will fancy their chances against the British squad’s remaining leaders even more.

Emma Norsgaard: The psychological demands of elite success and the need for U23 women’s category at Worlds

The Best Chamois Creams of 2021: Enjoy Your Ride, Friction-Free