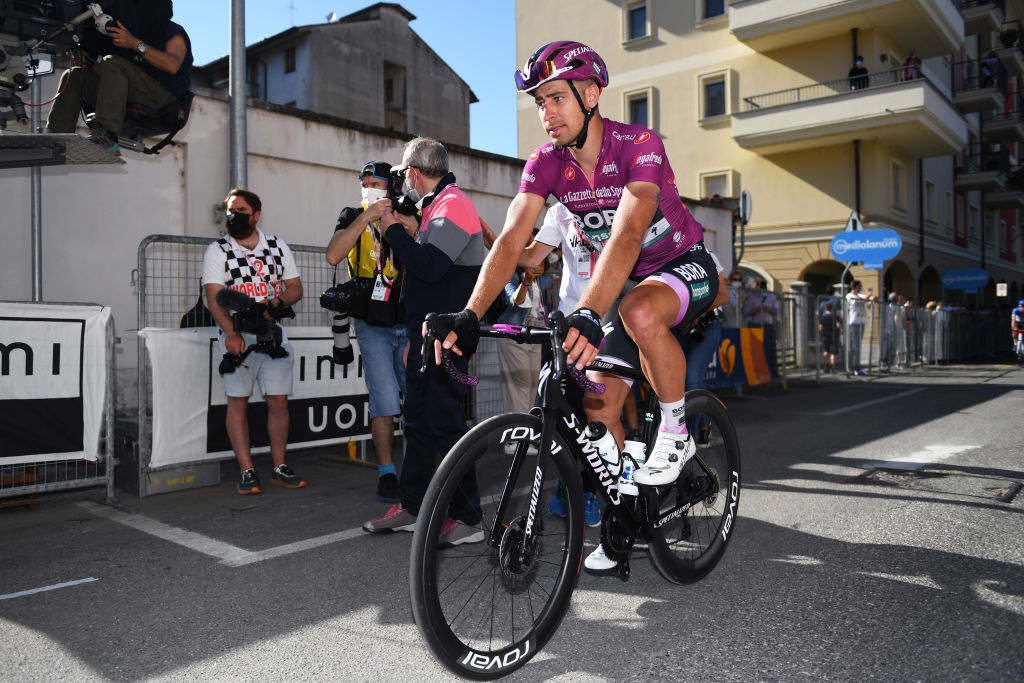 Peter Sagan (Bora-Hansgrohe) was docked 50 UCI points and fined 1000 CHF for “Intimidation, improper conduct against other riders” according to the Giro d’Italia stage 18 race jury communiqué.

Sagan did not lose any points toward his tenuous lead in the ciclamino jersey competition, where he leads by 22 points over Davide Cimolai (Israel Start-Up Nation) and a further three points over Fernando Gaviria (UAE Team Emirates).

It is unknown what incident led to the penalty, but Sagan and teammate Daniel Oss kept a commanding presence at the head of the peloton in the lengthy fight to establish a breakaway on the longest stage of the race.

It took almost 60 kilometres of racing for the peloton to finally let the 23-rider breakaway go. With 179km to race, Sagan came to the front of the peloton with Oss and Ineos Grenadiers’ Filippo Ganna to finally bring a stop to the attacks.

“Today was an important stage and the key was not to lose points for the ciclamino jersey. We kept under control the sprinters that were close in the points classification and held on to the ciclamino. On Friday and Saturday, we have two hard mountain stages,” Sagan said in a press release.

“This was the last decisive stage for the ciclamino jersey, so it was our main objective of the day. Our strategy was to either let a breakaway group go all the way to the finish or, if other teams were also interested in that, work to keep the escapees under a shorter leash and be ready to fight in the finale,” Valach said.

“The squad was strong today and we were ready for all possible scenarios, including the possibility to battle for the stage win. Every one of the guys worked hard in the initial part of the stage and a big group went away.”

Eventually, the breakaway gained an unassailable 23:30 margin on the main peloton and swept up all of the points, with stage winner Alberto Bettiol (EF Education-Nippo) taking 50 points at the finish in Stradella.

“That was to our advantage since no sprinter would get any points in the intermediate sprint. We weren’t worried about the escapees building too much of an advantage since all sprinters were in the bunch. Peter was protected, stayed safe until the finish line, and kept the points jersey. We are happy with this outcome ahead of the two mountain stages,” Valach concluded.