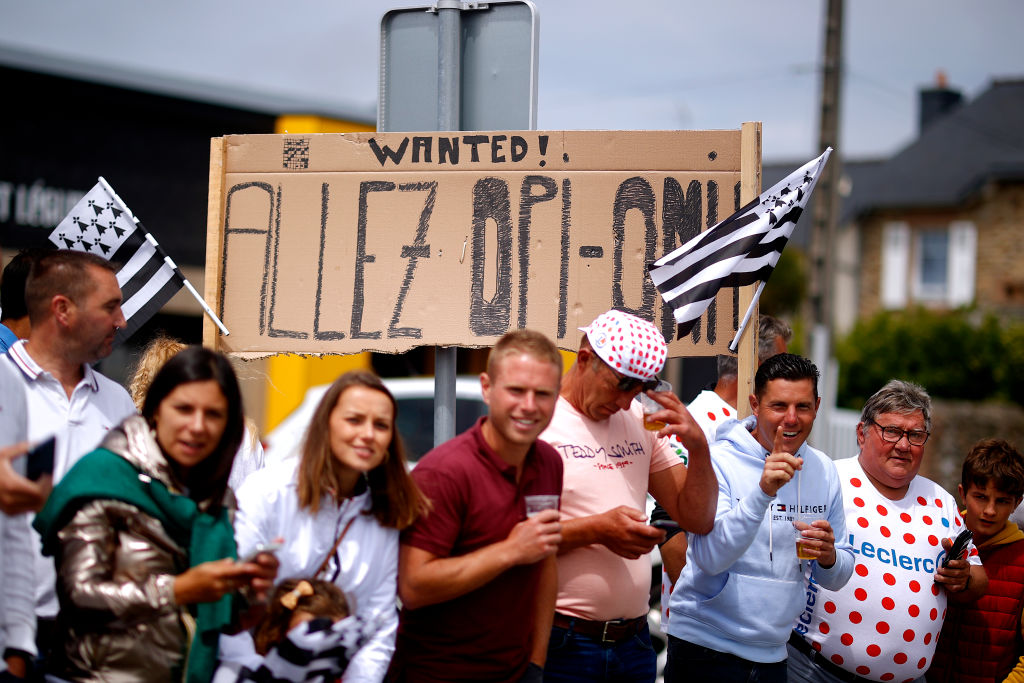 The spectator responsible for the mass crash on the opening day of the Tour de France, is facing a four-month suspended prison sentence, with a verdict to be delivered in December.

The woman, who sparked the pile-up when she leant into the road brandishing a sign for her grandparents, appeared in court in Brest on Thursday, where her lawyer said she was “fragile” and “going through hell”.

The case involved criminal charges for endangering people and causing work-limiting injuries, as well as a civil suit from the Association of Professional Cyclists (CPA), which had filed a ‘symbolic’ compensation claim of €1.

There was no verdict on Thursday but the prosecution has requested a prison sentence of four months, which would be suspended so she would provisionally not spend any time behind bars.

The case was adjourned and the court will reconvene on December 9, when the judge will deliver a final sentence.

The woman, who had already been described as ‘vulnerable’ by the public prosecutor after her arrest, turned up to court amid a gaggle of media, according to French news agency reports.

Her barrister, Julien Bradmetz, who had appealed in vain for the case to be heard behind closed doors, described her as “a fragile personality” and told the court that “this fragility has been multiplied to the point that my client is now going through hell”.

The prosecuting lawyer acknowledged that she “recognised the dangerous nature of her actions” and had “expressed regret”.

The spectator, whose sign read ‘Allez Opi-Omi’ in a nod to her grandparents, collided with Tony Martin and caused another 50 or so riders to hit the deck. Cyril Lemoine, Jasha Sütterlin, and Ignatas Konovalovas were all immediately forced to abandon, while Marc Soler was later diagnosed with two broken arms.

The Tour de France organisers initially stated their intention to pursue damages but later decided not to proceed, with race director Christian Prudhomme calling for ‘calm’ amid a situation that had reached ‘crazy proportions’. “She did something daft, but she’s no terrorist,” Prudhomme said, according to France 24.

A few days after the incident, the woman came forward to the police and was charged with ‘endangering others through a manifestly deliberate violation of a duty of prudence or safety’ and, as a consequence, ‘involuntarily causing injuries that lead to an inability to work for up to three months’.

As well as those criminal charges, which were heard on Thursday, she could have to cough up €1 to the CPA after the rider’s union decided to press civil charges in what it described as a ‘symbolic’ lawsuit to raise awareness for rider safety.