My Indoor Cycling Setup 2022: I Upgraded To A Wahoo KICKR


In this post I’ll give a quick tour of my indoor training set up: my pain cave, some recent upgrades, and how one of those upgrades lost me ALL of the training gains and more from my recent Zwift training programme.

Stick around to the end to find out what happened.

Oh, and I know that some of the cycling arsehole-arati find the term pain cave triggering….

I’ll also try some terms of my own, starting with watt grotto and sweaty cleft.

A Quick Summary of My Cycling Prowess

Live in the Midlands, U.K., near the Peak District. Strava tells me I ride 4,000km a year. I’m better climbing than on the flat. 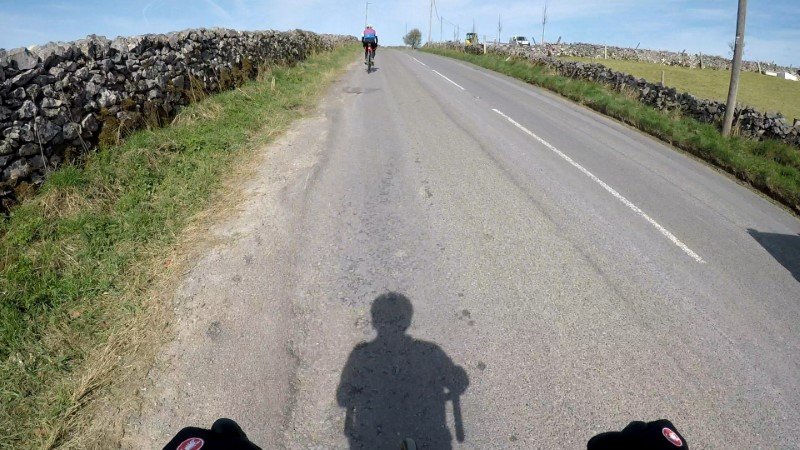 I like cycling – a lot – but I’m by no means a machine. Any more than 5-6 hours in the hills, at a steady pace, is about my max. Beyond that: wobbly mess.

And. This. Is My Indoor Training Setup

Welcome. This is where the magic happens. By day, this is where I undertake the home-based element of my real job. By night, or the weekend, a window into the cycling metaverse. 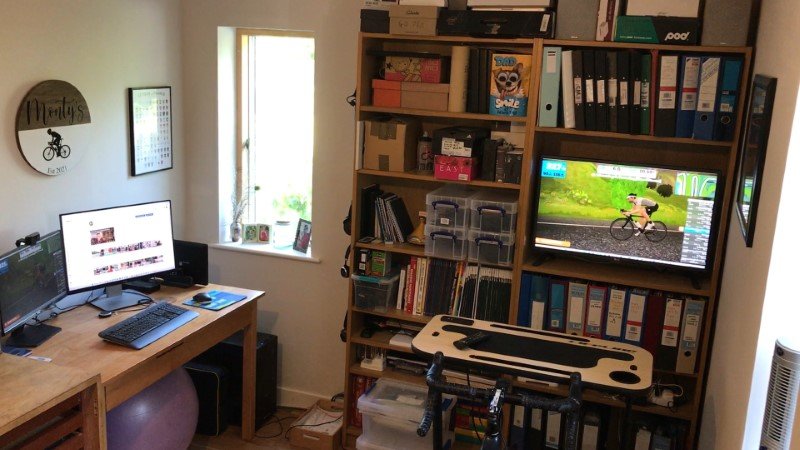 And yes, I sit on a birthing ball.

Having an indoor cycling setup that is actually indoors, as opposed to in our damp, dilapidated garage, is a novel development in 2022. And one I’ve been very pleased with.

My Indoor Cycling App Of Choice

I’ll start with software bit of my setup first because I don’t envisage that changing for the foreseeable.

I’ve decided to base my indoor cycling, training, and increasingly my life, around Zwift. 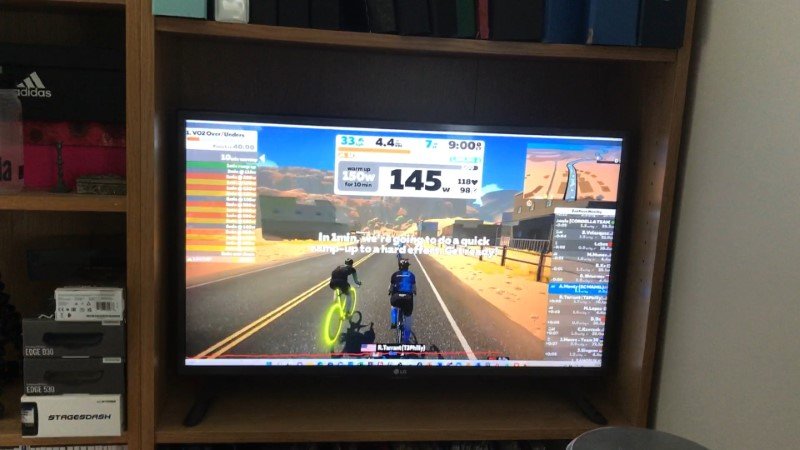 I’ve not fully downed the Zwift Kool Aid but I’ve had a few slurps. I’ll save my ‘Why Zwift’ thesis for a future video.

I currently run Zwift on my desktop PC, old school, and connect it to my devices and sensors via an ANT+ dongle plugged into a USB port. 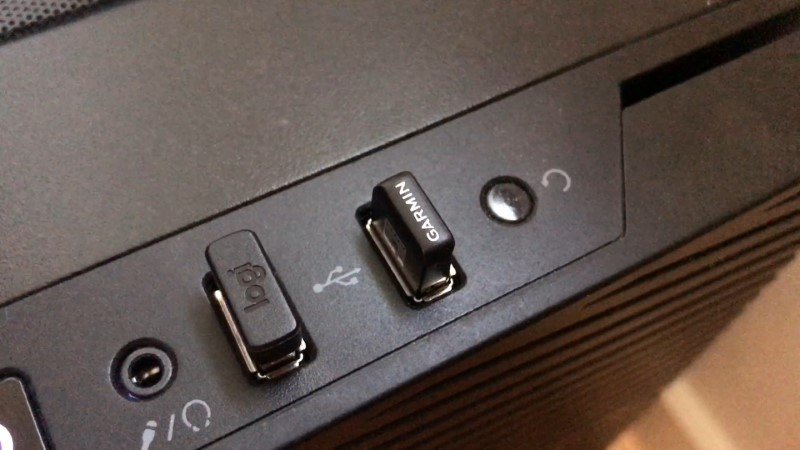 I’ve got Zwift set up automatically to sync workouts, rides, whatever we call them, to Strava. Also to TrainingPeaks but that’s largely for show.

So that’s the software brain, what about the engine, aside from the immense respiratory whoopee cushions in here?

My MVS, minimum viable setup, started with a wheel-on dumb trainer, the Elite Crono Fluid, that I’ve owned for many years. 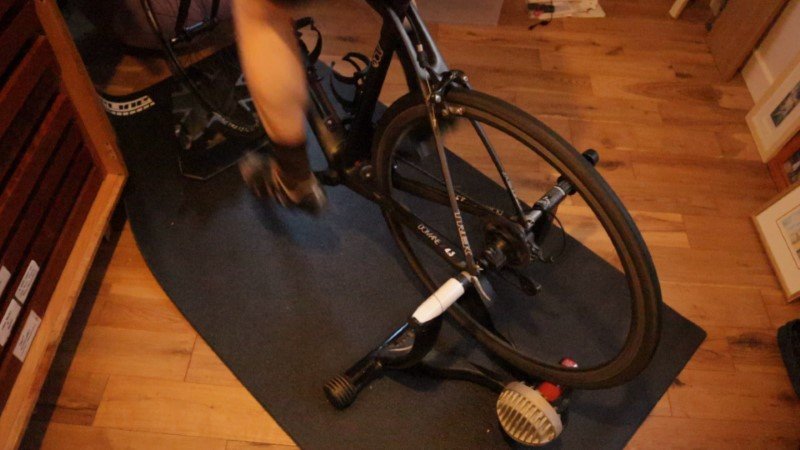 It doesn’t measure and broadcast power. It can’t be controlled. In fact it doesn’t do anything except offer resistance to the rear wheel rested up on it. Like it’s owner, it’s not a smart trainer.

However, the Elite still works with Zwift because the latter can estimate power by using the output from my speed sensor and discombobulate it against a speed power curve that they have stored for this trainer.

And yes, this is a Stages power meter crank. No, it doesn’t work. And, no I don’t want to talk about it. 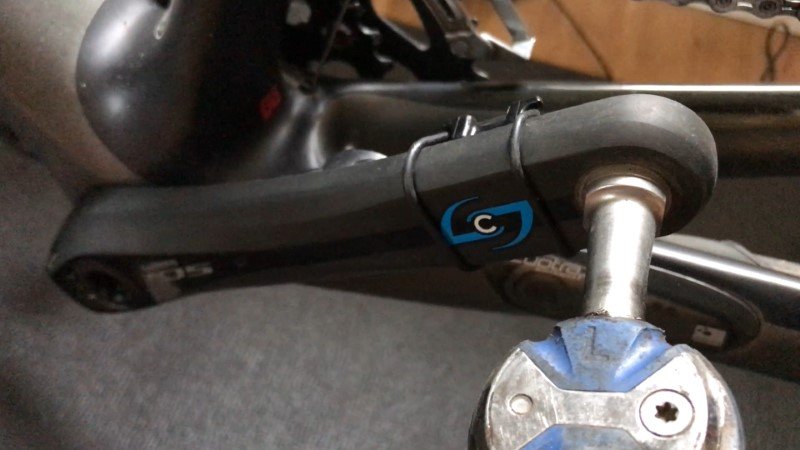 Anyway, the Zwift/Elite power estimation algorithm, along with other factors, disqualifies me from competing in the esports world championships but it’s good enough to track performance over time.

And, as we’ll see, fool me into thinking I’m fitter than I am.

I’ll come onto the trainer upgrade later in the post.

A Quick Word On Entertainment

You might think Zwift is engrossing enough but obviously not in my case. I’m as addicted to constant stimulation, mental, physical, rhetorical and perineal, as the next sheeple.

My mildly nerdical two monitor screen setup means I can have Zwift running on one and YouTube on the other. A constant rotation of old Sportive Cyclist videos of course. 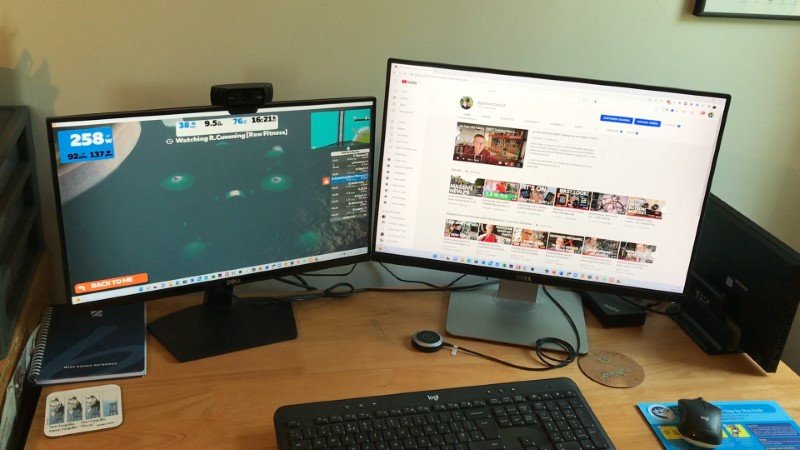 To avoid blasting out the volume so I can hear it over the trainer I use these wholly inappropriate Jabra noise-cancelling headphones. Who knew you could sweat from your ears?

So I need new headphones, if you have any suggestions.

The initial 2022 indoor set up comprised the aforementioned Elite – ha – non-smart trainer, an ANT+ dongle, and a dust sheet on the floor. 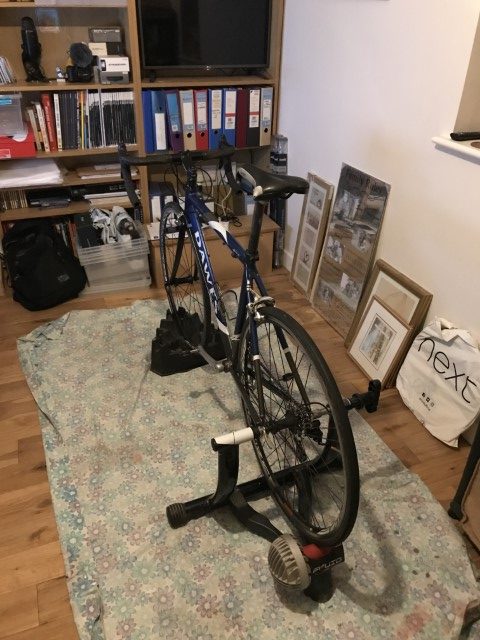 The first Monty reward was the purchase of a proper trainer mat, which I unlocked after riding three times on Zwift and proving to myself that I enjoyed it. 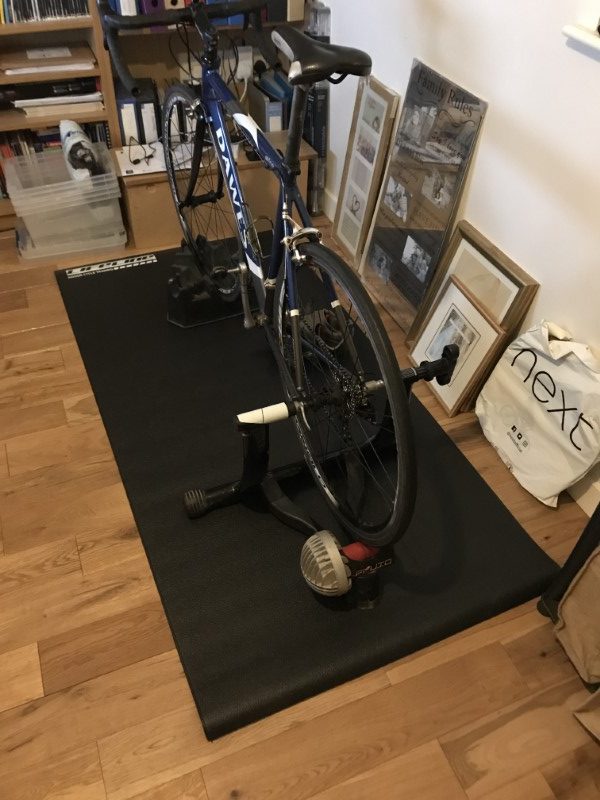 The mat is a LifeLine one from Wiggle and a Rod Hull of a lot cheaper than the Wahoo branded one. It does a good job of protecting my nice wooden floor.

I did most of my initial training programme without a fan, until I realised this was probably impacting my performance in harder sessions.

This is less an upgrade. More a retrieval. Of an old fan that we had in our loft: 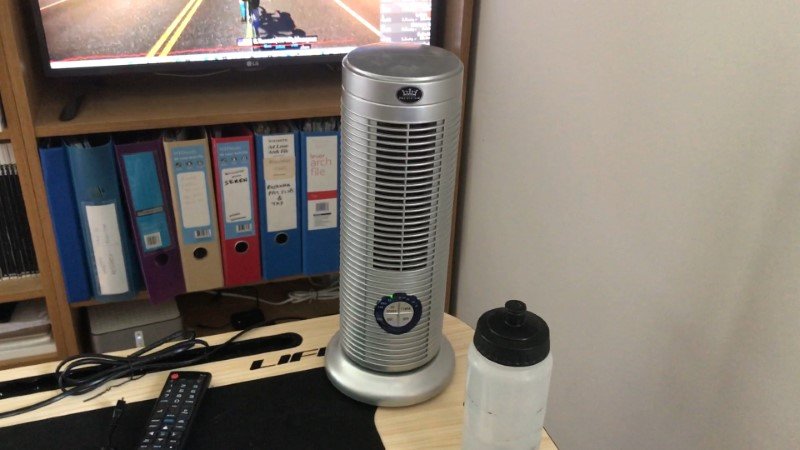 It’s not ideal – I can barely feel it – so another item to replace ahead of my next pain cave tour.

Next in this list of cadence cabin upgrades comes the big dog. So I present to you…

Not long into my first Zwift training programme I hit upon the great and entirely justifiable-to-my-wife idea of rewarding successful completion with the purchase of an expensive smart trainer.

You may question the calibration of this significant treat against the modest challenge of riding my bike somewhat consistently for six weeks. And I will choose to ignore you. 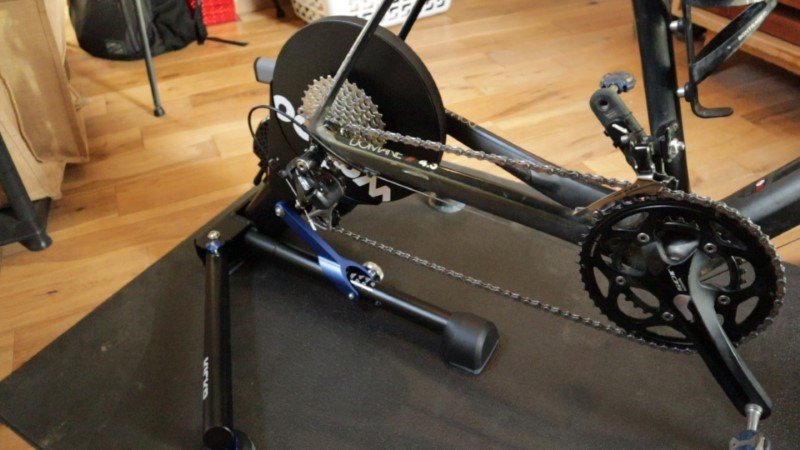 A quick summary of the Wahoo KICKR:

(Alert! Alert! Here is my much more detailed review of the Wahoo KICKR V5 smart trainer, after 5 months and 46 training sessions (and counting…)).

In addition to the whole smart trainery, controlling resistancy thing, which is obviously great, the KICKR’s arrival has made the moving of the setup to face the computer for each session impractical.

It is heavy, certainly to this weak torsoed humanoid.

Thankfully it’s unnecessary. My ANT+ dongle – also the nickname for my penis – now has no problem picking up the more powerful signal being given off (is that the term?) by the KICKR.

So now it stays in one place, at the side of the room, not encroaching on my home office setup. 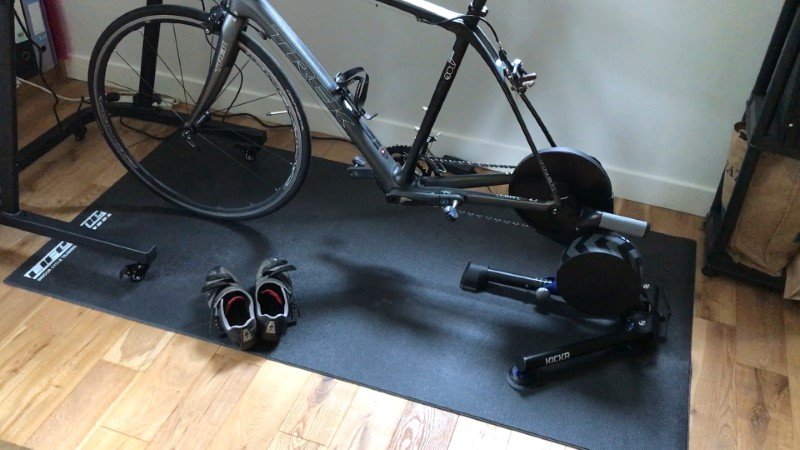 And it faces the TV. Right now I’m casting the Zwift display on my computer to the TV using a Chromecast. It’s not ideal. There’s a noticeable lag and frequently the connection drops out. I use this as an excuse whenever my performance disappoints. 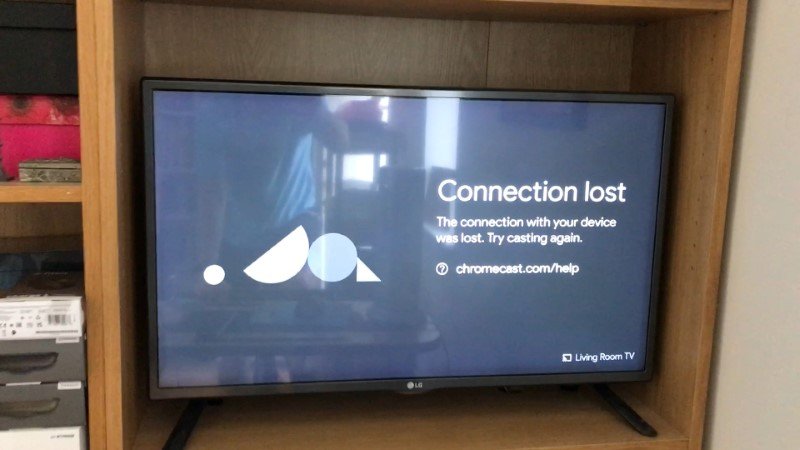 One solution may be to get an Apple TV to run the whole Zwift setup but that’s a topic for another post.

The new orientation of the trainer, and lack of any handy nearby surfaces to put stuff on – let’s ignore this window sill – meant I had to invest, yes invest, in a dedicated trainer desk.

I considered momentarily the Wahoo one. Very momentarily, as it’s expensive and there’s only so much play money generated by my online cycling YouTube and bloggery.

So again it was back to Wiggle and the LifeLine version. Which I’ve found very good. It was easy to assemble and it feels robust in use. 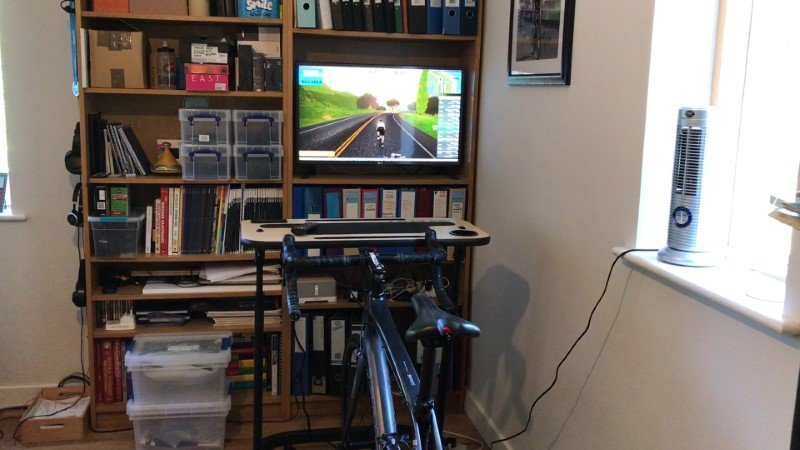 It has handy USB ports for my charging adventures, a standard plug socket for the fan and a bottle holder in easy reach.

There are also slots for propping up my phone or tablet, should I feel either needs a nice shower of sweat. 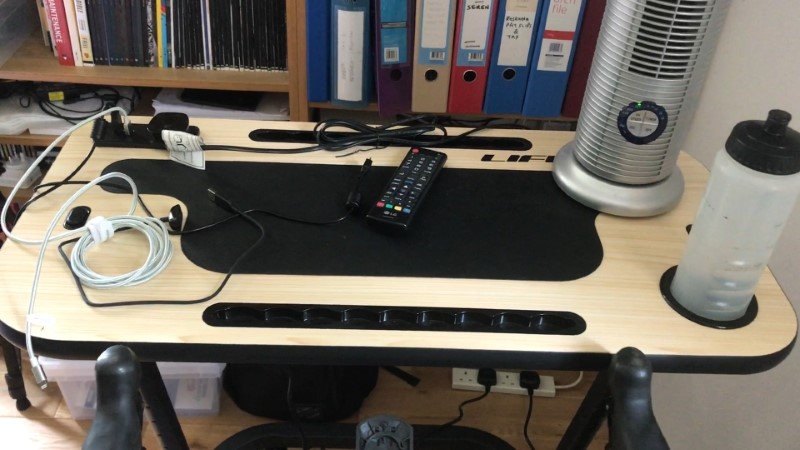 I can even use it as a standing desk for my real work should my buttox get too chafed by the birthing ball.

So that’s the setup as it currently stands. No doubt other upgrades will follow. I’ll document if any of them are sufficiently interesting.

How Wahoo Lost Me Power

But how, you ask, did this super dooper new training set up cause me to lose power and render all my training programme gains null and void?

Fine. You got me. The KICKR hasn’t reduced my actual power. It’s just provided me with a more accurate measurement of it.

And given its well below what the Zwift plus Elite algorithm had estimated, my ego has taken a beating.

I gave more detail in my first Zwift training programme post (and video), but my initial un-trained FTP, as measured by Zwift on the Elite trainer, was 197W.

This increased to 227W by the end of the six week programme, still on the Elite. 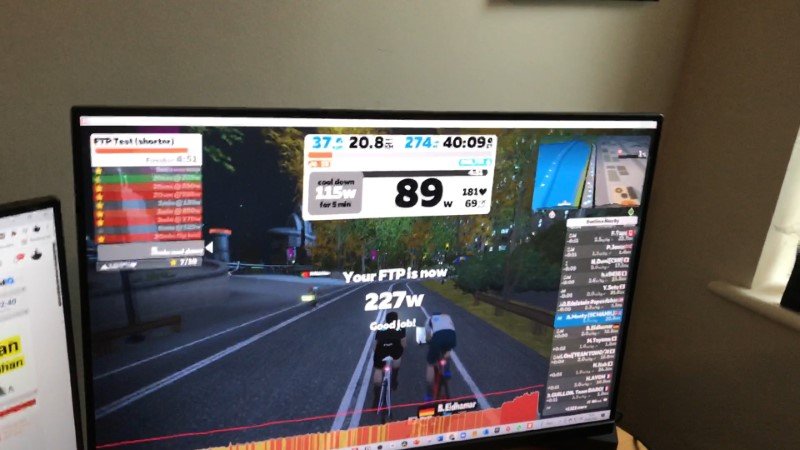 I then set up the KICKR and tried it out with a random Zwift workout based on my new FTP. It did not go well. I couldn’t hit the numbers. It was so much harder than it should have been. I think I knocked down the intensity by many percentage points just to get it done.

My memory is blurred by the raw emotions. Anger. Regret. Confusion. Tainted love.

Whatever, it must have been sufficiently obvious that I needed to re-measure my FTP. So I did. 4 days after the last one. 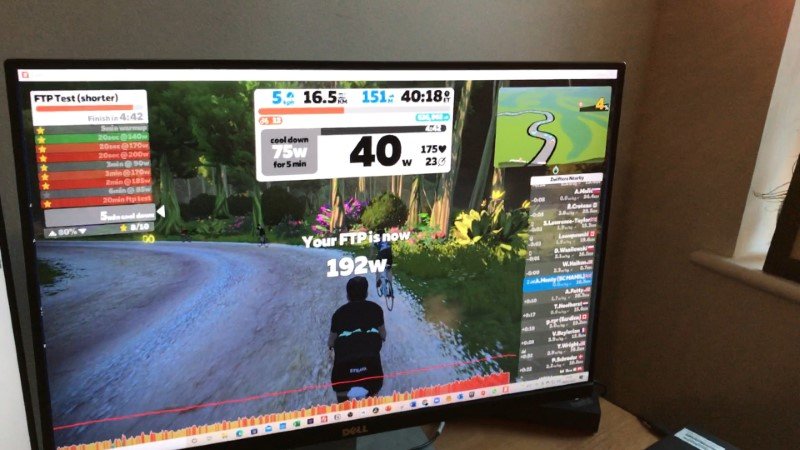 The result: a diminutive 192W. A headline loss – at least to this monkey mind – of 35W in less than a week, and a net net loss of 5W over the whole training programme. My power-to-weight ratio back below 2.8. Brilliant.

Is There Any Upside To This Tale of Woe.

Putting a positive spin on it, at least I know where I am. I’m no longer subject to the Zwift plus dumb trainer accuracy of +/-20%. My workout efforts are now properly calibrated.

And I have a Wahoo KICKR. I can compete in the esports world championships. Which is something.

That’s it from me. I’ve got future upgrades to the sweaty cleft watt grotto planned. If you want to see those videos, make sure you subscribe.

I’ve been Monty. This is Sportive Cyclist. I’m off to fiddle with my dongle. Monty is an enthusiastic road cyclist with only moderate talent. He started Sportive Cyclist in 2013 to record the journey to his first 100 mile ride, the RideLondon 100. Over time the blog has expanded to include training advice, gear reviews and road cycling tales, all from the perspective of a not-very-fit MAMIL. Since you’re here, Monty would also like you to check out his YouTube channel. Also, Monty really needs to stop referring to himself in the third person.