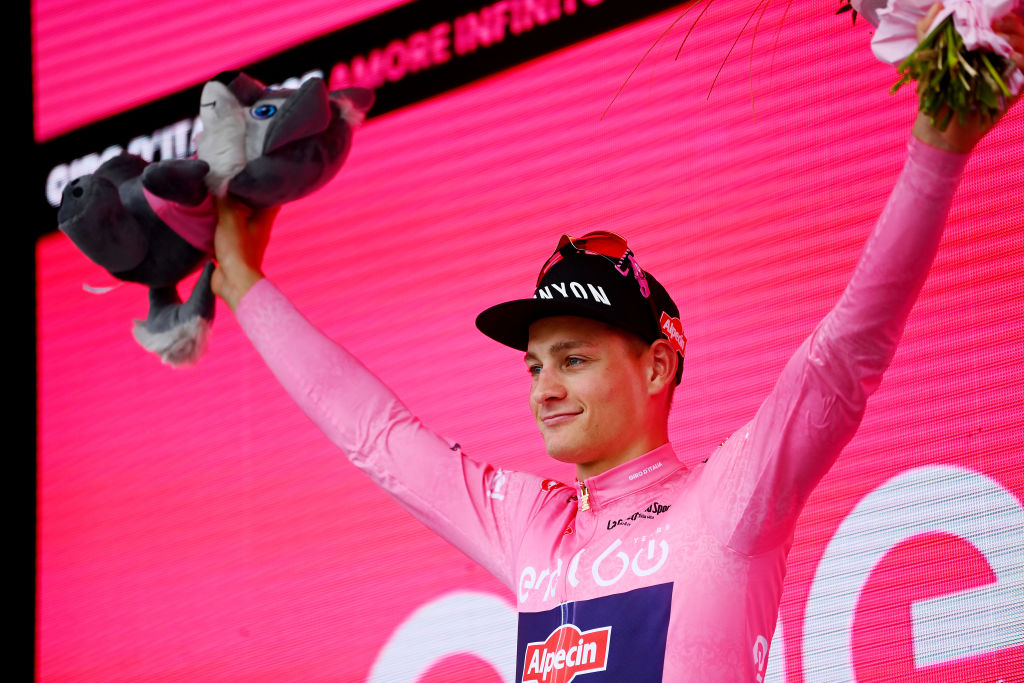 Mathieu van der Poel (Alpecin-Fenix) came through a long stage in the Giro d’Italia with his lead unscathed and all but unchallenged on Sunday, but he recognised that almost as soon as the race returns to Italy, he will likely be seeing his time in pink reach an end.

The Dutchman pinpointed the hour-long ascent to Mount Etna on Tuesday as a likely end of the road for his spell in the maglia, although Van der Poel promised he would continue to fight for stage wins regardless and would try to complete the entire race come what may on Tuesday.

“Today [Sunday] for sure was a nice day, I enjoyed it, and I’m happy to be able to take the jersey to Italy as well,” Van der Poel said when asked about how he had got through what looked like a trouble-free, if lengthy 201-kilometre, stage, “it was very special with lots of crowds.

“Normally it won’t be possible to keep the jersey on the Etna. I’ll see how it goes and how I feel, but I don’t know how far I can go.”

Van der Poel might have been in the lead, in any case, but he switched to a  helper’s role for a day, working as a lead out for teammate Jakobo Mareczko. The Dutchman and Italian lost contact during the usual tumult of the finale and even though Mareczko was able to make his way through, he took fifth in the sprint.

Van der Poel, subsequently 17th himself, said that after they had been separated, there wasn’t anything more he could do to help.

“I think we did a good lead out as a team, but Mareczko lost my wheel at a roundabout late on,” Van der Poel recounted.

“I looked behind me but I couldn’t see him any more, and it didn’t make any sense for me to go on. It’s a pity he got boxed in but I could do a pretty good job.”

Come what may, in any case, Van der Poel has arguably more than fulfilled his brief with a win on stage 1, a narrow defeat on stage 2 in the time trial, and a lead for three days and counting. From hereon for the Dutchman in fact, anything in this year’s Giro d’Italia is a huge bonus.

Julian Alaphilippe on road to recovery: ‘The option of the Tour de France is still open’