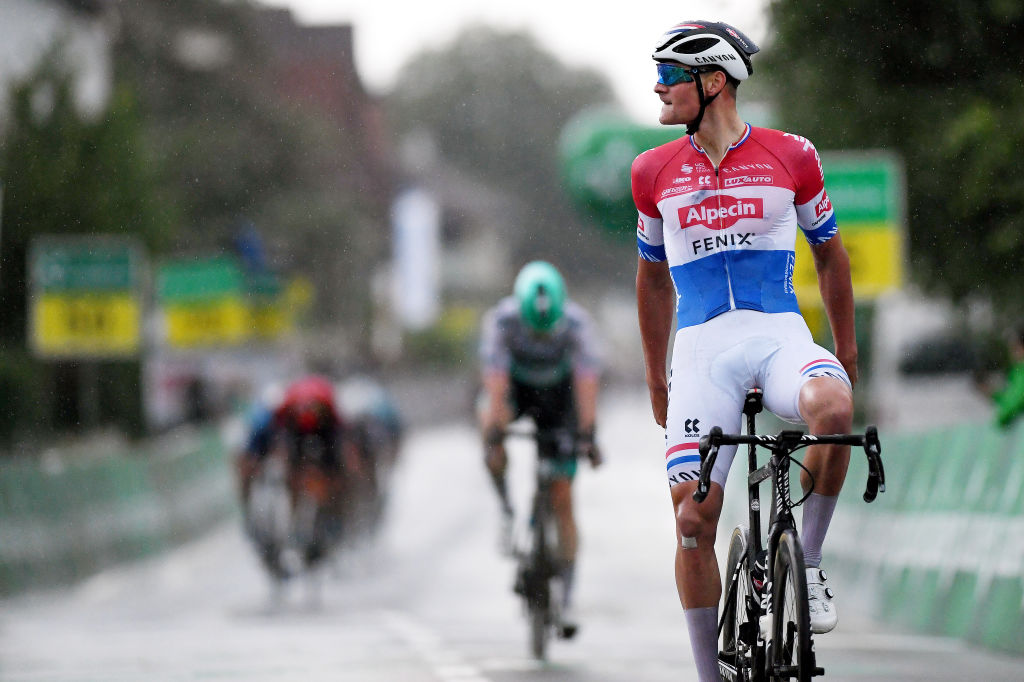 Mathieu van der Poel (Alpecin-Fenix) may have just stepped back onto the road after a stint on the mountain bike but he’s already made it to the top step of the podium, taking victory on stage 2 of the Tour de Suisse after hauling himself back into contention despite being gapped on the final climb.

A little over seven kilometres out from the line and it looked like the rain soaked stage to Lachen may well have been riding away from the Dutch champion after world champion Julian Alaphilippe (Deceuninck-QuickStep) delivered a fierce attack on the 2.4 kilometre climb with an average gradient of nearly nine percent. It was an effort that split the field, with van der Poel initially struggling to respond even though he felt that this was a day where the Classic-like terrain and his form meant he could make a mark.

“I had a good day and I asked for the team to make the race hard and they did a perfect job and then it was, especially on the last climb when Alaphilippe attacked, that I was a bit in difficulty,” van der Poel said in an interview on Cycling Pro Net after the stage. “I could ride my own pace but I didn’t really have the jump in the legs.”

Riding his own pace turned out to be enough with the 26-year-old, who is set to make his Tour de France debut later this month, working his way back toward the top of the climb and making it into the front selection of nine riders. Then Alaphilippe and Max Schachmann (Bora-Hansgrohe) also tried to get away on the descent but van der Poel again turned out to be unshakeable and the small front group stayed together.

As a result the stage looked likely to end with a sprint from the front group but van der Poel then attacked with about 3.5 kilometres to go. Other riders tried to cling on, but their hold was tenuous at best, and while the gaps were small as the line approached it was just Schachmann that ultimately held firm on the wet roads to mount anything that looked close to a challenge.

“I feel like I had something left still to go for a good sprint and I think I timed it perfectly,“ said van der Poel.

Van der Poel held his position at the front and powered across the line, distancing Schachmann and keeping the rest of the chasers at bay to capture his fifth win of the year on the road. Before the Tour de Suisse van der Poel hadn’t raced on the road since the Tour of Flanders in April but wanted to walk away with a stage victory. That left him with no time to waste as the first three stages, before the climbers come to the fore, represented the best opportunities.

“The team did a great job making the race hard. I’m happy to finish it off,” said van der Poel.

Woods: ‘I did all I could’ in hunt for a medal at Olympics

Tokyo Olympics: Geraint Thomas – ‘I’ve been worse, but I’ve been a lot better’