Lorena Wiebes buys into DSM’s all for one spirit 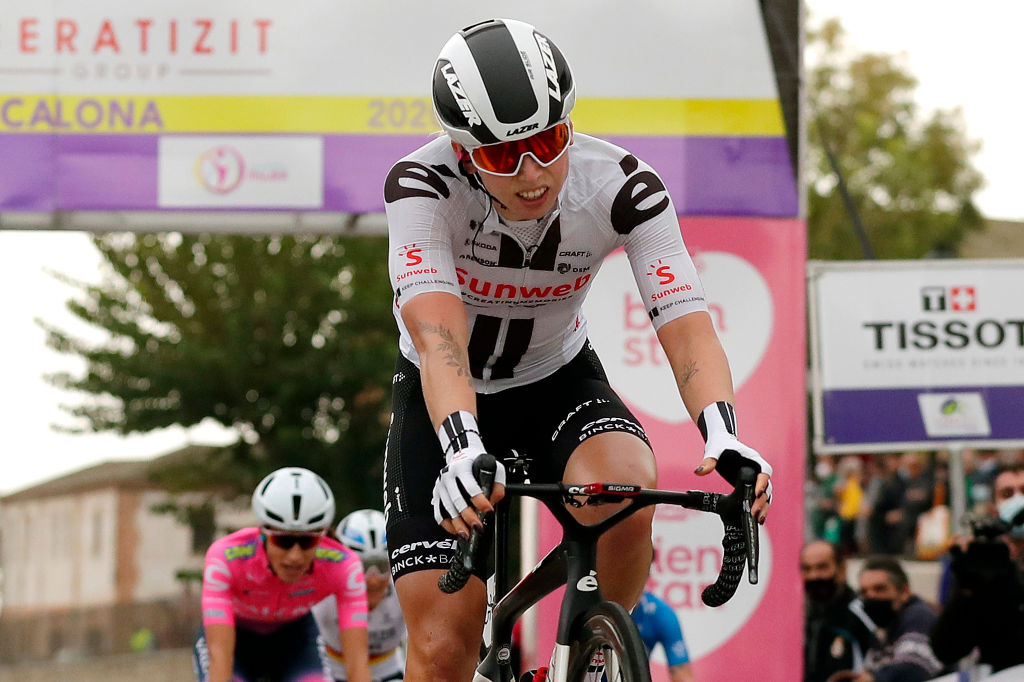 After a protracted transfer storm and a disjointed yet successful season, Lorena Wiebes is looking forward to calmer and clearer waters at Team DSM.  The highly-rated 21-year-old made the switch from Parkhotel to DSM – then Sunweb – in June of last year and quickly set about settling into her new surroundings with three wins in just nine days.

Those victories – the GP Euromat, the Driedaagse De Panne and the opening stage of the Vuelta Challenge – were a stark contrast to the start of the season, which began with legal disputes and court action as Parkhotel and Wiebes battled over her future.

“It was a strange season and even stranger with the pandemic,” Wiebes told Cyclingnews.

“The first part was really short with races and then I just trained. The second half was strange too but we had a nice training camp and that was a nice experience. It was nice to finish the season off with some wins though, and that was really pleasing.”

The dispute with Parkhotel was resolved by June, meaning that Wiebes could sign a four-year contract with DSM that will take her right up until the Paris Olympic Games in 2024. She admits that the fallout with Parkhotel was stressful and difficult but that once clarity was reached she and her former team could work together in the short-term.

“It wasn’t that tough because, in the end, it all became clear with ParkHotel, and when everything became clear it was a lot easier. For me, the hardest part was just to keep on training during the season because I’m someone who prefers just to race and race, so that was harder than the whole ParkHotel situation,” she said.

“It was a hard situation, but by January it was clear that I would ride half a season for them. You have to be professional and I and the team both wanted to win races. We kept it professional so it wasn’t stressful once the situation became clear.”

The clean slate at DSM provides Wiebes with both clarity and structure. Although her complete race calendar has yet to be announced, and the German-registered team has a number of sprinting options, Wiebes has been pleased with the seamless transition that she’s already made with her new teammates.

“They’ve given me a lot of motivation,” she adds. “They’re based in the Netherlands, and they’re really professional. They keep challenging part of the team is great and they’ve just made me feel really welcome. It’s also about my development as a rider and the progression of the team and how we want to be the best women’s team in the world.” With Coryn Rivera also in the team, Wiebes is also well aware that the entire team will not be at her disposal when it comes to sprints and lead-outs. Wiebes accepts that at times she will be required to work for others as the team targets a variety of races as well as their ambition of becoming the best women’s team in the world.

“We want to have a really good sprint train. I don’t know the line-up completely and it will change from race to race but for sure Coryn Rivera and Susanne Andersen are going to be two of the most important riders. They have experience, and of course a rider like Julia Soek is also really important.

“We’ve also got some younger girls coming through and we have to also learn from each other and get better. That’s all about a process and we’ll need to learn in the races. In my first win with the team it was the perfect level. It was at a lower race, it wasn’t WorldTour, but that experience of a leadout was really important. We need to trust each other and for me it’s different because before I would do a lot of my sprints alone.

“Coryn, I think that she’s better in uphill sprints, and when the race is harder but the most important aspect is that we want to work for each other and we’ll all get our own chances. We all believe in each other.”

‘Age is a state of mind’ – VeloNews.com