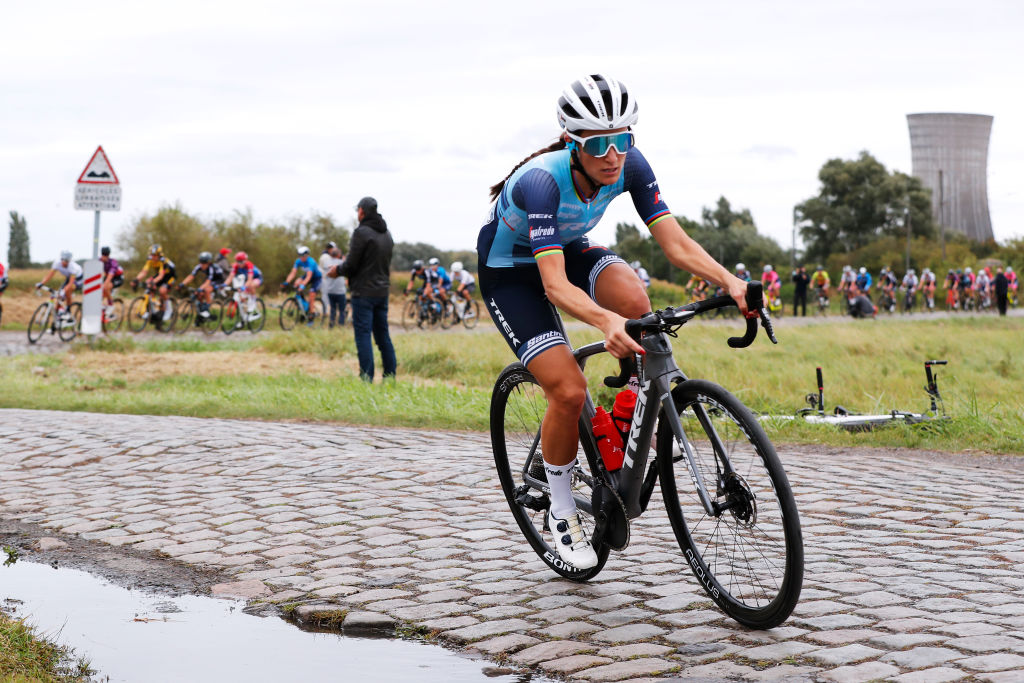 Lizzie Deignan (Trek-Segafredo) believes that only a complete rider will win the 2022 Tour de France Femmes after the race route was announced on Thursday in Paris.

The eight-day race lacks a time trial but has two back-to-back mountain stages, opportunities for all-rounders and sprinters, as well as a stage that features several sectors of gravel roads.

The 2021 Paris-Roubaix winner did not attend the route presentation after a long season on the road but the former road world champion was enthused by ASO’s and Marion Rousse’s first route as race director.

“I think the organisers have done a really good job preparing the route for this edition. I think it will showcase the best that women’s cycling has to offer with a stage suited to every type of rider, something I was really hoping for,” Deignan said.

“The route has been designed to offer entertaining racing from start to finish, but also to reach a crescendo with the final stage finishing on the Super Planche des Belles Filles, one of the hardest climbs in professional cycling.

“I think each stage is dynamic, different and interesting. There are so many challenges thrown into just eight days of racing. I’m particularly interested in the fourth stage between Troyes and Bar-sur-Aube; the unpaved roads are unusual and something we don’t often encounter.

“The inclusion of a stage with gravel sectors will mean it’s likely to be a complete rider who wins the Tour de France Femmes. I think you can either win or lose the entire race on a stage like this; it’s not just going to be about who can climb the fastest on the final stage, it will open up the GC early.

“Personally, I’m a fan of the gravel stage; I love Strade Bianche and have won that before. Also, the fifth stage at 175km long will be interesting as we normally don’t race close to this distance, especially during a stage race.”

Thursday’s route unveiling was a significant moment in women’s cycling, with the Tour de France returning to the women’s calendar after a long absence.

The eight-day race gives women’s cycling the much-deserved opportunity to race on the biggest stage in the world with a centerpiece event that will hopefully attract sponsors, revenue, and fans. Deignan acknowledged that women’s cycling is moving in the right direction and showing progress.

“It’s an important day for cycling, not just women’s cycling, with the route unveiling for the Tour de France Femmes. It is a key indicator that the sport is still progressing as we are now able to compete in the most well-known bike race in the world,” she said.

A raft of top-level female riders were in Paris for the route presentation, including Deignan’s teammate Audrey Cordon-Ragot and newly-crowned world champion – and future Trek-Segafredo rider – Elisa Balsamo. Deignan predicted that because of the race route and the variety of stages within the race, the yellow jersey will change hands multiple times.

“I expect the first yellow jersey to go to a sprinter, but then also to change hands many times along the way which will be exciting for the fans. We’ll see lots of super-motivated riders and everyone will be in top shape because there are opportunities everywhere,” she said.