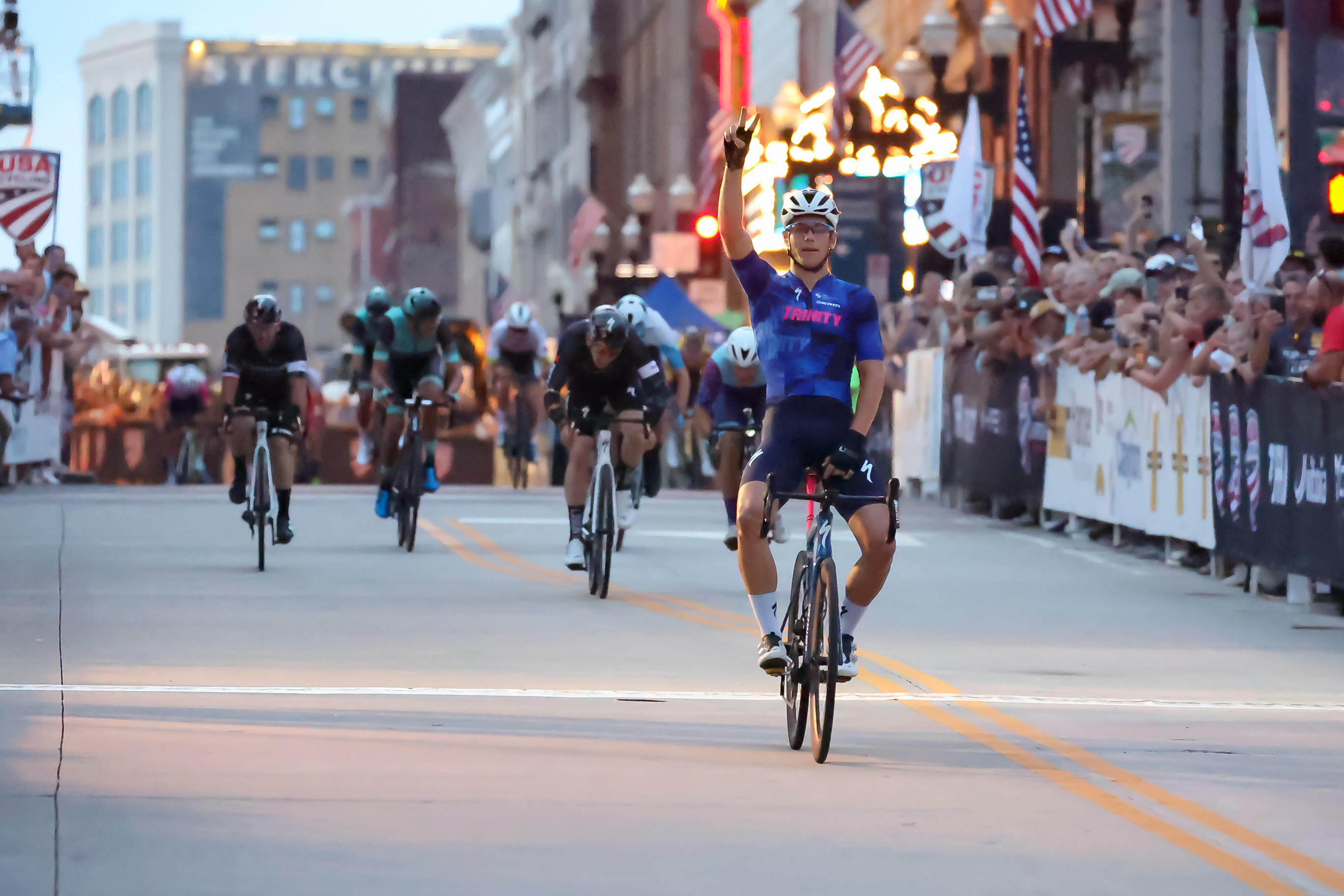 In a photo finish for the final two spots on the podium, Gavin Hoover (L39ION of Los Angeles) finished second and Scott McGill (Wildlife Pro) was third. L39ION’s Ty Magner trailed for fourth.

“You have a little more knowledge when you come back to the same course. The thing I learned from last year was the earlier you jump the better,” said Lamperti with a second stars-and-stripes jersey in the criterium. “You have to come out of that last corner ideally in first, but you have to be right up there the whole time.”

“I was a little worried about the two guys off the front but it comes down to the two bigger teams here, Best Buddies and L39ION, who bring it back. So there can be benefits to riding by yourself.”

Lamperti’s blast from the peloton looked very similar to the way he won last year, making a successful defense to his pro criterium championship. And for a second year he also rode without any teammates, being the lone American on the 20-rider British-based Trinity squad.

“It was a super chaotic day, everyone could feel that there was no one to really control it, people were going up the road all day,” Hoover told Cyclingnews about L39ION of Los Angeles team strategy for the finish. “It’s my third time to do this race and first time to make it on the podium!”

Wildlife Pro Cycling got McGill on the podium, holding off strong rides by Magner, Hugo Scala Jr (Project Echelon Racing) and Michael Hernandez (Best Buddies Racing) in the final sprint to the line.

“I just followed my teammate Noah Granigan, that’s all you have to do. He led me until three turns to go and I kinda went on my own and it was a little bit scrappy. Then I got stuck behind L39ION and they let Luke [Lamperti] go, I guess they could not go around the turns fast enough and then Luke won. I did the best I could in the sprint but the race is over with three turns to go.

“Pretty disappointing honestly, we came here to win. To get a podium is always good but definitely we will be looking forward to Sunday’s race.”

The 80-minute pro criterium for elite men saw 89 riders hit the 1.7km course in the Friday twilight in downtown Knoxville.

Now in its fourth year for the US Pro Criterium to be held in the college town nestled in the foothills of the Great Smoky Mountains, the decisive section of the course was again on the climb on Clinch Avenue with a right, then left, then a final left-hand turn onto a downhill finish to the finish on Gay Street.

The men hit the throttle immediately, the pace stretching out the peloton in single-file formation on the first lap. Defending champion Lamperti was one of the riders surging to the front to try to make something happen.

It took 15 minutes for a small group of six riders to form a small gap with Lamperti again taking the initiative to go out front but a breakaway never developed.

Half an hour passed before the duo of Riley Sheehan (Premier Tech U23 Cycling Project) and Kaler Marshall (Expeditors Elite Cycling Team) made separation on the back side of the course for the first break of the day.

Seven minutes later Ethan Moyer (Rio Grande Elite Cycling) made it three at the front. But a few laps later the trio stopped working together and like a flood, they were swallowed up.

George Simpson (Project Echelon Racing) was next to attack and the chase behind stretched out the peloton yet again. It took a few laps, but L39ION of Los Angeles began to move closer to the front.

The duo of William “Cooper” Johnson (Aevolo Cycling) and Will Hardin (Project Echelon Racing) made an organised effort with almost 15 laps remaining and with 9 to go had a 20-second gap on the field. Two laps later, Jonny Brown of Miami Blazers made an unsuccessful solo quest to catch the duo, with six L39ION riders leading a charging peloton.

The Aevolo-Project Echelon duo continued to stay away for four more laps, the intensity of the crowd beginning to grow as the pair seemed to have a chance to contest for the victory, holding a lead of 19 seconds with three laps remaining.

On the penultimate lap, Best Buddies Racing began to show their cards and took over at the front, with Lamperti stalking near the front of the peloton. The break was caught and on the final turn onto Gay Street the 2021 champion rode across the line all alone to go back to back with the stars-and-stripes jersey.

“We said we would take the front at seven [laps to go] and even if we don’t hold it we’ll be safe and be up there,” silver medalist Hoover recounted at the finish how the final laps unfolded. “So we rode from seven to go and Best Buddies came around with two [laps], then it was me and Ty Magner freelancing and sitting as close as we could to the front.

“Then I went on the last lap up the hill trying to go for Ty and then figuring I would keep going all the way to the line and Luke shot inside with two corners to go and then I just kept going.”