Lampaert: I’m confident for the Classics after 2020 results 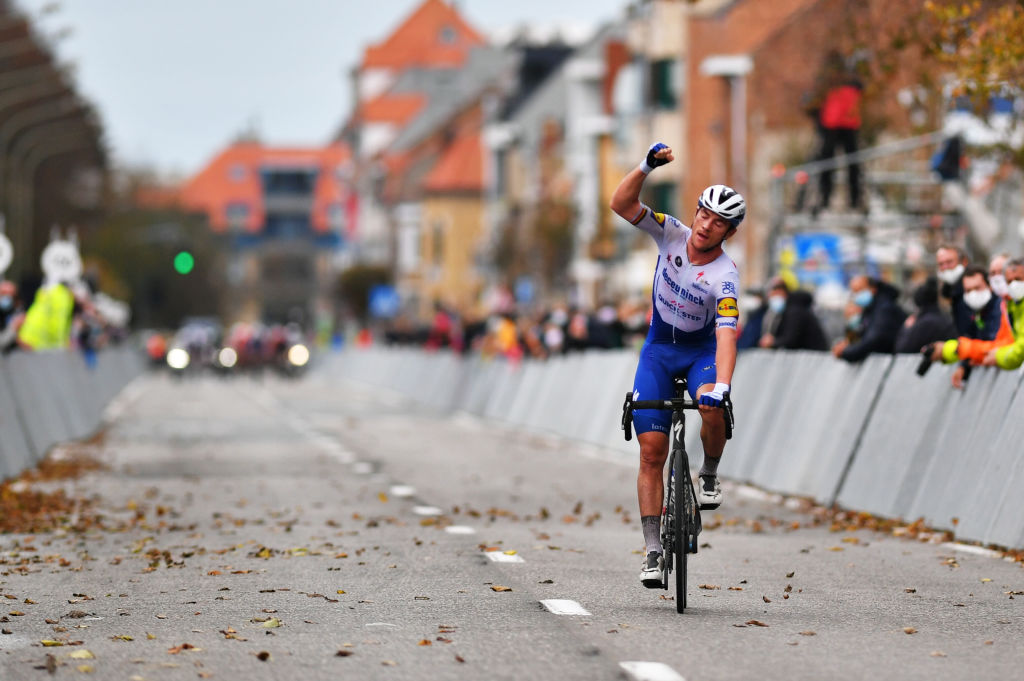 As one of several Classics leaders on powerhouse squad Deceuninck-QuickStep, Yves Lampaert heads into 2021 assured of his goals and confident after a strong end to the disrupted 2020 season.

The Belgian rounded off last year with his third Classic win, soloing to victory at the Driedaagse Brugge-De Panne ahead of teammate Tim Declercq. He added the race to a palmarès that already included two editions of the Dwars door Vlaanderen and a Vuelta a España stage.

Three days earlier, the 29-year-old had finished fifth at the Tour of Flanders, his best result yet at the race and another top result at one of the two cobbled Monuments after his third place at the 2019 Paris-Roubaix. The aim, one day, is to stand on the top step of the podium at one of the two.

“Is it time for me? I hope it is,” Lampaert said when asked about the prospect of winning Flanders or Roubaix at Deceuninck-QuickStep’s pre-season media day, held via video link due to the COVID-19 pandemic.

“I hope I can win a nice big Classic, but of course it will not be easy. I hope, first of all, that we have a good preparation and that we can race as much as possible this year.

“I think last year gave me a lot of confidence for this year. I think I did a really good Classics campaign. I have to be happy with the results I did – I was almost always top 10, and I could win Brugge-De Panne, so it was a really nice one to finish off the season.”

With a reputation as the strongest Classics team in the peloton, Deceuninck-QuickStep is no different this year. Lampaert will be joined on the cobbles by world champion Julian Alaphilippe, who crashed out of a contending position on his Flanders debut, Gent-Wevelgem runner-up Florian Sénéchal, perennial contender Zdenek Štybar, and 2019 Flanders runner-up Kasper Asgreen.

Around the peloton, teams have tooled up to take them on – as well as the all-star rivals Mathieu van der Poel and Wout van Aert. AG2R Citröen have rebuilt, with Greg Van Avermaet and Bob Jungels joining Oliver Naesen, while at Lotto Soudal, John Degenkolb, Tim Wellens and Philippe Gilbert will teamed up again with some young support.

Lampaert has no doubts about his own team’s strength, however.

“Of course, we come again with a really strong team and I think we can make a lot of scenarios to win races and to make it hard. I hope that we can do it as a team as much as possible,” he said.

“Van der Poel and Van Aert are very strong in this moment. I think they’ll also have to take more and more responsibility in the races. They can’t hide behind us anymore. That’s one point, but still, I’m very confident that we’re very strong.

“We can force races quite early and we don’t only have to look after our one main leader – we can go in a lot of different ways to the finish line. If we had some more luck last year in Flanders they would have finished with Julian, but okay that’s what happened. Let’s see what this year brings. We know they are there, but we have to have confidence in our own strength.”

While Lampaert enjoyed his 2020 campaign, which also included a second place at Omloop Het Nieuwsblad in February, teammate Štybar had a tougher time. The Czech veteran took a win in San Juan and was sixth at Strade Bianche but wasn’t in the mix at the October cobbled Classics. He’ll return this year with the same races on his plate, though.

“I think it’s very difficult now to say [my goals] at the beginning of the season because there are some uncertainties still, but of course the aim is the Classics.

“I think Omloop will be the first goal, then Strade Bianche, my favourite race. Then it won’t stop until Paris-Roubaix. I just hope to be ready and have a good shape all the time, and I hope to win something from them.”