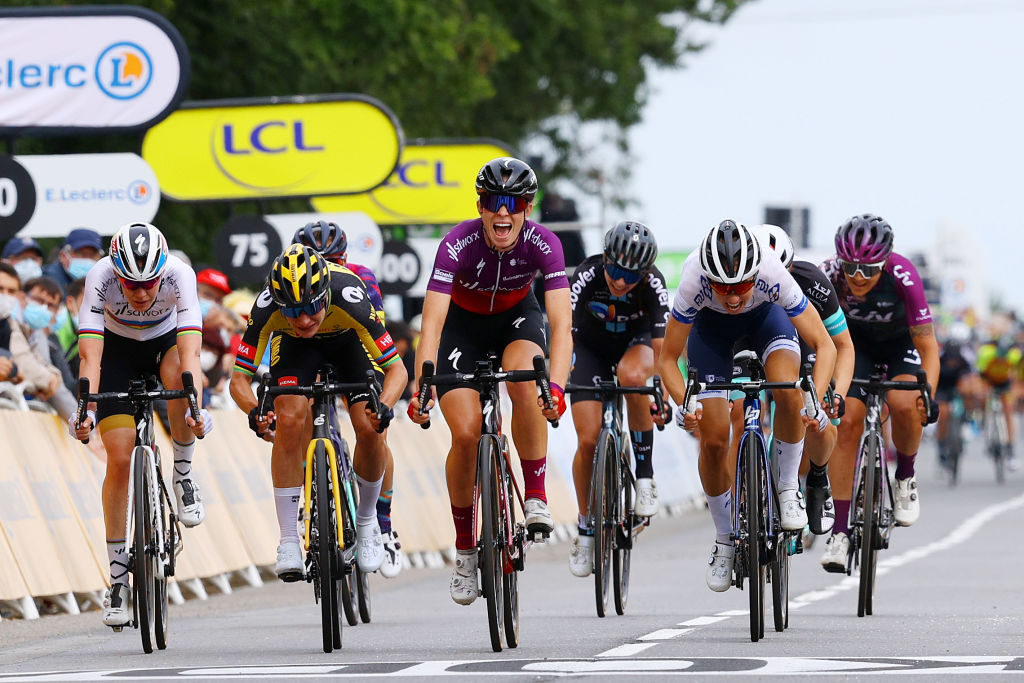 Marianne Vos pounced with 300 metres to go but, in a rare occurrence, faded to third place at La Course by Le Tour de France in Landerneau.

The Jumbo-Visma rider played her cards to perfection while riding up the slopes of the final climb – Côte de la Fosse aux Loups – with a select group but she later admitted that she wasn’t feeling her usual freshness as Demi Vollering (SD Worx) and Cecilie Uttrup Ludwig (FDJ Nouvelle-Aquitaine Futuroscope) passed her at the line.

“I was in a good position for the sprint, but unfortunately I didn’t have the power anymore. Of course I’m a little disappointed that I didn’t win,” Vos said.

“But I also have to be realistic. I gave everything I had, but I already felt that the freshness was gone when I started my sprint. Vollering was faster today.”

Vos was hoping to win the eighth edition of La Course by Le Tour de France for a third time in her career, after winning the inaugural edition in 2014 in Paris and the 2019 edition in Pau.

This year, the women’s peloton raced a 107.4 kilometre course that started in Brest and finished with three laps of a 14-kilometre circuit with the finish line atop the Côte de la Fosse aux Loups in Landerneau. There was a total elevation gain of 1,800m and the race was meant to favour the punchiest riders.

Over the top of the climb and on the final straight, Vos was the first rider to start her sprint, but she was passed at the line by Vollering and then Uttrup Ludwig and had to settle for third.

“I compliment the team,” Vos said. “They rode a very strong race today. With [Anna] Henderson we had a rider in almost every breakaway and in the peloton we were in control with Anouska [Koster] and Riejanne [Markus]. So everything went according to plan. Also on the climb. I was in a good position for the sprint, but unfortunately I didn’t have the power anymore.”

La Course by La Tour de France was created in 2014 following a petition to ASO calling for a women’s Tour de France. Le Tour Entier’s petition was led by Vos along with Kathryn Bertine, Emma Pooley and Chrissie Wellington and secured 97,307 signatures.

The event is now set to be replaced by the newly launched Tour de France Femmes in 2022. Vos said that she is looking forward to the eight day race set to start on the Champs-Elysees in Paris, and to be held from July 24-31 next year.

“The first edition was very special. I can still remember how great it felt to arrive there with the peloton and race through the historic streets of Paris in front of the world,” Vos said ahead of La Course. “The beautiful arrival on the Champs-Élysées was something I only knew from TV and now we were riding there ourselves.

“It’s very nice that the Tour de France for women is coming back to the calendar as a full-fledged stage race. With opportunities for different specialists and all the elements that make cycling so beautiful. So boys and girls can dream of the yellow jersey.”

Woods: ‘I did all I could’ in hunt for a medal at Olympics

Tokyo Olympics: Geraint Thomas – ‘I’ve been worse, but I’ve been a lot better’