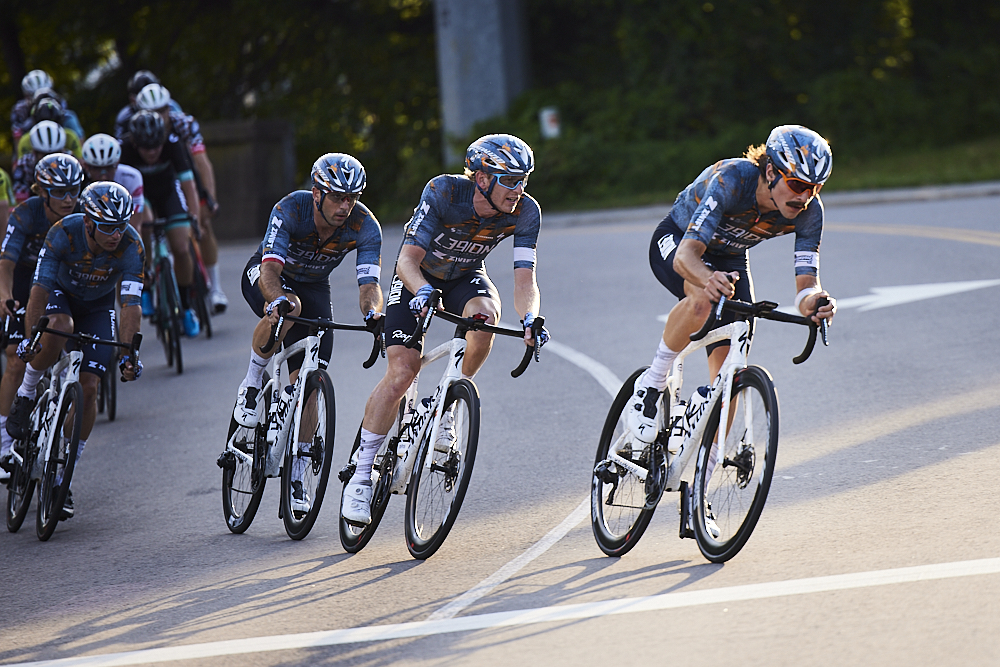 Criteriums are synonymous with thrills and spills, and the latter was the story on the second day of the USA Cycling Pro Road National Championships in the elite men’s criterium. A final-lap crash took pre-race favourites Cory Williams of L39ION of Los Angeles and Travis McCabe of Best Buddies Racing out of contention, both hitting the pavement before the final turn.

“It’s a Good thing I got thick bones!! Crit Nats didn’t go the way I planned but the legs are recoved from Unbound Gravel and Tulsa Tough either way I’m proud of the way Best Buddies Racing rode today and things are starting to click,” McCabe posted to his Instagram account Friday night after the race, along with a video shot from the bike of Brendan Rhim (Evo Pro Racing).

McCabe, the defending champion of the Pro Criterium and back racing in the US on the new Best Buddies Racing squad after a year with Israel Start-Up Nation, posted a video shot from the bike of Brendan Rhim (Evo Pro Racing) of he and Cory Williams on the pavement, and the instant Brandon Feehery of Project Echelon slammed into his back to summersault through the air.

“We took over the lead with two and a half to go. The swarm came from Elevate on third corner. I was behind Tyler and Cory [of L39ION], and Elevate jumped on the left side. We moved up to fourth and fifth into the final two corners. Cory had the inside line, so he had space to move, but he was fighting for position with the Aevolo rider and they got tied up. Then, I went over the bars, going about 28-30 miles per hour, and I got slammed from the back,” two-time Pro Crit winner McCabe told Cyclingnews about the crash.

“I am disappointed. The legs were coming around after Unbound and Tulsa Tough. You know, no one has won the national crit title three times, so it would have been special. It’s bike racing. Luke was incredible, chapeau to him.”

Just before the tricky turns from State Street to Clinch Avenue riders from Elevate-Webiplex and Best Buddies Racing had the positions in front of Cory Williams, and eventual race winner Luke Lamperti (Trinity Racing) was on the L39ION rider’s wheel, and would be one of the few to slip past the carnage.

“We rode at the front the whole race, and we got Cory in the perfect position, but then the crash happened. Cory is pretty banged up, but he’ll be OK. We are one team and the team still got a national championship,” teammate Ty Magner told Cyclingnews, referring to Kendall Ryan’s victory in the women’s criterium earlier in the day. She made her winning move in the same corners and held that position on Gay Street for a second national crown since 2015.

“We knew after last weekend that we were the strongest team in the race. We wanted the win for Cory. It just makes it easier when you ride at the front,” Magner said about L39ION controlling the front from start to near-finish. “We had the plan, it worked out all night, until Cory crashed, unfortunately. But racing is unpredictable. He was in a great spot to win the race.”

L39ION of Los Angeles was the pre-race favourite with a number of riders, including Cory Williams, Tyler Williams and Magner, who had dominated at Tulsa Tough a week ago.

They controlled the fast pace all night and never allowed any attack to exceed more than a seven-second advantage, including a number of assaults by Aevolo and Project Echelon throughout the contest, and late moves by Best Buddies Racing, Wildlife Generation Pro Cycling and Elevate-Webiplex Pro Cycliing.

After 76 minutes of racing for the elite men with dusk settling on downtown Knoxville, Tennessee, the men’s criterium championship was decided in a final minute of chaos on the technical turns prior to the finish.

“The guys raced really well today and I’m extremely proud of them. I thought we had a bit of bad luck on the final turn with that crash though. Besides a couple other teams, I think we were probably the most aggressive,” Aevolo team director Michael Creed told Cyclingnews.

“I’m a little disappointed in the lack of aggressiveness in the field, not sure if that’s due to the course, or the group itself. I think [the race] highlighted that there are some teams who get told to be at the front and that’s the extent of their plan, versus teams who actually try and animate the race and be a part of it. Congratulations to Luke, his ride was great, and he’s been good all season. He’s a deserving winner.”

Five riders escaped the crash scene, positioned at the front as the peloton stormed through the final three abrupt turns – a right, a left and the final left – on narrower streets before the downhill finish on the wide stretch to the finish on Gay Street. From that bunch, Luke Lamperti, a lone rider with Trinity Racing, outsprinted Elevate-Webiplex Pro Cycling’s Samuel Bassetti and Eric Young, to become the youngest rider ever to win the men’s Pro Criterium title. John Heinlein III of Project Echelon was fourth and Aevolo’s Eric Brunner finished fifth.

“Super hectic day, everyone wanted L39ION’s wheels, staying out of trouble [worked] for me today in the crit. I was able to get up there on Elevate and get around in that last corner,” the 18-year-old said at the end of the race.

From the Elevate squad, Bassetti finished second and Young finished third, both denied an evasive title. Bassetti had taken second place before and Young had finished runner-up three consecutive times.

“It was a pretty typical Crit Nats for this course. There was a lot of momentum on the course, and pretty easy if you have a good team to bring things back, L39GION showed that. They controlled most of the race. But then it’s a really dynamic last half-lap finish,” added Young.

The Gear That Got Me Through My First Bike Tour