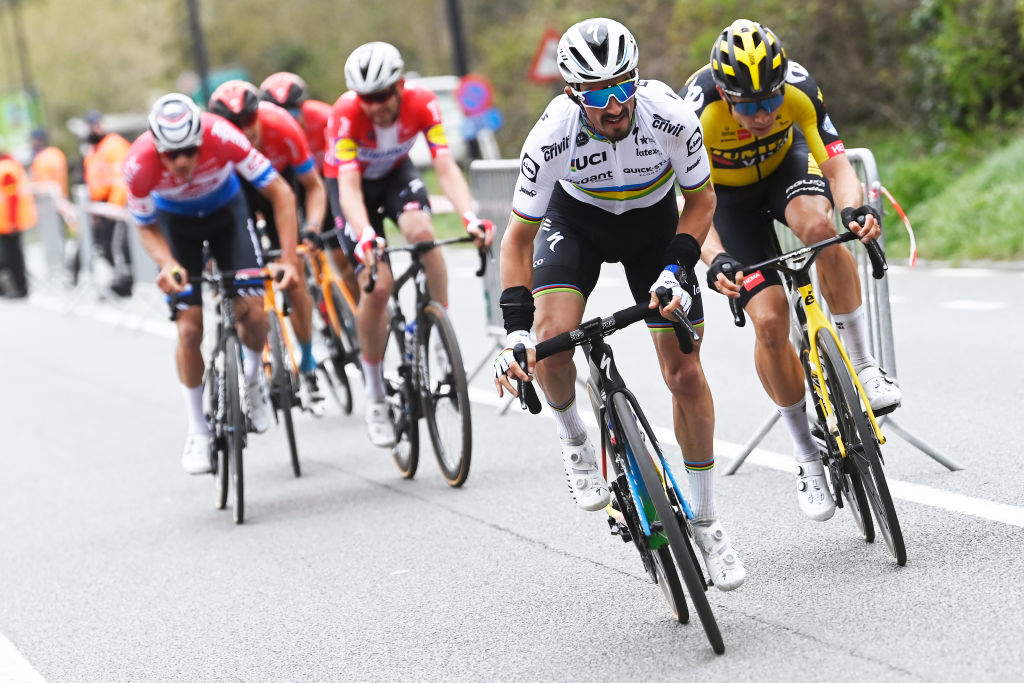 Ahead of his return to Amstel Gold Race on Sunday, world champion Julian Alaphilippe has compared the new, circuit-based parcours to the World Championships, noting how challenging and nervous he expects Sunday’s race to be.

The race – the biggest of the Dutch cycling calendar – hasn’t been held since 2019, when Alaphilippe missed out on a possible victory in devastating fashion after Mathieu van der Poel’s iconic late charge.

This time around, due to the COVID-19 pandemic, the race will take in 13 laps of a closed circuit, starting in Valkenburg and ending in Berg en Terblijt, taking in 12 ascents of the Cauberg along the way.

Alaphilippe will lead Deceuninck-QuickStep at the race, having last been in action at the Tour of Flanders, where he helped Kasper Asgreen to a memorable victory. The Frenchman rode a recon of the course on Friday, giving him an insight into the difficulties of the new-look Amstel Gold Race.

“I think that the race will be an even more nervous than usual. You can compare it to a World Championships, which is also on a circuit and requires a lot of energy and concentration,” he said in a virtual press conference on Friday.

“We have to stay focused because there’s a lot of road furniture. It’s not those that make the race difficult, however, but the series of climbs, while having much less recovery than normal, which will be difficult. Having to climb Cauberg 12 times says enough.

“But we are focussed on what we have to do, and we will see how we organise ourselves. The team that will control the race will have some advantages. We’re used to doing it, but we’ll have to see how it goes.”

Alaphilippe has taken the two weeks since Flanders to head to a training camp ahead of Ardennes week, which will also see him take on La Flèche Wallonne and Liège-Bastogne-Liège next Wednesday and Sunday.

He has won Flèche twice – in 2018 and 2019 – and came closest to victory in Liège back in 2015, where he finished second behind Alejandro Valverde during a breakthrough week of results in his second season as a professional. He said on Friday that he feels his form is good going into Amstel, though it’s the latter two races where he’s focusing much of his attention.

“The form is good. I am motivated for Amstel Gold Race as well as for Flèche and Liège next week,” he said. “These races are important objectives in my season. It wasn’t easy to manage my form, but I have recovered well, and I hope to get good results.

“Flèche suits me the best, but I dream of winning Liège. Of the three Ardennes Classics, Amstel is probably the one that suits me least, but I’m taking all three races to heart to close this part of the season.”

The 28-year-old, who recently added three years to his contract with Deceuninck-QuickStep, will have Mauri Vansevenant by his side this week, with the 21-year-old given a protected role in the team after impressing so far this spring.

Already, Vansevenant has the GP Industria e Artigianato on his palmarès, in addition to top 10s at Settimana Coppi e Bartali and the Tour de la Provence, plus an 11th overall at Itzulia Basque Country.

“He is very motivated as always and he has performed well lately,” Alaphilippe said. “The Ardennes Classics suit him very well. He will be a rider who will be protected in the race and he’ll have his card to play.”

Alaphilippe, who will be looking to add to his solitary win so far in 2021 in the form of a stage at Tirreno-Adriatico, also has his eye on another 21-year-old this week: Ineos Grenadiers’ Tom Pidcock.

“When you see Tom Pidcock’s performance in Brabantse Pijl, I think he is also capable of winning,” he said. “I also think Wout van Aert will want to do well in his last race of spring.”