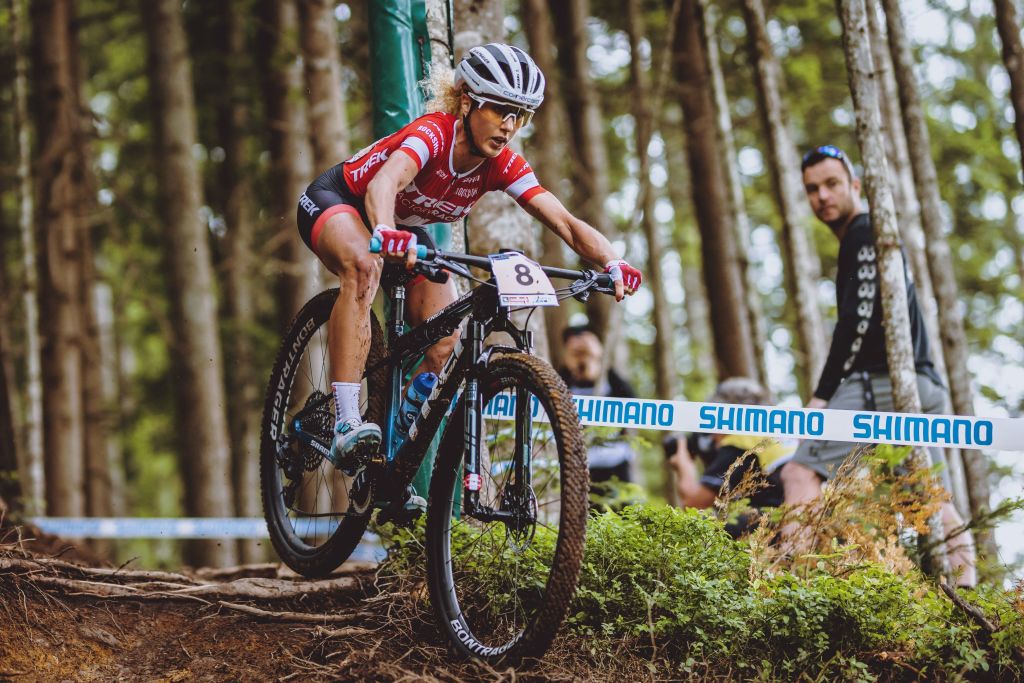 Jolanda Neff (Trek Factory Racing) managed to take fourth place at the Leogang World Cup cross-country mountain bike race, despite finishing it with a broken hand after crashing heavily while on the charge near the end of the second last lap.

Neff had been ensconced in the lead chase group with Pauline Ferrand Prévot (Absolute-Absalon-BMC), Laura Stigger (Specialized) and Jenny Rissveds (Sweden) during the fourth lap of five – behind race leader and ultimate winner Loana Lecomte (Massi) – but then Neff began opening up the gap, quickly pulling out 15 seconds.  After a lean 2020, it looked like Neff was working back towards the form and results she had been delivering before being disrupted by a serious crash at the end of 2019. The short track race at Leogang in the days before was the first time she’d been on a World Cup podium since.

However, after panning away from the then second-placed Neff to focus on other groups in the race for a short time, the camera returned to the Swiss rider being passed by Stigger, and then she soon was overtaken by Ferrand Prévot. The 28-year-old, who had moments ago looked like she was charging toward second, was showing the telltale signs of having come off with dirt on her kit and absent glasses.

“It looks like I broke my hand but I’m good, other than that I feel okay,” said Neff in a video posted on Instagram. “I had a pretty big crash which was not on camera. But I managed to keep riding.”

Rissveds passed Neff and powered on to take second while Stigger held on for third while the Swiss rider, despite the crash, again caught and overtook the world champion, Ferrand Prévot.

“I finished in fourth place and my legs were definitely feeling a lot better,” said Neff. “I was very happy about my race.”

The ramifications of that crash for the Swiss champion, however, aren’t clear.

She’s been selected to represent Switzerland at the Olympic Games in the women’s cross-country mountain bike race, alongside Sina Frei and Linda Indergan. Neff competed in both the mountain bike and road race at Rio, taking sixth and eighth, however, Marlen Reusser was named for the single spot for the women in the road race and time trial for Tokyo.

As a result, Neff’s focus remains purely on the July 27 mountain bike event and it had looked like the 2017 world champion was returning to form just in time. There is also another World Cup coming up before then at Les Gets in France, with the XCO race on July 4.

Motioning to her broken hand during the Instagram video Neff said: “I’ll keep you posted on what’s going to happen with this one and how we are going to continue but for the moment I just wanted to say I am okay and thanks for all the messages.”

Adam Yates: I didn’t have the legs in Olympic Games road race

Geraint Thomas: I must have done something wrong in a previous life

Bradley Wiggins: Olympic Games was like a junior race in the final