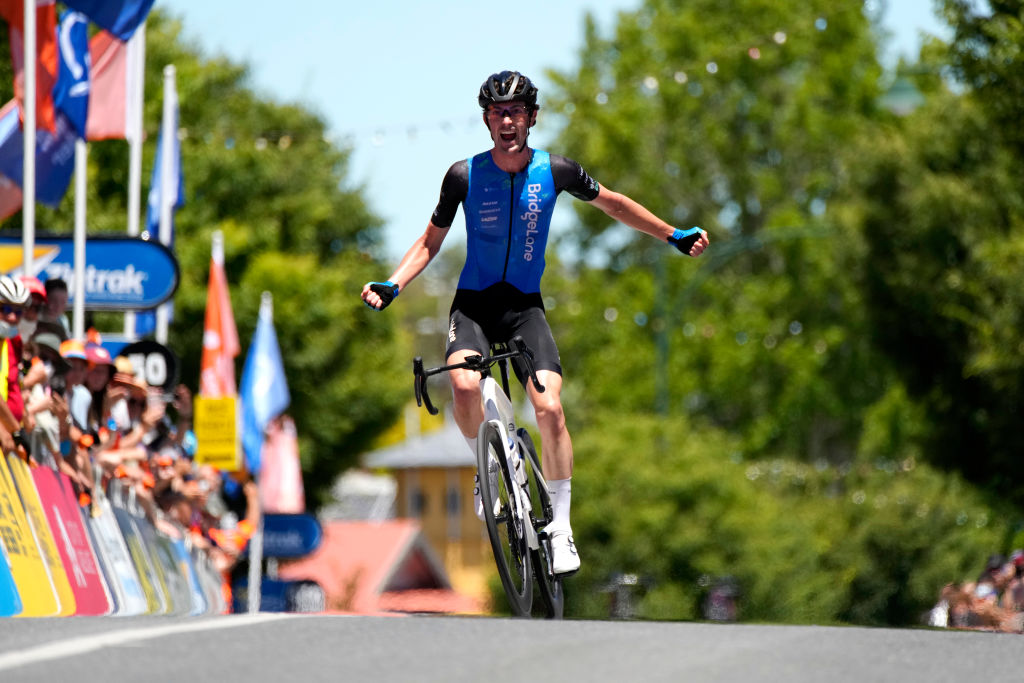 James Whelan (Team BridgeLane) won stage 1 of the men’s racing in the Santos Festival of Cycling, this time pulling off the solo victory that he had been chasing at the Australian Road National Championships earlier this month.

This time the rider, who has reluctantly stepped out of the WorldTour this season, easily held off the fierce chase by a group of 15 that included newly crowned Australian Champion Luke Plapp (Team Garmin Australia), Chris Harper (Villawood) and defending champion Luke Durbridge (BikeExchange-Jayco), who took the tour last year after carving out more than two minutes with a long-range solo effort on stage 1. The gap Whelan pulled out wasn’t quite as large, but at 1 minute and 23 seconds still provides a large buffer on the overall.

“It hasn’t quite sunk in yet,” Whelan said in the 7 livestream interview straight after the race. “Maybe when I’m on the podium it’ll make sense but far out what a race. I had the intention to try and do that but when you actually pull it off it’s a pretty special feeling.”

Winning the sprint from that chase group was U23 rider Matt Dinham, taking the top two steps for Team BridgeLane, while Ben Hill (CCS Cycling) came third, after also sweeping up the King of the Mountain points on the road.

The first stage on the road took in 114km and 1800m of climbing as it wound its ways from Stirling to Lobethal. While the Cuddle Creek climb provided the KOM less than halfway through the racing, there was no shortage of lumpy terrain closer to the line to help along the many splits and attacks.

The break attempts started early after the field left Stirling in the sunshine and building heat, with around 16 riders eventually managing to make it off and out to the front. Helping their cause was the mix of teams in the group, including all the major squads, from BikeExchange-Jayco, Team BridgeLane, Team Garmin Australia, Villawood, Inform TMX MAKE, Olivers and ARA Pro Racing Sunshine Coast. Most, though, had their most likely GC contenders still in the pack behind, with Giant Racing who had Brendan Johnston in the mix an exception.

Working together they built a lead that stretched out to around two minutes. At 65 kilometres to go the top points for the King of the Mountain were always going to go to a member of that break, and Hill clipped off the front with a concerted effort, signalling that if anyone wanted to take them from him they’d be in for a challenge.

When Team Garmin Australia’s break representative Zac Marriage dropped out of the move at around 55 kilometres to go teammates Richie Porte and Plapp looked intent on getting the group moving, and after they poured on the pace the splits and attacks just seemed to keep coming. Plapp and Rohan Dennis (Villawood) were in a group off the front and then it was Durbridge who shifted into gear pulling away with company that included Chris Harper (Villawood) and Whelan.

By the time the Durbridge group had joined, at about 40 kilometres to go, the gap between it and the peloton had slipped, giving plenty the incentive to try and bridge.

As more riders were trying to scramble to the front of the race the lead group was approaching the sprint point, with three riders clipping off the front and Johnston, eyeing the bonus seconds for GC, took the prize with Jean-Pierre van der Merwe (Team BridgeLane) second and Durbridge third. Having pulled a gap with the intermediate sprint Durbridge looked like he wanted to continue on for a moment but as his companions didn’t keep rolling, seemed to think better of it.

By 25km to go there were groups scattered all over the road, with at least four slotted in between the lead bunch and the group that most resembled a peloton. Plapp was off and riding in a group of five, so determined in his pursuit that he overshot a sharp left hand bend, but fortunately found a handy bit of run off space in the gravel.

At around 20km left Whelan decided it was his time and went with force, just before Plapp started breathing down the neck of the group he’d just left.

“When I heard that Luke Plapp was coming across again I was getting deja vu a little bit,” said Whelan, who was chased down by the 21 year old while solo in the final lap at Road Nationals, but I think tactically he had to do a lot of work to get to the position he was in and I had my teammates defending all the moves so I was pretty fortunate.”

As the kilometres ticked down, despite the chase force assembled behind, Whelan’s gap remained firm and it was clear he was going to take the stage victory in Lobethal, now it was just down to his rivals to try and reduce the gap so overall victory didn’t become out of reach too.

The group of 15 came over the line 1 minute and 23 seconds back, with Dinham’s second place not only putting him on the podium and in the young riders white jersey but also helping keep the bonus seconds that came with the position away from Whelan’s rivals. There were only two more riders finishing within two minutes on the stage, with the bulk of the field coming in around 5 minutes back, effectively ruling riders like former winners Porte and Dennis out of contention for the overall.

Preview: What you need to know about stage 20 of the 2022 Giro d’Italia