If you’re going to war you want Geraint Thomas with you, says Ellingworth 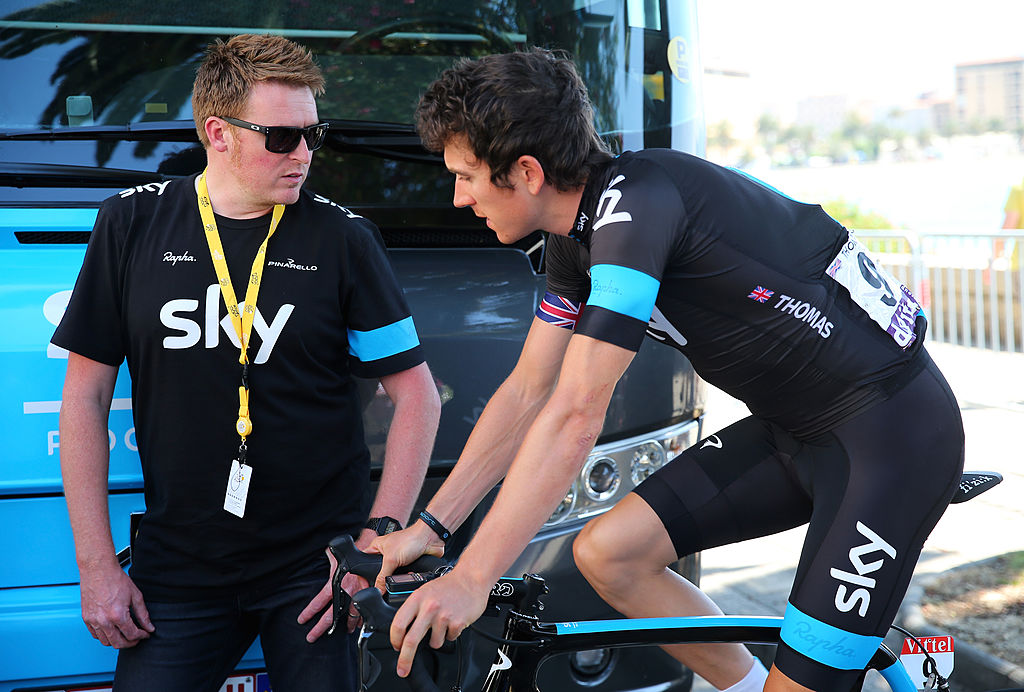 The contract situation around Geraint Thomas continues to rumble on, with the former Tour de France winner still not certain to remain at Ineos Grenadiers beyond this year.

The Welshman has a contract offer on the table from the team he joined in 2010 but he is said to have an alternative from Qhubeka-NextHash, who, despite their recent financial issues, are keen to recruit an experienced rider for the overall standings in week-long races and Grand Tours.

The most likely scenario would see Thomas remain at Ineos for at least one more year but the finer details of a contract extension have yet to be agreed.

Speaking at the Tour of Britain, long-term coach and manager Rod Ellingworth told Cyclingnews that negotiations were still ongoing but that Thomas still had a role to play at the team should he decide to stay.

“It’s not done yet, it’s not been finalized but it’s ongoing. I’m sure he has some offers and I’m sure he’s looking at what’s best for him,” Ellingworth told Cyclingnews.

“To be honest I’ve been at the Vuelta and then here so I’m not across it all but hopefully we’ll know soon. All I can say is that negotiations are ongoing.”

Thomas endured a disappointing Tour de France, with his single Grand Tour in 2021 beset by crashes and bad luck. Until that point he had appeared in fine form with a string of impressive and consistent results. After a slow build-up through February and March, the 35-year-old was third in the Volta a Catalunya and followed that up with the overall win in the Tour de Romandie and a stage win and third overall in the Critérium du Dauphiné.

With Egan Bernal winning the Giro d’Italia this year, Richard Carapaz finishing third at the Tour, and Ineos Grenadiers looking to develop younger talent over the coming years, there are legitimate questions as to Thomas’ role on the team should he stay. Ellingworth believes that there’s more to the Welshman than just competing for Grand Tour honours and that his experience and value to the team over the last decade are considerable strengths.

“At the end of the day, he’s won Romandie this year and a stage in the Dauphiné. We know that Geraint can still perform well and he’s one of those guys who if you’re going to war then you want to take him with you,” Ellingworth said.

“He’s a great person to have on the team in that sense. He’s proven in the past that he’s not just a good winner but also a good teammate. He can play a variety of roles and of course if he stays he’s a bit of a team ambassador. He is this team, in a way.”

When asked if Thomas would have a Grand Tour leadership role in 2022, should a contract be signed, Ellingworth said: “At the end of the day, it’s like with any of the guys on the team. We have multiple riders who have won Grand Tours so, as I’ve always said, it’s about putting the best rider on the line with the best team. It doesn’t matter who it is.”

Ellingworth would not be drawn on any other transfer targets or rumours but it’s understood that Elia Viviani is on his way back to the team, four years after departing for pastures new. The 32-year-old has signed a three-year deal and will move across from Cofidis.

Another rider who has been heavily linked to the team is Magnus Sheffield. The 19-year-old recently announced that he had left Rally Cycling with immediate effect. He will compete in the U23 World Championships later this month, while Gianni Moscon will leave the team alongside several others including Owain Doull, Leonardo Basso, Rohan Dennis, Michal Golas, and Cameron Wurth.

The team have already announced that Luke Plapp and Ben Tulett will join the team full-time at the start of 2022.

Preview: What you need to know about stage 11 of the 2022 Giro d’Italia

Five questions for the second week of the Giro d’Italia