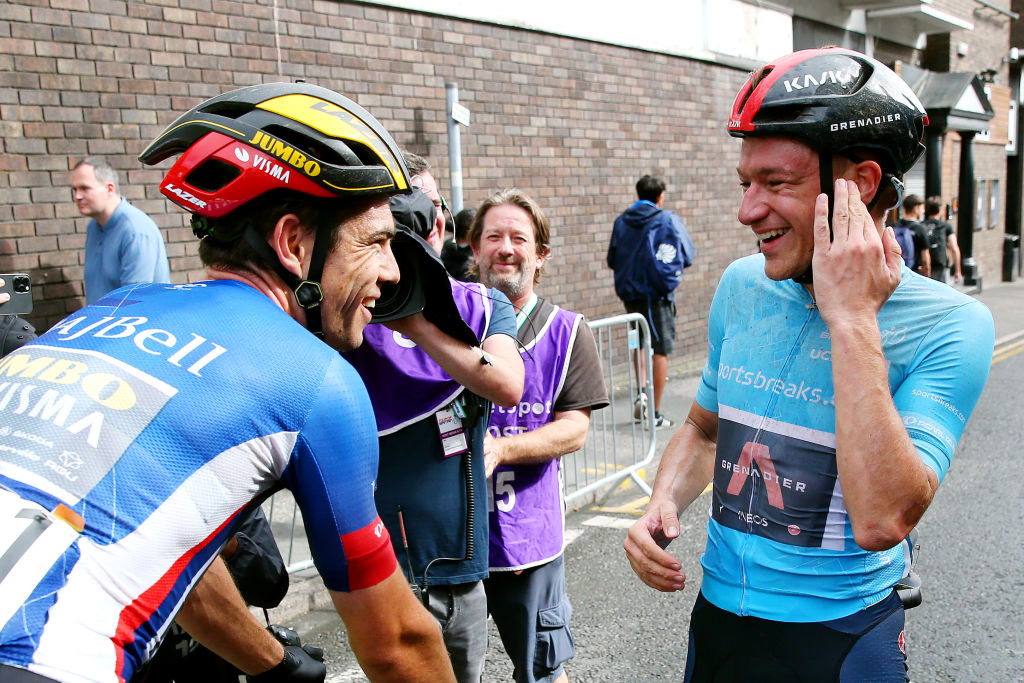 Ethan Hayter (Ineos Grenadiers) survived a late scare on stage 5, capitalising on a split in the peloton to win a close-fought sprint and reclaim the race lead at the Tour of Britain.

A fall for Hayter’s teammate Owain Doull on the final corner meant a number of sprinters were caught out and distanced but Hayter, who came into the stage just two seconds behind race leader Wout van Aert (Jumbo-Visma), narrowly avoided the fall and then made use of an excellent final leadout from Michal Kwiatkowski. Hayter took the win and, as a result of bonus seconds, now leads van Aert by eight seconds with three days remaining in the race.

“The hard work was done before the last kilometre and the team were amazing. With around 20km to go we were there or thereabouts and out of trouble. Then in the last 10km it got twisty and technical but we were in the perfect place really. On the last corner with around 700m to go a couple of guys came up the inside, and I knew that I just had to get around it safely. I didn’t want to be at the front either because it was still quite a long way to go,” Hayter said after taking his eighth win of a hugely successful breakout season.

“I saw that Doull started drifting, then he crashed and his bike started drifting as well. I just squeezed between the bike and the barriers. Then I screamed on the radio for Kwiatkowski to go flat out. I just put it in my biggest gear, went for it, and it was enough.”

Hayter told Cyclingnews at the end of stage 4, having just lost the overall lead in the race to van Aert on the summit finish of Great Orme, that stage 5 provided him with home ground advantage. He currently lives and trains on the roads used during stage 5 therefore the victory took on a special significance for him.

“To win this Manchester stage, where I know so much of the roads, it’s really nice. It’s the Tour of Britain and it’s amazing to win as a British rider. I really owe it to my teammates.”

With three stages to go in the race, the overall complexion is far from settled. The race lead has changed every day so far, plus at least two of the remaining days are unlikely to end in a bunch sprint. For Hayter and Ineos Grenadiers the plan will be to measure their efforts and control their main rivals, while also hunting for bonus seconds in a bid to create a buffer.

“There’s a lot of hard racing to go and it might not come down to time bonuses in the end. It might come down to some big gaps tomorrow or the days after. It’s going to be interesting and we’ll do what we can.”

Preview: What you need to know about stage 20 of the 2022 Giro d’Italia