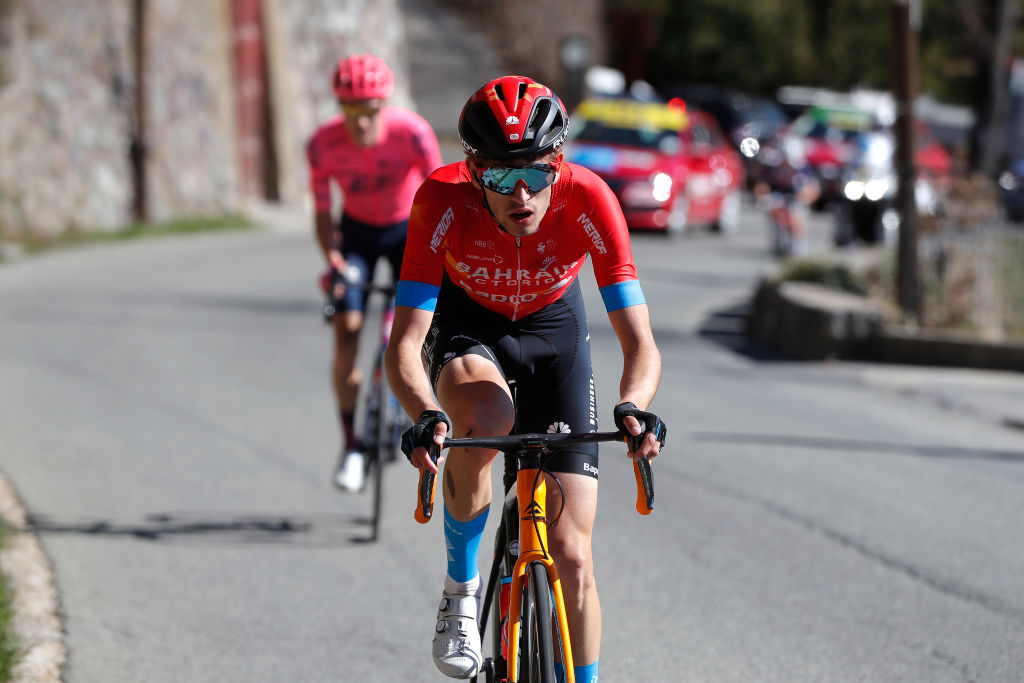 There was another breakaway winner on stage 6 of the Giro d’Italia, as Gino Mäder (Bahrain Victorious) triumphed atop the Colle San Giacomo, but also more GC action, with Attila Valter (Groupama-FDJ) taking the pink jersey and Egan Bernal (Ineos Grenadiers) issuing a statement of intent.

The final climb, measuring 15.5km at 6.1 per cent, was always likely to have an impact, but the stage had already burst into life in the wet and windy conditions between a pair of lesser mid-race climbs.

Race leader Alessandro De Marchi (Israel Start-Up Nation) was caught out when Ineos attacked en masse and split the bunch on the plateau, and the Italian went on to lose eight minutes even before the final ascent. At the finish, he handed the jersey over to his breakaway companion from Tuesday, 22-year-old Valter, who started the day fourth overall and placed a remarkable 12th on the stage.

Valter finished in elite company alongside Simon Yates (BikeExchange), Aleksandr Vlasov (Astana-Premier Tech) and Hugh Carthy (EF Education-Nippo), but those three were dealt a 17-second blow as Bernal issued a volley of attacks in the final 2km. Only Remco Evenepoel (Deceuninck-QuickStep), Giulio Ciccone (Trek-Segafredo), and Dan Martin (Israel Start-Up Nation) were able to follow the Colombian’s second acceleration, and he still had enough in the tank to sprint for second place on the stage, with Martin taking third.

The day’s honours, however, belonged to Mäder, who tasted redemption on a couple of fronts. First of all, it was the perfect way to bounce back after Bahrain Victorious had lost their leader Mikel Landa to a crash the previous afternoon. They appeared anything but rudderless on Thursday, as Matej Mohorič produced unsung heroics to first propel Mäder into the break, then split the break on the descent from that pair of mid-race climbs, and finally set the pace on the lower slopes of the final climb.

By the time he pulled aside, Mäder had just Bauke Mollema (Trek-Segafredo) and Dario Cataldo (Movistar) left for company, and he rode with them until launching his big attack 3.3km from the summit. He was quickly and cleanly away, but Bernal was about to light the touchpaper behind, and his one-minute advantage came under major threat.

It looked like he might suffer the same agonizing fate as at Paris-Nice earlier this year when Primoz Roglic flew past him in the final metres of the penultimate stage, but this time he hung on by 12 seconds to complete the redemption tale. It had been such an exacting day in yet more sodden conditions that he could barely rise from the saddle to celebrate, but he nevertheless savoured his moment.

“Yesterday was such a sad day, and today we just said we’re going to ride in honour of Mikel’s lost Giro,” Mäder said.

“It’s such a nice feeling after Paris-Nice. As soon as I was alone as the last survivor of the break, all I could think of was Paris-Nice. There was that doubt in my head all the way to the last 100 metres, and then it was such a sweet feeling.”

Bernal then took second place on the stage, helping himself to six bonus seconds, while Martin claimed four bonus seconds for third. Evenepoel finished alongside them, but Ciccone lost two seconds in the final dash for the line.

Damiano Caruso (Bahrain Victorious), Marc Soler (Movistar), and Daniel Martinez (Ineos) all held their own and finished just ahead of the group containing Valter, Yates, Carthy, and Vlasov, who finished 17 seconds down on Bernal.

Valter now leads the race by 11 seconds over Evenepoel, with Bernal third at 16 seconds, and Vlasov fourth at 24 seconds. Louis Vervaeke (Alpecin-Fenix), also with Valter in that stage 4 breakaway, kept himself in the top-five by placing 22nd on the stage, while Carthy, Caruso, Ciccone, Martin, and Yates round out the top-10 all still within 49 seconds of the race lead.

“I could cry, I’m so happy. It’s just incredible for me,” Valter said.

“It’s good to make jokes in the morning but to really believe it is another story. I cannot be more surprised and more happy. I was planning to do it. I knew I had the good climbing legs this Giro to be better than the first five riders. I just had to hang onto the best climbers and I was really motivated to do it. Of course, the motivation gives extra power. I just hope to enjoy this jersey with the team as much as possible.”

What do team sponsors of the men’s WorldTour actually do?