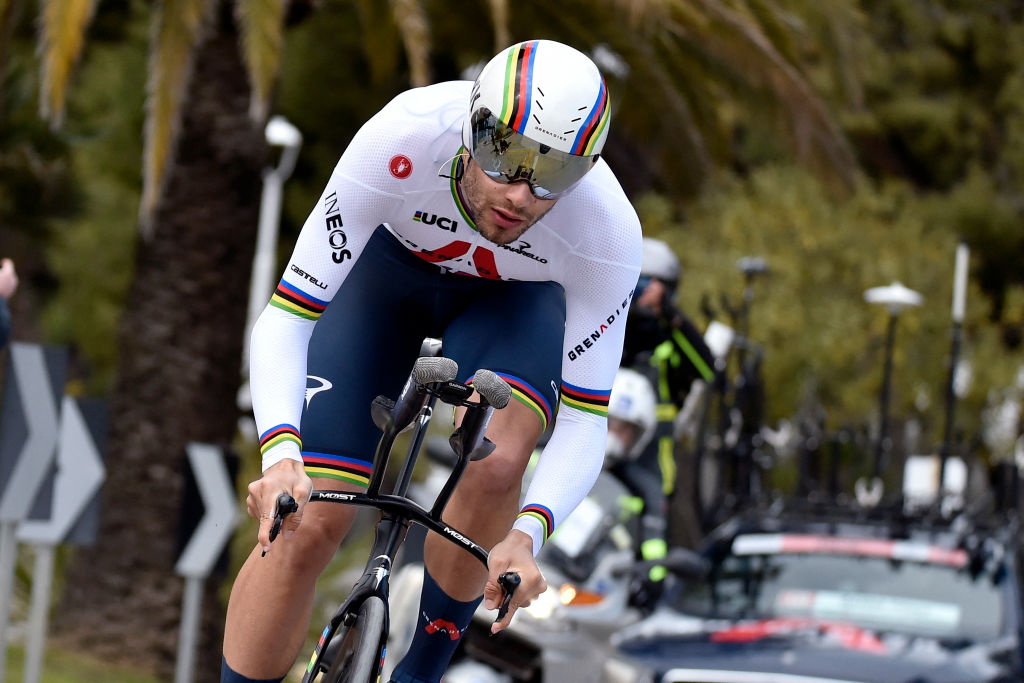 Filippo Ganna was widely expected to extend his run of time trial victories to nine on Tuesday’s final stage of Tirreno-Adriatico, but the Italian could only gracefully accept defeat after being beaten by Wout Van Aert (Jumbo-Visma) and Stefan Küng (Groupama-FDJ) in the 10.1 kilometres out-and-back seafront time trial in San Benedetto del Tronto.

Ganna had not lost a time trial since the 2020 Vuelta a San Juan last January. In the last 12 months he had won eight time trials, including the Italian National Championships, the World Championships in Imola and all three time trials at the Giro d’Italia. This year he won at the Etoile de Bessèges and the UAE Tour, and was the big favourite for a second consecutive time trial win at Tirreno-Adriatico.

Küng and Van Aert were considered serious rivals but it was widely thought that Van Aert would not be a contender after the fatigue of fighting for overall victory. Küng is the current European time trial champion but Ganna had beaten him in Imola and in the 2019 BinckBank Tour.

Ganna put out big watts as usual, pushing a gear of 58×13, but lacked spark and the speed to win. In the end, Van Aert beat him by 11 seconds and Küng by six.

After the race, Ganna conceded that he is human after all.

“I showed that I’m human, not a robot, and that I can lose the race. My numbers were good, but every day is different,” he said.

Ganna refused to make any excuses that the wind – which blew against the riders on the way back to the finish – may have eased by the time Van Aert started his time trial later in the afternoon.

Both Küng and Van Aert had gained four seconds at the first intermediate time check after just 4.4km, while the Belgian added another seven seconds in the closing part of the stage.

“I think the wind was the same for everyone,” Ganna said. “I immediately felt my legs weren’t great, I felt it. I managed to pull back something but now we can only think to the next chance.”

Ganna worked hard for Ineos Grenadiers during Tirreno-Adriatico, assisting Egan Bernal to a fourth place overall at 4:13 back, while Geraint Thomas ended up in 24th at 17:12.

“I’m happier to work hard for the team for a week than win another time trial,” Ganna said. “The guys gave 100 per cent, so why should we be disappointed. We’ll have more chances to fight back. I’m not sad. Every race is different. There is always someone who can be stronger.”

Ganna is expected to be part of the Ineos Grenadiers lineup for Milan-San Remo but he will not ride the Belgian Classics this year, despite his liking of the pavé and success in Paris-Roubaix Espoirs back in 2016.

Instead he will return to the track for some key training in preparation for the team pursuit and time trial at the Tokyo Olympic Games before training at altitude for the Giro d’Italia.