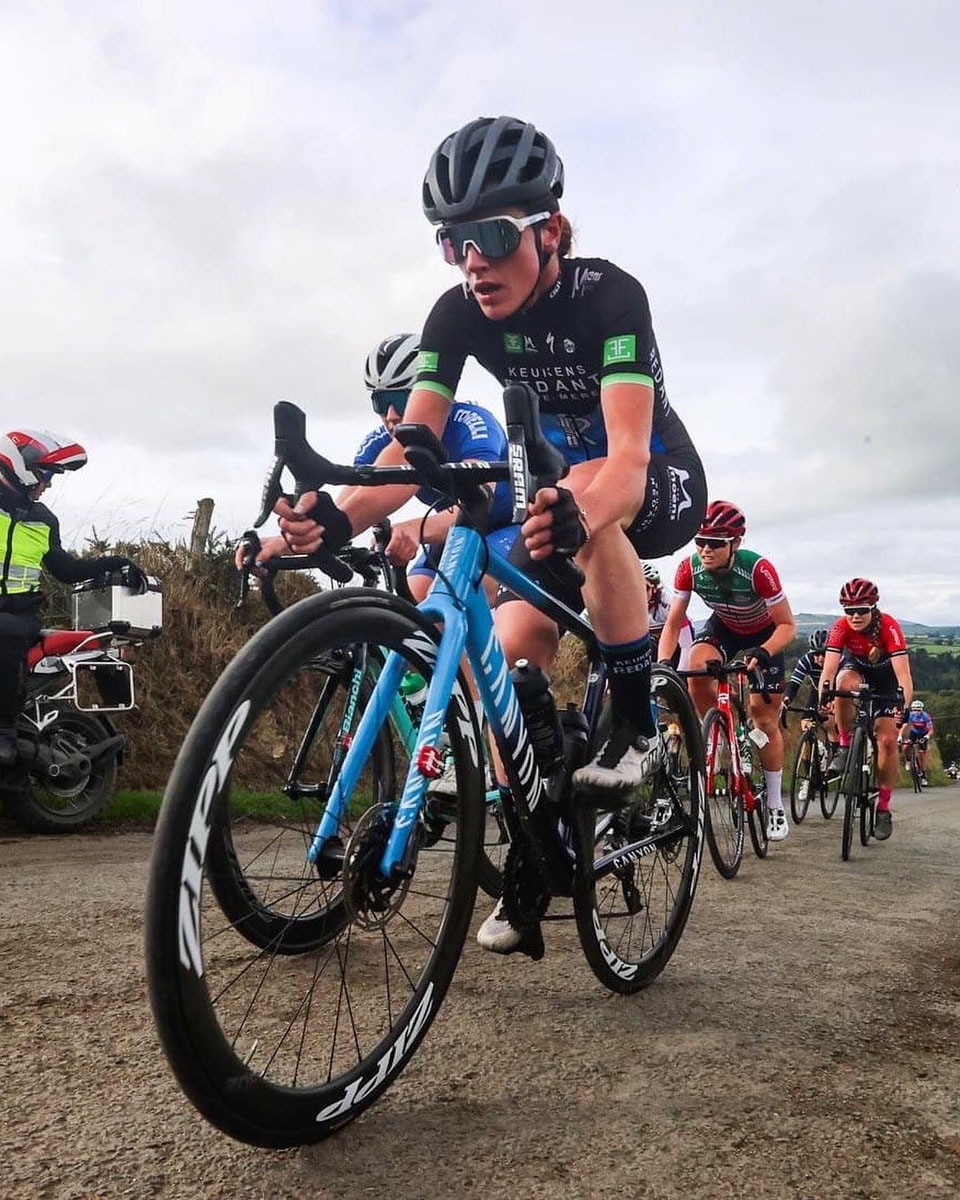 Recently crowned Irish road champion Imogen Cotter has signed a one-year contract with the Plantur-Pura team for 2022. The move represents a major stepping stone in the Irish rider’s career after she took up cycling just three years ago and rose through the ranks via Belgian domestic racing and e-sports.

Cotter rode as part of Movistar’s e-racing team in 2021 but also enjoyed a season racing in Belgium while she held down part-time jobs. Her one-year deal with the Plantur-Pura squad will allow her to focus entirely on her racing career for the first time, and the 28-year-old is highly motivated to capitalise on the opportunity she has fought so hard for.

“My long-term goal is to go to the WorldTour but I entered cycling very late. I started road racing when I was 25, and I’m 28 now. I’m no spring chicken but I feel like I have a lot of room to progress because I’ve only been cycling for three years,” Cotter told Cyclingnews at the recent Rouleur Live event in London.

“2020 was a write-off because of COVID, and in 2019 I broke my arm half-way through the year, so I’ve had three years where I had road racing, but not completely. I just want 2022 to be the year that things go boom and really come together. I want to hit the ground running, and I’m not holding anything back because I’ve sacrificed so much for cycling. I’m getting to do the races I want to do, I’m getting a paid contract, which is something that I’ve never had.”

Cotter’s late arrival to the elite ranks comes after a spell in running. She took up cycling late but with little infrastructure in place to help most female riders move to mainland Europe to chase their dreams, she was required to juggle full-time training and racing with paying the bills.

“I moved to Belgium, and I got part-time jobs earlier in my career. I had one in a bakery where I just put chocolate decorations on cakes at a conveyor belt for eight hours a day.  Then I got a job working with the post which meant starting at four in the morning. That gave me more time to train because I’d be finished by the afternoon but it was exhausting. It was a disaster. For the last year, I’ve not had a lot of money but I’ve done some work on social media with advertising for companies. That’s given me some breathing space but I’ve also done some coaching and that’s helped, even if the work has been small. I don’t have a lavish lifestyle.”

The contract with Plantur-Pura came about through her racing results and her hard work. Team director Heidi Van De Vijver noticed Cotter and her aggressive racing style and recognised that despite limited experience the Irish champion had the passion and the talent. She just needed the opportunity to show it.

“Heidi had been keeping an eye on me and my results when I was riding for a Belgian club team and she invited for me to ride as a stagiaire at some of the WorldTour events because she liked the way that I raced.

“This year I’ve been riding on Canyon bikes because I’ve been racing for the Movistar E-Team. They were hoping to set up a gravel team but that plan fell through and I was going to sign with another team for next year but when Canyon heard that they put me back in contact with Heidi and she wanted me on the team. It all worked out well for me.”

Cotter’s 2022 programme has yet to be finalised and she’s yet to meet her new teammates as she enjoys her off-season before training ramps up again in the coming weeks. It is likely that she will combine racing on the road with an e-racing schedule but overall the move signifies a huge step up in terms of competition and class.

“It’s good for me because it will be similar to what I’ve been doing with Movistar this year in that I’ve done the e-racing with Movistar and I’ve done gravel with them and road racing with my club team. Next year I’ll do road racing with Plantur-Pura and they’re hoping to set me up with some gravel racing and they do a lot with e-racing because they have the men’s Zwift Academy. I’m hoping that I’ll be able to do the same sort of programme that I had this year.

“My road racing will be at a high level though. At the moment, with my club team in Belgium, we can’t do WorldTour races but now I can. I feel ready for the step up, I just want to do it. I want it to happen with the guidance of someone like Heidi and the guys who run the team. The club team that I’m with has been brilliant because they’ve given me the opportunity to progress, make mistakes and I’ve not had a lot of pressure.  Now that I’m moving up I’ll have a DS who is super experienced at that level and it will just teach me I need to know as a cyclist.”

Rather than seeing the move as a daunting experience, Cotter is fully embracing the challenge and is relishing the chance to compete with the very best athletes in the Women’s WorldTour calendar.

Cotter has yet to see her Irish national champion’s kit that her new squad is set to produce but she is excited about representing her nation every time she races or trains in 2022. Cotter came close, several times in fact, to represent Ireland in running but missed out due to injury. For next season, she will have the chance to show off her national championships kit in every event and training ride.

“I’ve not seen it yet. For me, when I first started, I was a runner, and my dream was to always wear the Irish vest. I got selected on two occasions and both times I got injured. Then the same thing happened in cycling. It had been my dream to represent Ireland and I’d been asked three times and every time I got asked I was injured. When I finally got to wear the national kit I was emotional about it. I couldn’t believe it, and it was fantastic. Now every time that I race, I’ll be representing Ireland. That for me is a dream, and I can’t wait. It will be plastered all over social media, and once get the kit you’ll see it everywhere. I’ll be unbearable.”