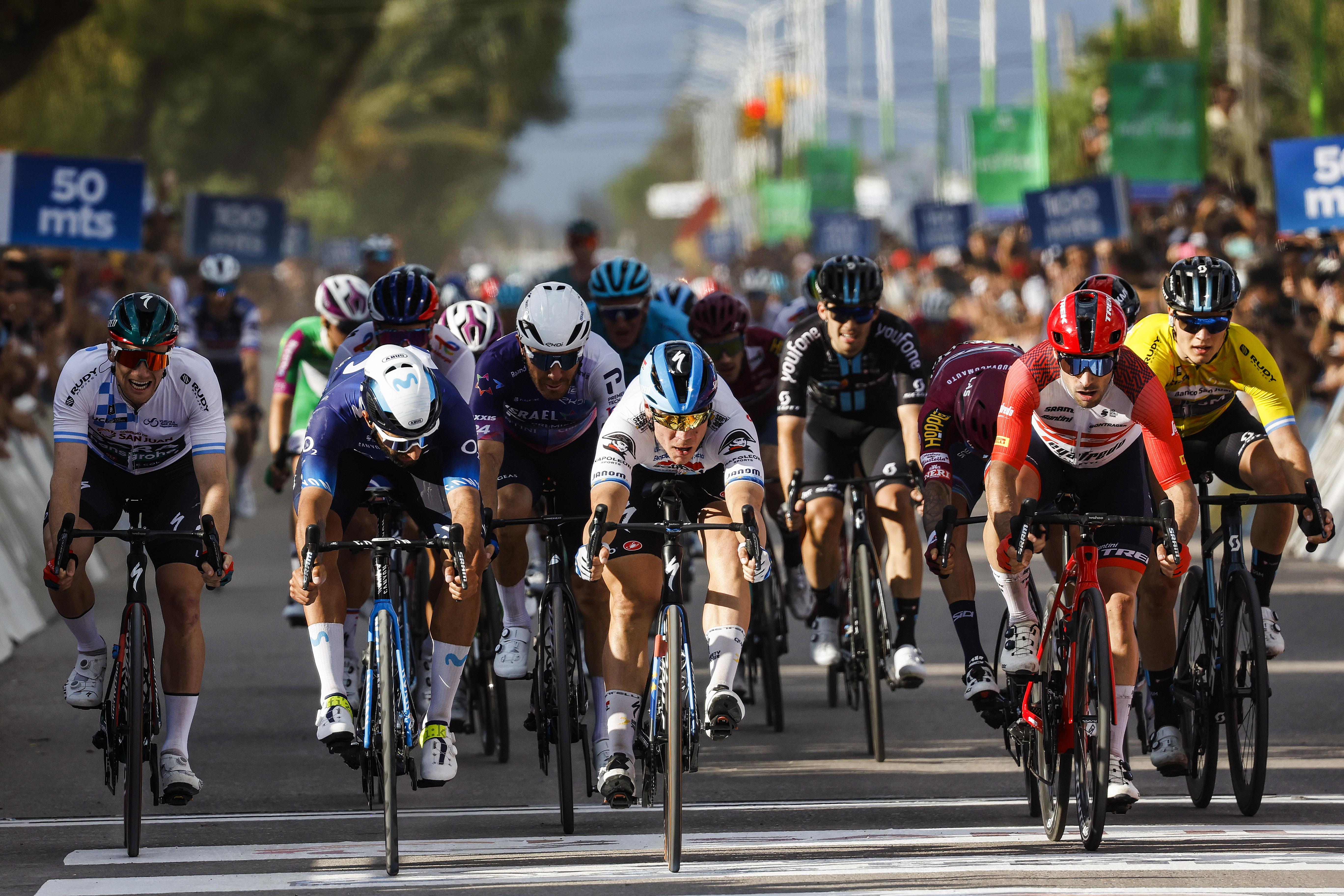 Fabio Jakobsen (Soudal-Quickstep) scored his first win of the 2023 season, jetting out of a reduced bunch sprint to snatch the stage over Fernando Gaviria (Movistar) and Jon Aberasturi (Trek-Segafredo) in Jáchal.

Jakobsen earned his position at the front courtesy of world champion Remco Evenepoel, who led the bunch through the last turn where a huge split opened up behind the first 20 riders.

Stage 1 winner Sam Bennett (Bora-Hansgrohe) was late to the party in fourth, and although he was outside the time bonuses, he continues as race leader thanks to his superior finish relative to Jakobsen’s 58th on stage 1.

Jakobsen is now second overall and tied on time Bennett, while Gaviria is in third at four seconds. In his post-stage interview, the rider who nearled died in a crash in 2020, explained why he was so far back on the opening stage sprint.

“I’m happy, especially after yesterday. Yesterday’s final was really dangerous. But I spoke to the organization yesterday evening and they promised they would make a safe final 5k and they succeeded. I’m happy I could win,” said Jakobsen.

The run-in to the final kilometre on the opening stage was riddled with parked cars and, at the kilometre to go banner, the road split around a traffic island, rejoined and split again, wreaking havoc.

Michael Mørkøv sprinted to second on Sunday after Jakobsen said ‘peace, out’ but was back in his traditional role today.

“Michael [Morkov], Pieter [Serry] and Jan [Hirt] did a great job controlling the race, and I think I’ve got one of the fastest lead-outs maybe ever, with Remco, Yves [Lampaert] and Mørkøv so I’m really proud of them. Without them, I could never win. I really need my teammates. They dropped me off in a perfect sprint position. It was a close battle with Fernando – he’s won a lot of races in San Juan so he’s obviously the man to beat.”

After Sunday’s opening act in and around San Juan, the peloton faced a lengthy transfer from the provincial capital to the tranquillity of San Agustín de Valle Fértil for the start of stage 2, which was itself the longest leg of the race at a shade over 200km. The opening 80km or so of the course were almost entirely uphill, climbing to an altitude of 1500m through the haunting rock formations of the Parque Provincial Ischigualasto, dubbed locally as the ‘valley of the moon.’

Ischigualasto, incidentally, is the Diaguita word for ‘land without life,’ but here it was the site of a vivacious first hour of racing that saw a dozen riders forge clear of the peloton. Óscar Sevilla (Medellín-EPM), third overall in 2020, was the obvious dangerman in the group, but his presence didn’t prevent the escapees from amassing a sizeable advantage on the peloton on the gradual grind towards the stage’s highest point.

The 46-year-old Sevilla had Alessandro Santaromita (Green Project-Bardiani), Stefano Gandin (Corratec) and Tomas Contte (Argentina) for company in the group, and the twelve leaders would stretch their advantage out to five minutes after 35km before the peloton felt moved to pare the gap down to more manageable dimensions.

Contte led the group over the summit of the climb after 80km with a buffer just north of three minutes, but the long and fast drop over the other side saw the sprinters’ teams begin to make more significant inroads, with the Bora-Hansgrohe squad of race leader Sam Bennett prominent alongside Fabio Jakobsen’s (and Remco Evenepoel’s) Soudal-QuickStep guard.

By the time the road began to climb again on the approach to the second intermediate sprint at Huaco, it was already apparent that Sevilla and company’s sortie was not going to deny the fast men. The leaders stuck resolutely to their task despite the intensity of the pursuit behind them, but they were swept up shortly after they swooped past the old mill in Huaco. Back in the bunch, meanwhile, Sam Welsford (DSM) was a faller, and although he quickly remounted, the Australian’s injuries would prevent him from contesting the inevitable bunch sprint at day’s end.

Manuele Tarozzi (Green Project-Bardiani) tried to sneak away and foil the sprinters in the closing stages but the peloton, spread wide across the road, only prolonged his suffering before teams began to set up their lead-outs. In the final few kilometres there were a few fireworks that quickly fizzled.

Soudal-Quickstep as usual waited until the final two kilometres to take to the front, and when they did they used Evenepoel to give Jakobsen a solid position for the victory.