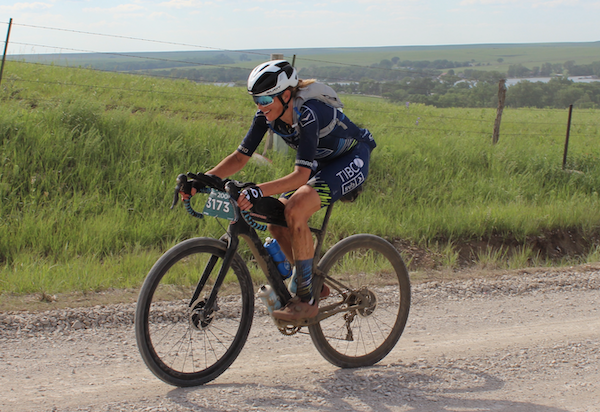 “I’ve given birth to a child. This was the first race that was comparable to having a kid,” Newsom said following the event, which ran through the Flint Hills of Kansas on Saturday.

Newsom arrived fresh from a win at Gravel Locos in May, and among a short list of favourites that also included De Crescenzo and Rockwell, along with Alison Tetrick, Rebecca Fahringer, Oliva Dillon, Shayna Powless, and Andrea Dvorak.

“I am enjoying the gravel scene so much, and with my current form being quite good, I thought why not?” Newsom said ahead of the event. “Why not challenge myself in a way that I have not done yet, and see what my body can do!”

At the first checkpoint, 68.3 miles into the 206.8-mile contest, De Crescenzo was riding alongside teammate Flavia Oliveira, with a four-minute advantage over Newsom and Whitney Allison, with Shayna Powless and Rockwell another two minutes back.

As the race unfolded, however, De Crescenzo and Newsom ended up riding together, and passing Oliveira. De Crescenzo then took the solo lead after the second checkpoint at mile 155.8, while Rockwell moved up to second place, leaving Newsom to ride in for third at the finish line in Emporia.

It was Newsom’s first experience at one of the most infamously challenging gravel races in the US, and while she said it was really tough, she would also come back to race it again.

“I was not expecting some of it and thought, ‘wow, they are really sending us down this – crazy.’

“If you had shown me a picture of that and said, ‘oh, you’re going down that,’ I don’t know if I would have come. But, racing it – I realised I could do it – and it was pretty cool. I enjoyed it a lot. I want to come back and do better at the technical stuff.

From Peter Sagan to Sam Bennett: Your guide to the biggest transfers of the season