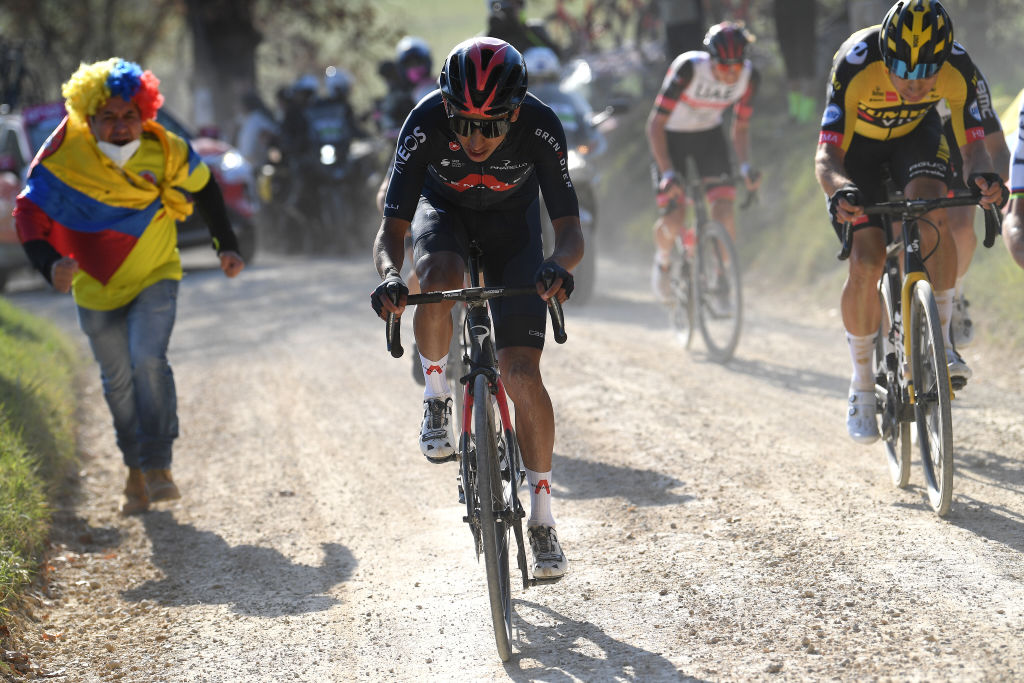 Bernal was one of the strongest in the race, but the former Tour de France winner was one of only two riders able to chase down and catch onto Van der Poel’s rear wheel when the Alpecin-Fenix rider attacked for the first time with 24km remaining in the race.

The trio traded turns on the front in a bid to keep the defending champion Wout Van Aert (Jumbo-Visma) and a chase group at bay, but as they started the final short ascent to the finish it was clear that Van der Poel’s strength and aggression weren’t to be matched.

Bernal slipped back first while Alaphilippe fought to at least finish second.

For Bernal, the result still represented a significant moment in his career, and not least his 2021 season, as he looked to embark on an injury-free campaign and Tour de France challenge.

The Ineos Grenadiers rider quit the Tour de France in the final week of last year’s race due to a back injury, and after a long winter of rehabilitation he has found an impressive level of early-season form – even if he has admitted that his back problems are an ongoing problem.

The 24-year-old was third in the Tour de la Provence in February and then finished second in the Trofeo Laigueglia on Wednesday with an aggressive ride.

“Yes, I’m a bit surprised to be in the top three because I’m not a specialist in the one-day races so to get on the podium with Mathieu and Julian is a big honour for me. I’m really surprised and motivated for the next goals,” Bernal said at the finish in Siena.

The Ineos Grenadiers rider admitted that the strongest rider won and that his lack of Classics experience was an issue. He lacked the explosive power of Van der Poel and Alaphillipe on the dirt roads but his climbing ability was enough to at least draw him into contention.

“I’m riding well. To finish on the podium with these two guys is an honour for me and I have to be happy with that. I’m not a Classics specialist and so it’s harder for me. I want to enjoy this podium place and then look forward to my big, big goals. It was hard for me to win against those two.

“I wanted to get over the final sectors of dirt road and then play my cards. But it was all about what you had left in your legs. The strongest rider won today. We’re happy with this place on the podium because I was up there with Van der Poel and the world champion, they’re both great riders.”

Bernal wasn’t the only rider on his team to impress, with Tom Pidcock taking fifth on the line his strong start to racing in the WorldTour continued.

“It was good fun. It was a hard day out. I’m quite pleased but I punctured, got back in and it was pretty good. Egan finished on the podium. We were coming to win but I was happy with how I went,” Pidcock said.

“I was thinking that it was quite cool, that the riders in the break were the six biggest riders in the world, and I was there too. That was pretty cool. I just didn’t have the legs to go any faster. I can’t complain. A few more races and miles in the legs and I’ll be there soon.”

Ride the white roads of Siena with

Amstel Gold Race 2021: Everything you need to know

Patent Patrol: What does a Shimano GRX hydro junction do?

Philipsen hungry for more at Tour of Turkey after Scheldeprijs triumph