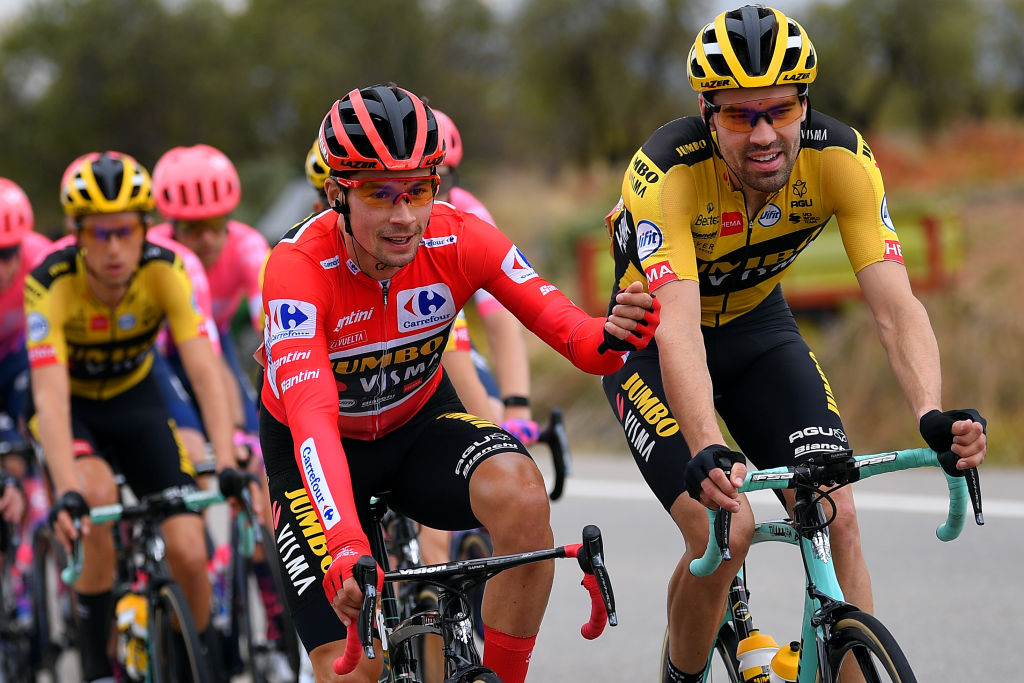 Jumbo-Visma have denied that Tom Dumoulin or Primož Roglič have been implicated in the Aderlass doping scandal, after their photos were used as part of the investigation.

German newspaper Süddeutsche Zeitung reported on Tuesday that the team’s two star riders appeared in a portfolio of ’30 to 40′ photos presented to those being questioned, in an effort to ascertain who might be part of the doping ring around Dr Mark Schmidt.

Similarly, both riders insisted they had never had contact with Schmidt or any of his associates.

Neither Dumoulin nor Roglič were aware of why their faces were included in the investigation, while the public prosecutor does not reveal the motives behind its questioning.

This may have arisen as a result of testimony from Georg Preidler, who was banned from cycling for four years and received a suspended prison sentence after confessing to being part of the doping ring.

According to Süddeutsche Zeitung, the Austrian voiced concerns to investigators over both Dumoulin, who he rode with at Team Sunweb from 2013 to 2017, and Roglič.

The newspaper reports that Preidler’s written confession contained an insinuation over a 2017 training camp to which he was not allowed to attend, despite wanting to do so at his own expense. He reportedly wondered how the riders involved had all hit such high form, with Dumoulin going on to win the Giro d’Italia soon after.

Sunweb have yet to respond to a request to comment from Cyclingnews but told Süddeutsche Zeitung there was no base to the insinuation, adding: “The top priority for Georg back then was that he focused on the goals of the team.”

As for Roglič, Preidler’s confession also makes reference to his career change from international ski jumper to professional cyclist, as well as the rise in Slovenian success in recent years.

“I never understood how you can go from ski jumper to winner on a three-week tour,” he reportedly stated, although the term ‘presumption’ was added in brackets.

Slovenians Borut Bozic and Kristijan Koren have both been banned as part of Operation Aderlass, while Milan Erzen, manager of the Bahrain McLaren team and former coach of Roglič at the Adria team, has denied repeated links to Mark Schmidt.

Other riders who have been implicated in the investigation are Stefan Denifl, Kristijan Durasek, Alessandro Petacchi, and Danilo Hondo.

Operation Aderlass – or Operation ‘bloodletting’ – burst into the public consciousness in February 2019 after Austrian police raided the Nordic World Ski Championships, with German police later raiding Schmidt’s clinic in Erfurt. Blood bags and other doping equipment were found on the premises of the former doctor for the Gerolsteiner and Milram teams.

Tour of the Alps returns with 12 WorldTour teams set to attend – VeloNews.com

AASQ #102: Prologo help you choose the right saddle with BMI and hip flexibility