De Rosa’s long-running, rim brake TT03 time trial bike gets a lighter, stiffer, and all-around faster disc brake update in the new TT03 Disk. The new disc brake version has been a bit of an open secret since its limited racing debut early this season with Cofidis starting at the Tour of Romandie. But now De Rosa has unveiled the full TT03 Disk details, and that it will completely replace the outgoing rim brake version.

In designing a new disc brake version to replace their rim brake TT bike, De Rosa improved on three performance characteristics of the previous carbon time trial bike: maximum aerodynamics, reduced weight, and greater stiffness. Approved by eth UCI for racing back in February, the sleek new TT03 Disk bike’s overall profile looks quite similar to the outgoing TT03, so it really came down to refined details to make all of those gains… 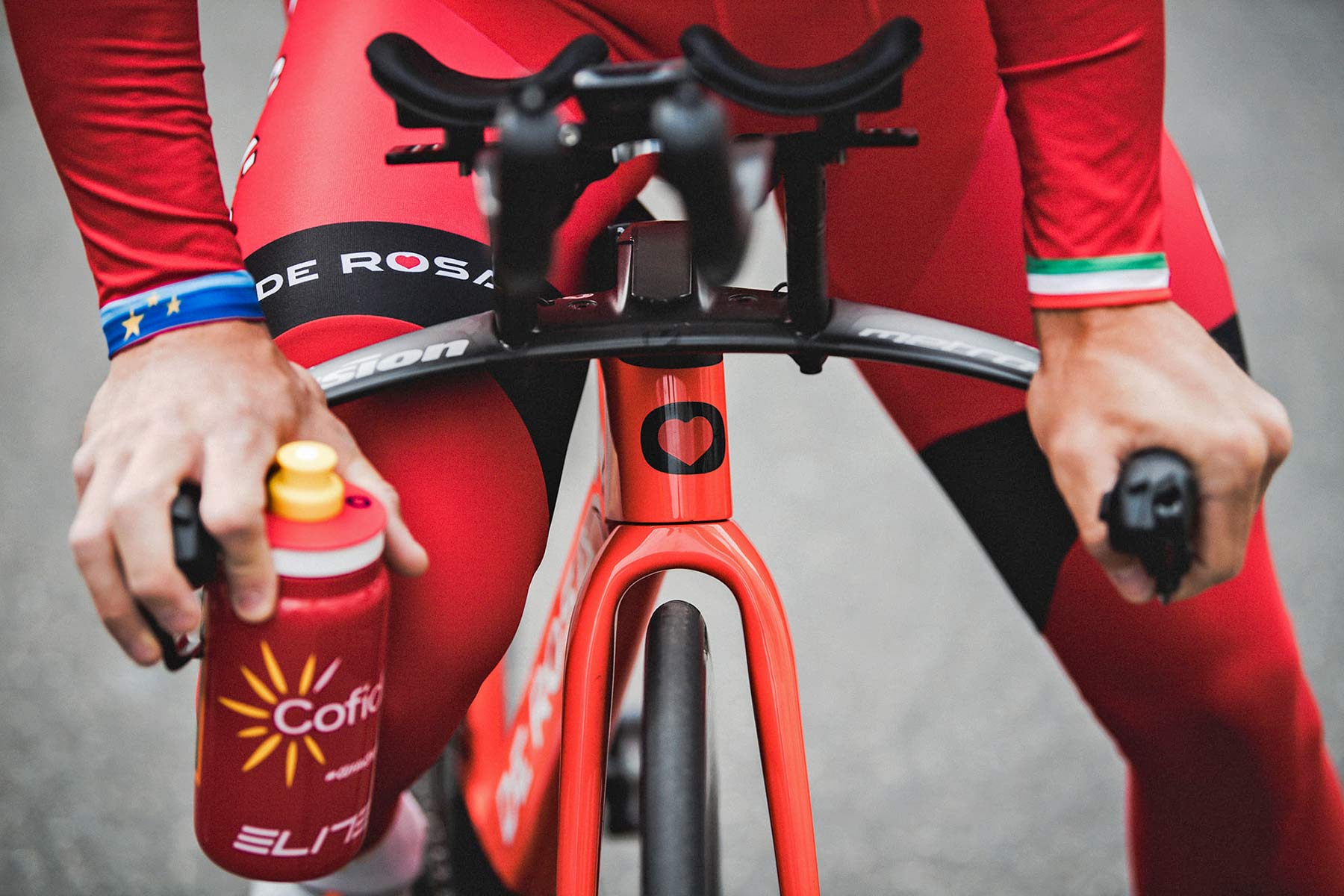 The front end of the new TT bike is much cleaner with the removal of a rim brake from the fork, allowing De Rosa to open the crown much wider to allow free flow of air around the spinning front wheel. This new De Rosa JW fork design also lead to the removal of the old transition shaping into the downtube, now replaced by much flatter smooth sides that stretch from the narrow headtube back along the top & down tubes. 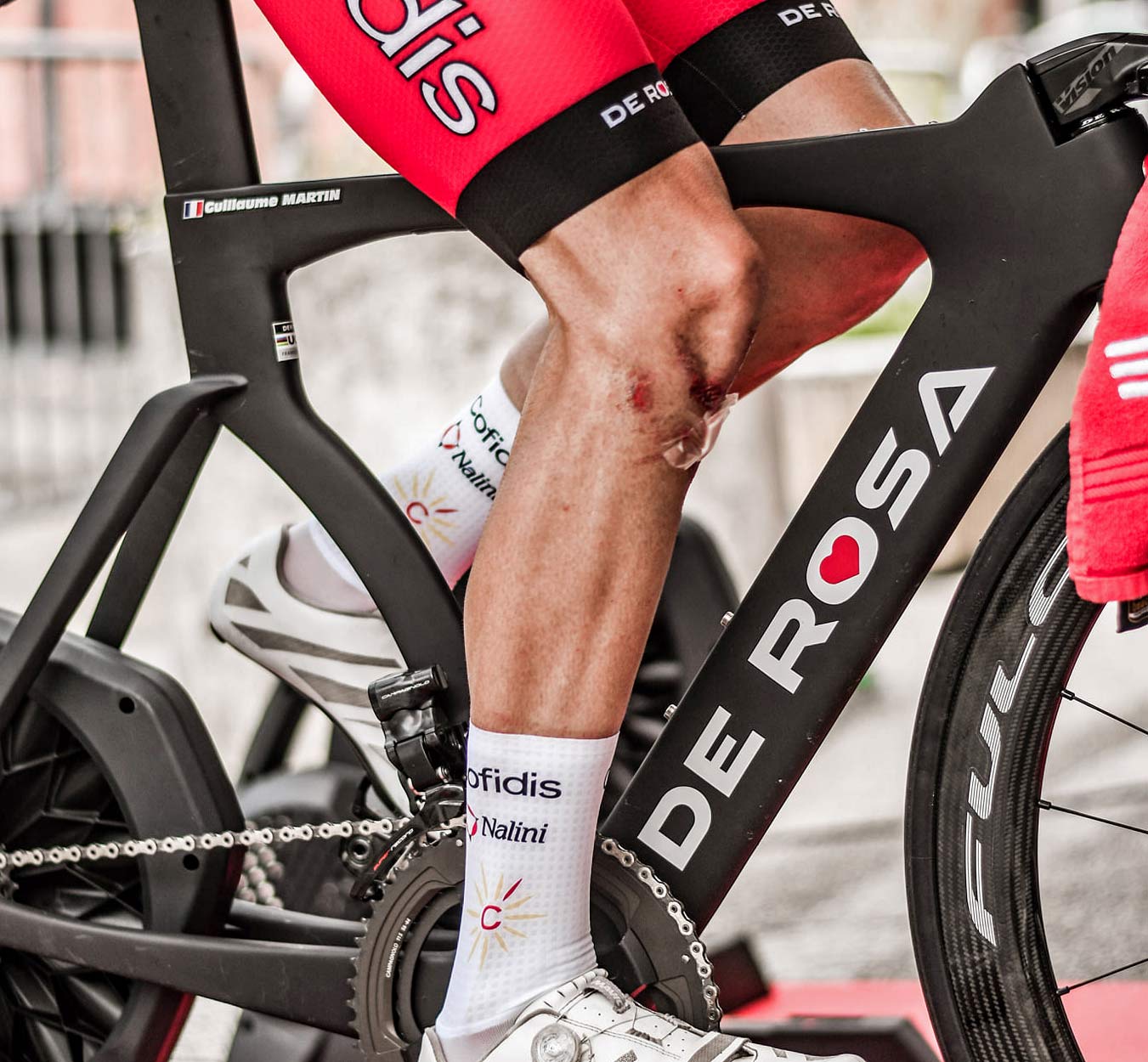 The upper headset cup is recessed down a bit into a short headtube as you see in many modern TT bikes. But the resulting stem position isn’t as low as others, so the TT03 Disk includes a small hump to smooth airflow off the integrated cockpit onto the flat horizontal toptube. 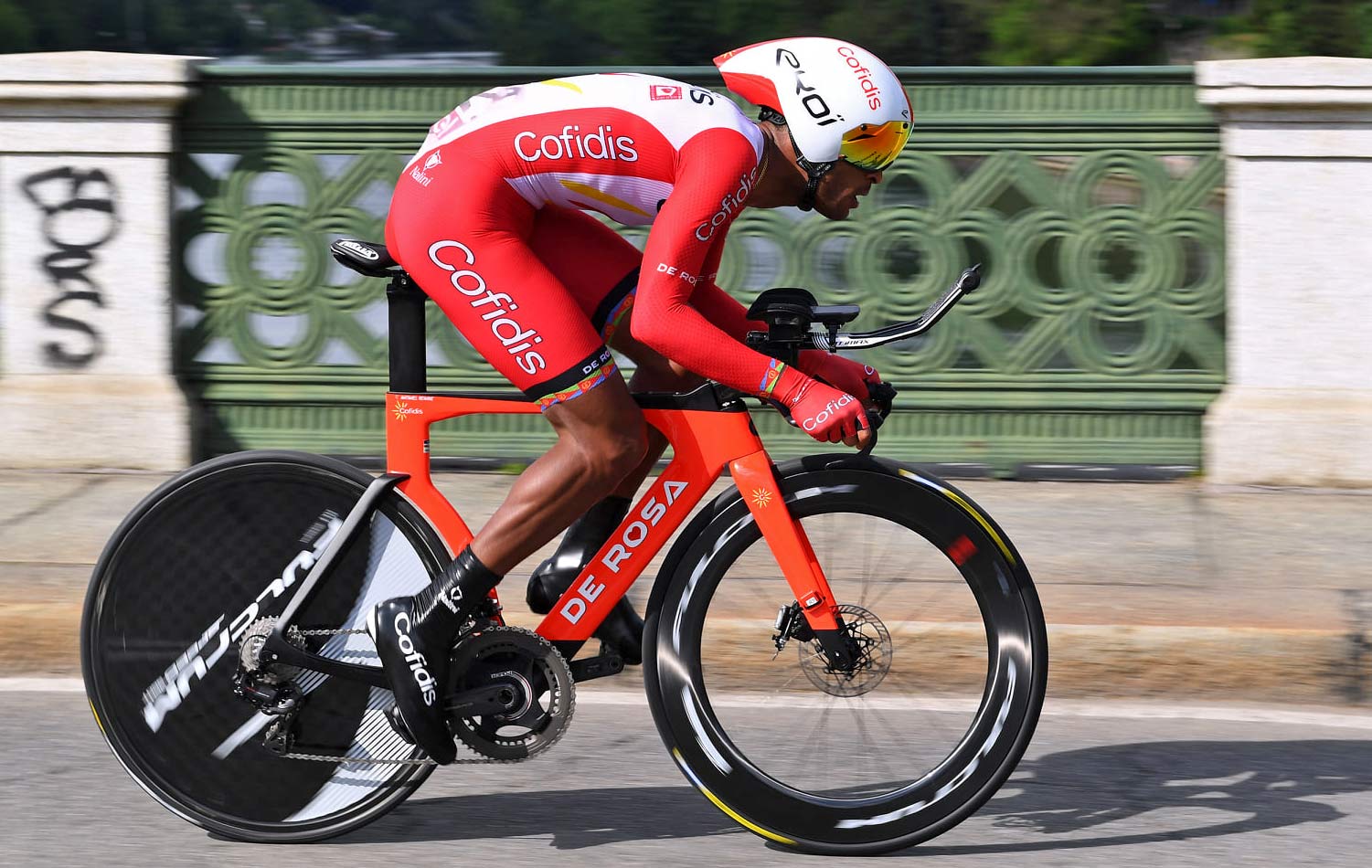 Out back the aero shaping is much the same as before, with the seattube arcing deeply over the rear wheel before shifting vertically as it moves up to the deep aero seatpost. Seatstays again drop down to join the seattube just above the rear wheel cutout, and are set widely like the front end for smooth airflow. 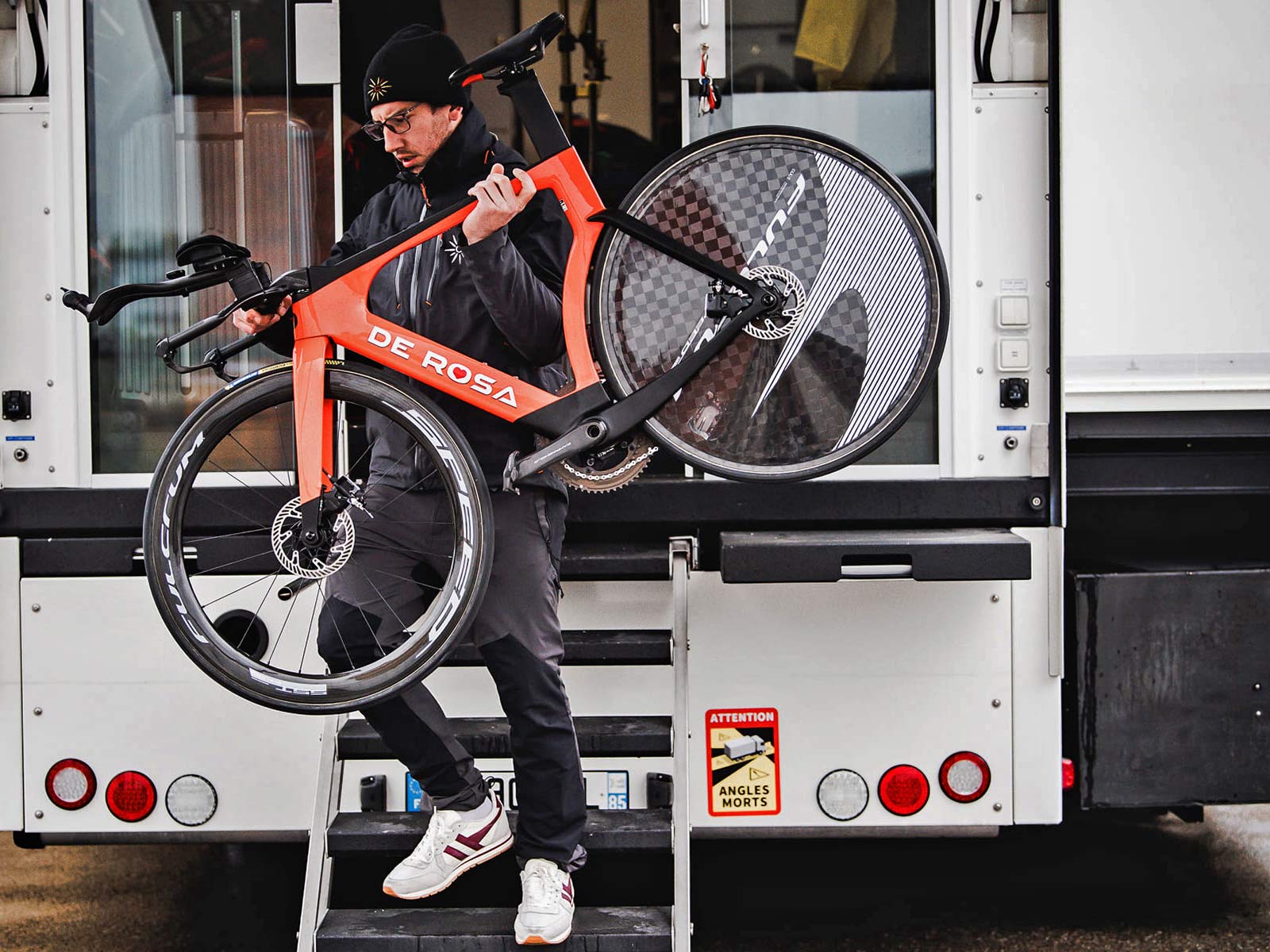 De Rosa shifted to more extensive hi-mod fiber use in the new carbon frame to simply require less material overall, saying it allowed for “natural weight reduction”. But it actually appears that the new frame is a bit heavier at 1230-1250g (vs. 1200g for the rim brake frame) but that is offset by a much lighter new disc brake fork at just 420g (down from 500g for the rim brake fork). 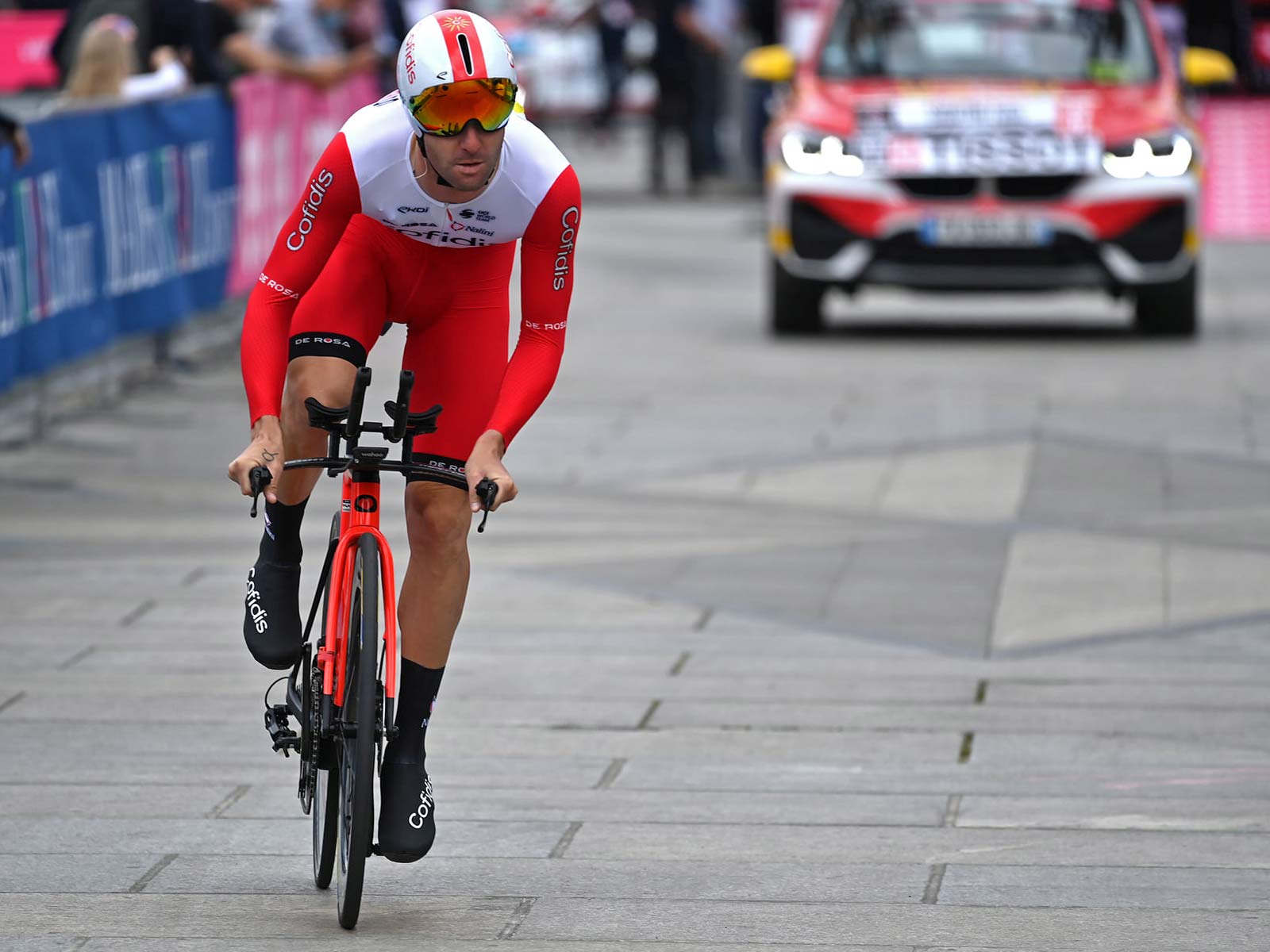 But weight loss is never really a significant priority is designing a time trial bike. Instead, De Rosa says that higher carbon spec translates into a “substantial increase in stiffness”. That provides more important power transfer efficiency, ensuring that no rider watts are lost in their race against the clock. 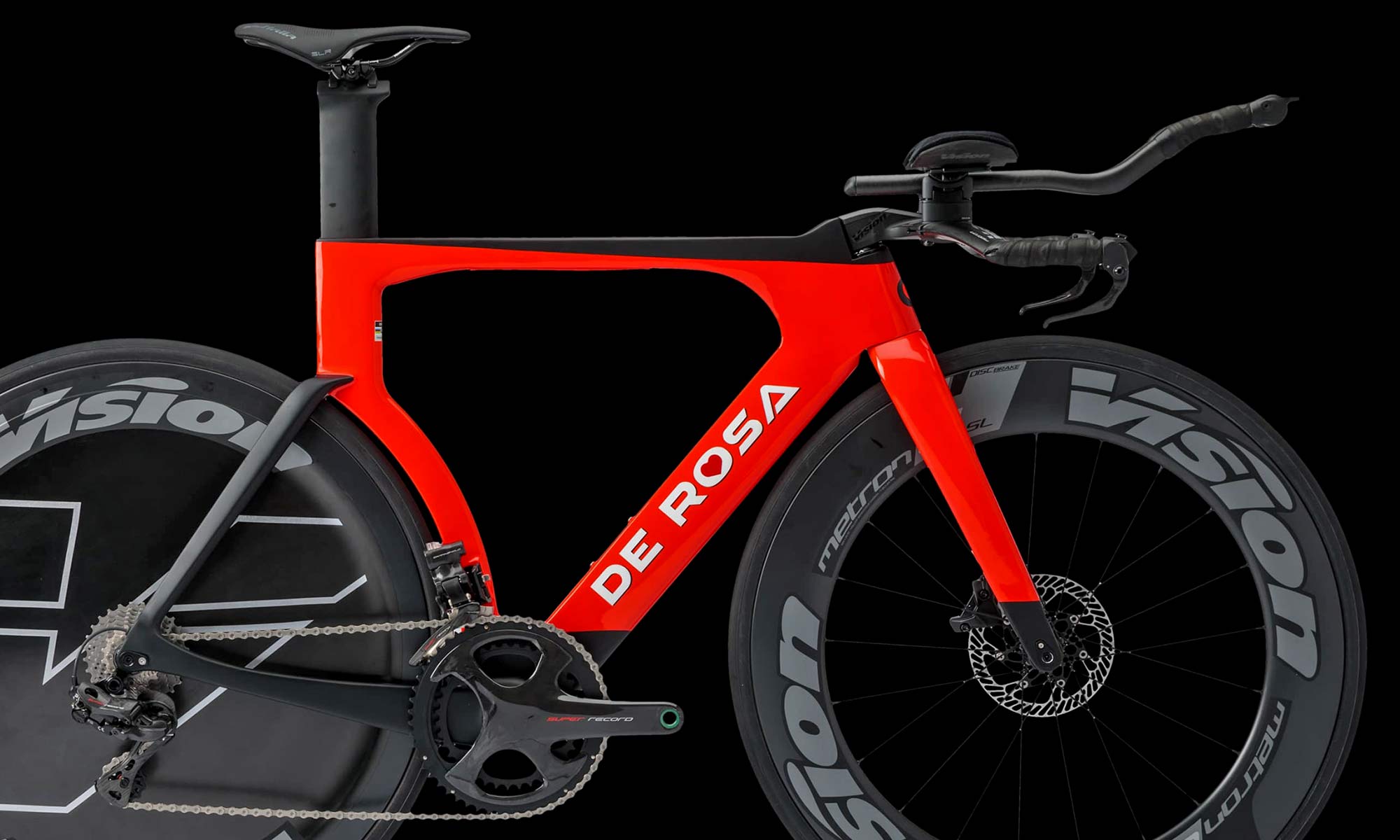 Of course, the new carbon bike gets fully internal routing, which De Rosa developed together with the standard Vision TFA aero cockpit, and is compatible with electronic of mechanical drivetrains – and even mechanical disc brakes like the Cofidis Team raced. 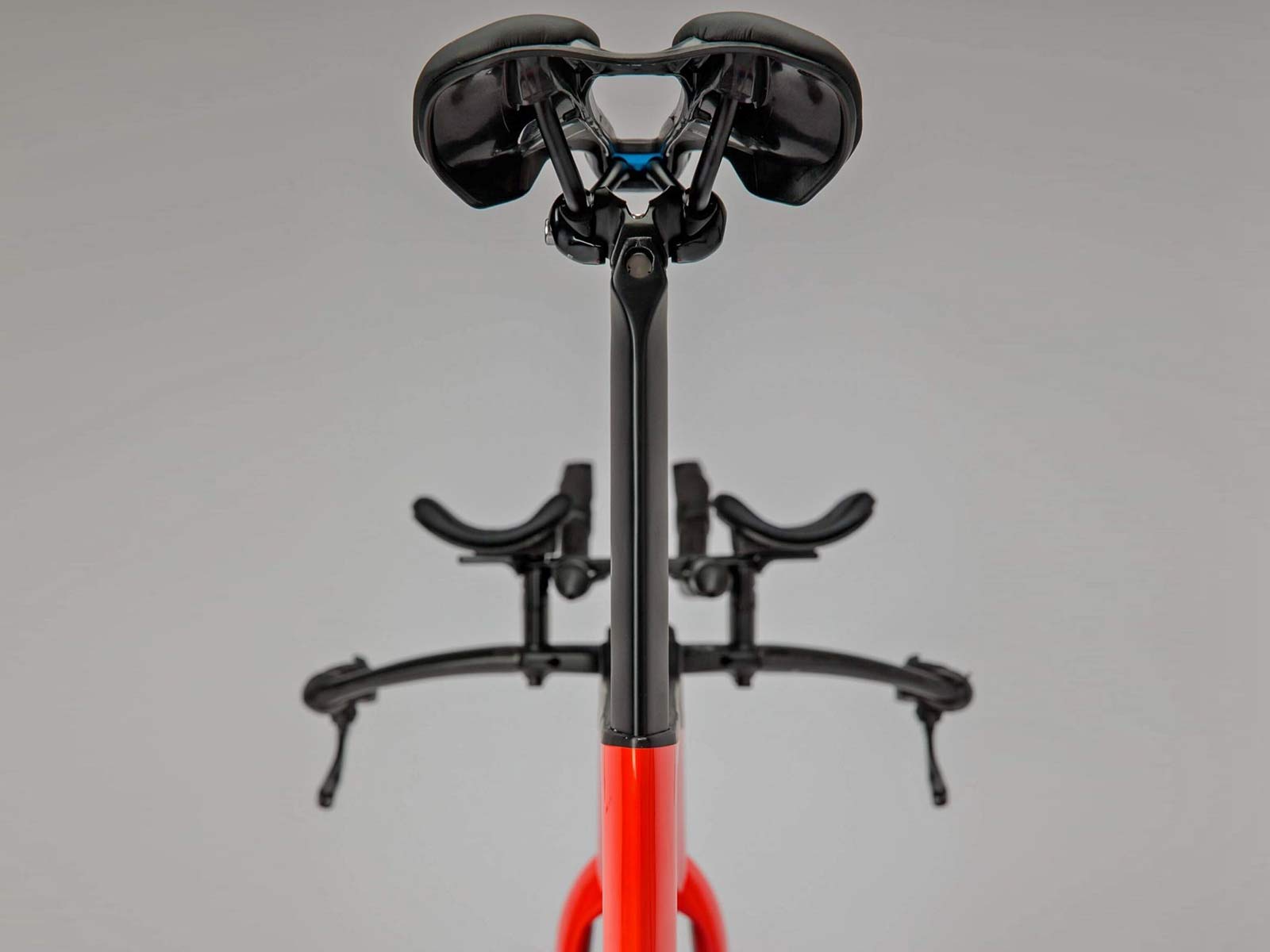 The new bike is offered in just four stock frame sizes, and comes in either the red/black that Cofidis raced or Silver Flash. 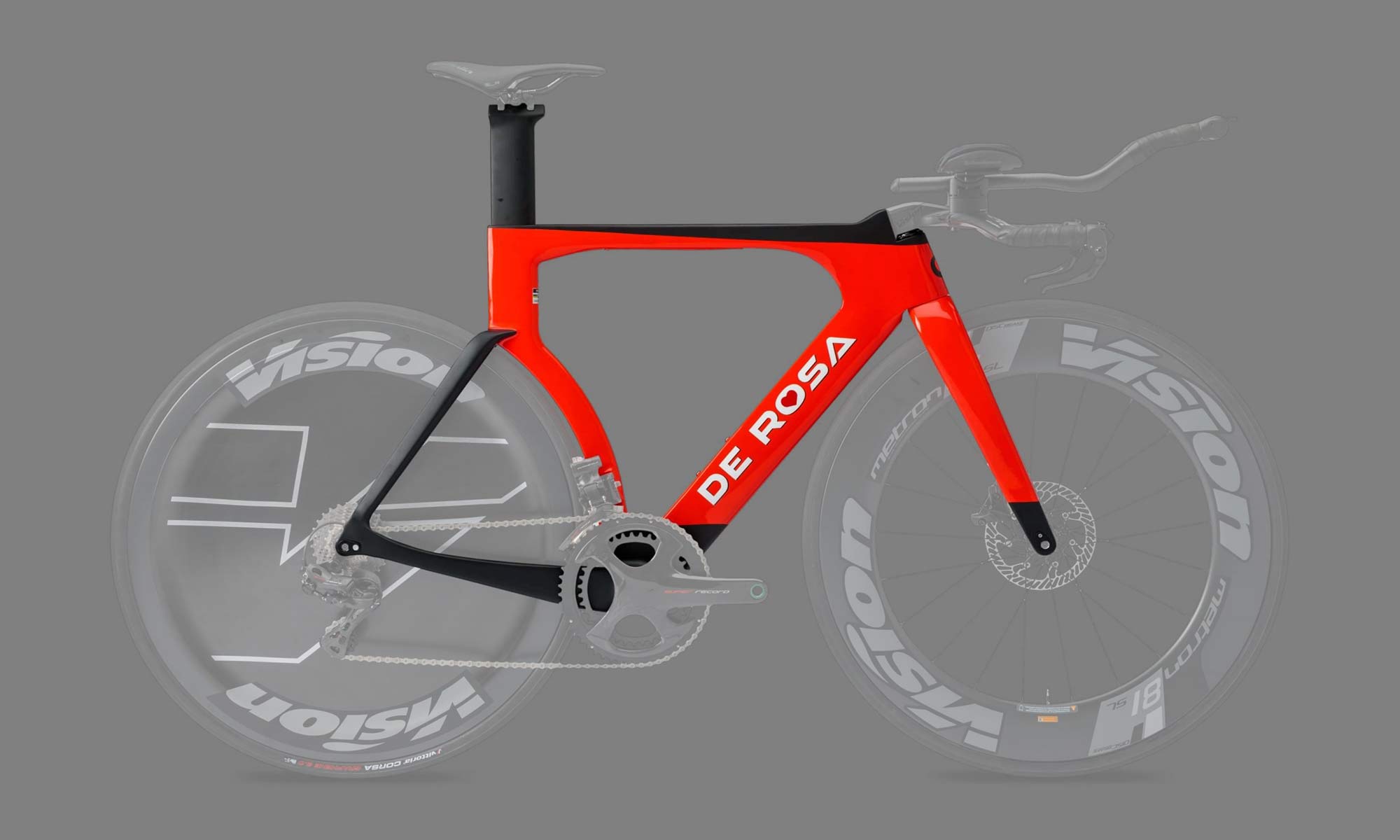 The new De Rosa TT03 Disk doesn’t come cheap. Seeing the $10,000 / 8000€ price tag, I assumed that was a complete bike, but it’s in fact the frame kit including: frame, fork, headset & seatpost. A complete built kit with Campagnolo Super Record EPS and carbon Vision TT wheels like you see here will sell for 14,500€. 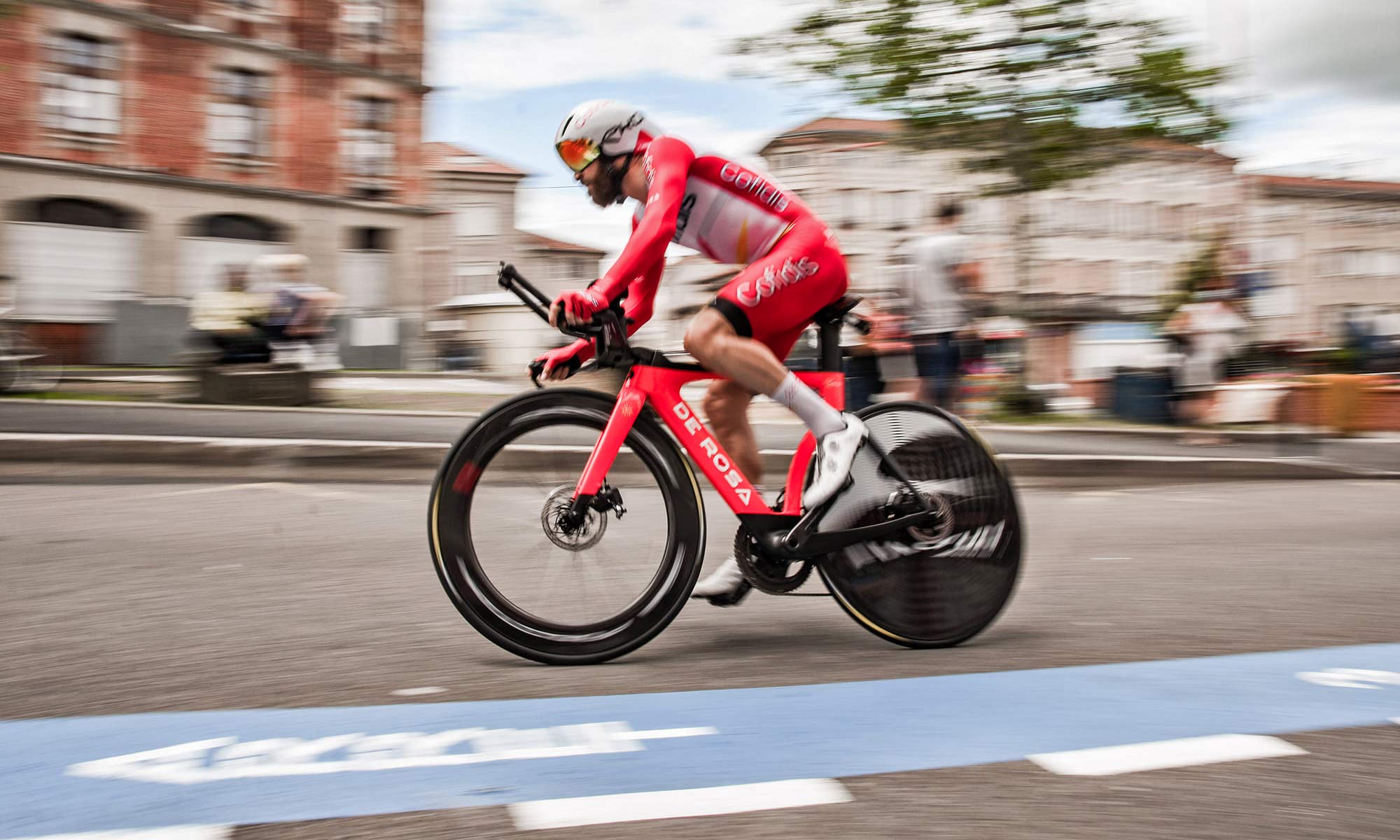 Get your pocketbook in shape, the new time trial bikes are expected to be available to consumers in the last week of December 2021.