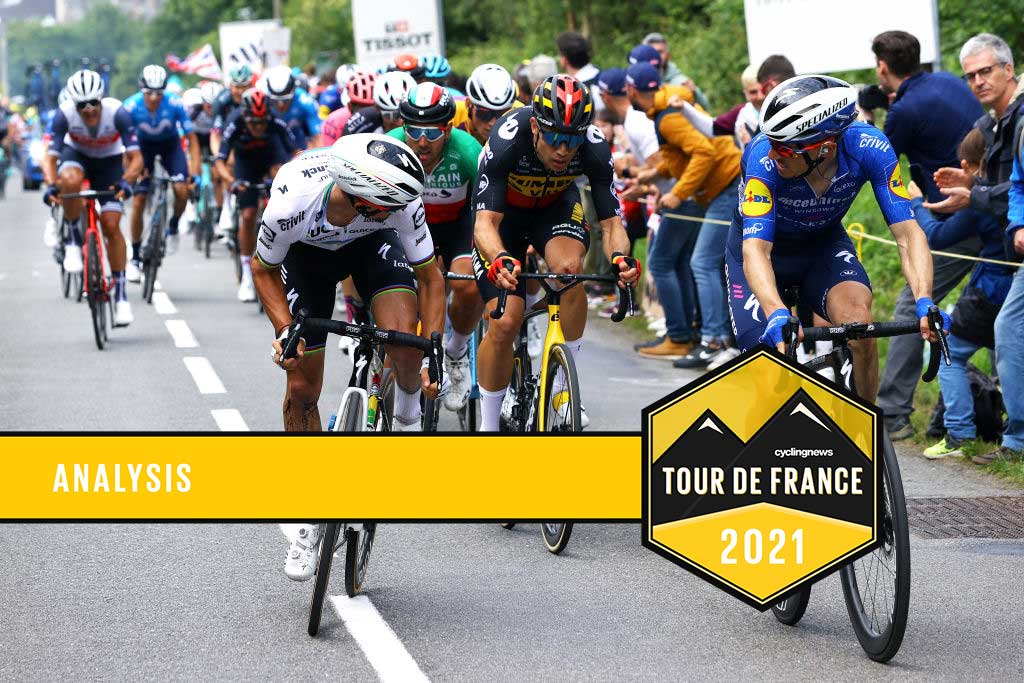 Multiple Tour de France winner Alberto Contador believes that the 2021 race will be even more open than in recent editions but warns that the favourites cannot afford to wait to begin to show their hands. On the contrary, ‘El Pistolero’ believes that climbs like Sunday’s finishing ascent to the Mur de Bretagne all but guarantee a GC battle from the gun and the favourites – like  Primož Roglič (Jumbo-Visma) and Tadej Pogačar (UAE Team Emirates) – will need to be in on it.

In Grand Tours, where multiple favourites can rise to the top of GC there’s often a tendency for the contenders to play a defensive game. But as Contador sees it, that can’t happen in 2021, largely thanks to the demanding early part of the Tour route.

“The good thing about these opening weekend stages in Brittany like the Mur de Bretagne is the GC battle starts from the word go,” Contador told Cyclingnews shortly before the Tour had got underway. “There are riders like [Mathieu] van der Poel (Alpecin-Fenix) or [Julian] Alaphilippe (Deceuninck-QuickStep) or [Wout] van Aert (Jumbo-Visma) who really pull in the fans and who are very effective in these finishes.”

“So they’ll all be up there, all fighting for the yellow from the gun. But you can’t rule out the Rogličs and Pogačars and the overall candidates either, and the combined effect of Saturday and Sunday means that come Monday whoever’s on top of GC” – on current standings, very likely to be Alaphilippe – “will be a leader of the Tour we can’t ignore, a leader who’ll count in the long-term overall as well.”

Contador was himself on the losing end of a face-off with Cadel Evans on the Mur de Bretagne in the 2011 Tour’s stage 4, showing for the first time in that year’s race that, after a miserable first three stages, he was back in business with a vengeance.

In a thrillingly close dash for the line, Contador opened up the GC battle with 1.4 kilometres to go, was then caught but made two more attacks in the last 500 metres, and even half-heartedly raised an arm in victory as he crossed it.

However, it was Cadel Evans, squeezing past Contador at the last minute to win by a tyre width, who just pipped him at the finish. But in one sense it didn’t matter. Given Evans’ final victory and Contador’s role in the second part of the Tour, the Mur de Bretagne had more than fulfilled its role of showing which of the favourites would likely be ahead in the days to come.

As Cyclingnews put it at the time, “For the second time in four days the main GC contenders were compelled to join the main skirmishing long before they have had a sight of the high mountains,” and as Contador now says, “it’ll be the same this time around in 2021,” particularly given the Mur de Bretagne stage is harder than Saturday’s, too.

Looking further into the Tour, the Madrileño warns that Pogačar has stood head and shoulders above his rivals in almost every event in which he’s taken part this season and argues the same could well be the case in July.

“It’s true that Pogačar doesn’t have such a powerful team as Ineos either, but right now he is flying. I don’t think there’s a rider out there that has put him in serious difficulties to date this season. That means any weakness in his team is more than compensated by his individual qualities,” Contador told Cyclingnews.

The retired Spanish Grand Tour champion agrees that Ineos Grenadiers’ ability to play different cards in the Tour should have its plus side, partly because “Pogačar won’t be able to respond to all their attacks.” However, he sees that possible advantage as having its natural limits, because “in the mountains, everybody’s real condition will shine through and we’ve already seen what Pogačar’s capable of on the climbs.”

Nor is Pogačar the only Slovenian on the starting grid this weekend who make an overall impact, he argues, by any means.

“Primož Roglič with Jumbo-Visma, Pogačar and UAE and Ineos Grenadiers are the three teams that will decide a great deal in this year’s Tour de France.”

“Jumbo-Visma was spectacular last year in the Tour, better even than Ineos, but then Ineos have regained a lot of momentum this season compared to 2020. With so many strong teams, anything can happen. We’re going to see a very open Tour. “

Much of Contador’s personal interest will, understandably, centre on how the Spanish fare this year, with Enric Mas (Movistar) – one of his former protegés in the Contador Foundation cycling schools – the country’s main GC challenger.

“Enric is always improving in the Grand Tours as they go on, it’s true that he hasn’t repeated his second place overall in the 2018 Vuelta a España yet, but he started out last year’s Tour not going well and ended up finishing fifth overall;” Contador says.

“Let’s see how he gets on but he should be up there in the fight. I’m sure he’ll at least manage to do as well as he did last year, and maybe better, too.”

Finding a way to beat Pogacar is biggest challenge for years to come, says Jumbo-Visma DS