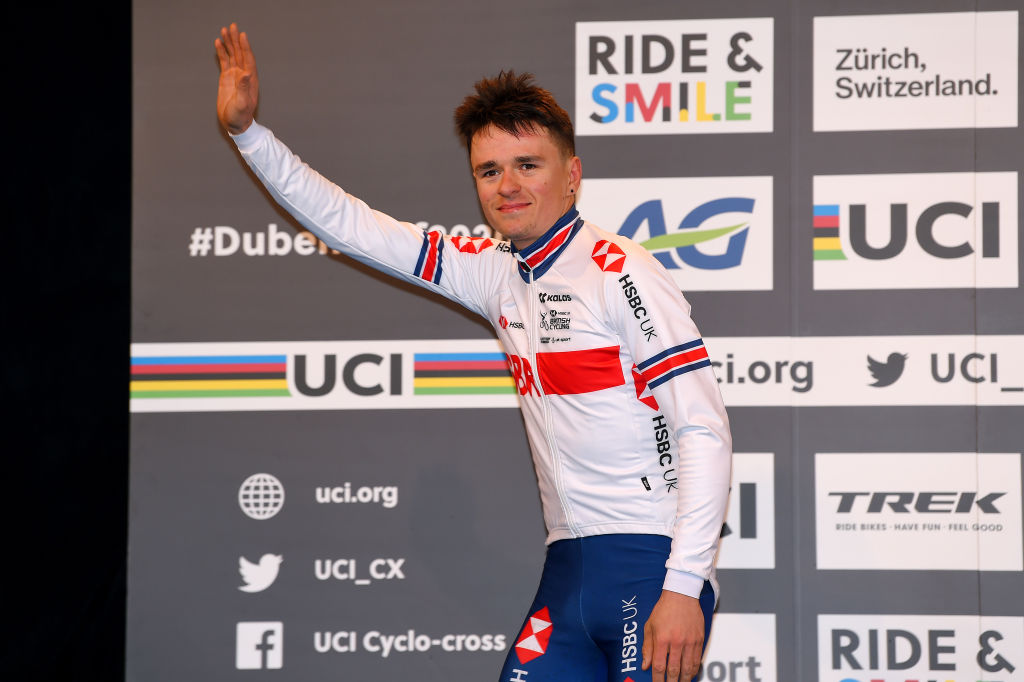 A 12-rider roster was announced today for the Great Britain Cycling Team at the UCI Cyclo-cross World Championships in Ostend, Belgium, January 30 and 31, with only two elite riders representing the federation this year.

Tom Pidcock (Trinity Racing) returns to the elite ranks for a second year, impressing last year with a silver medal in that division at the age of 20. Evie Richards (Trek Factory Racing CX), a two-time under-23 women’s world champion, will compete in the elite women’s race. In the U23 categories, the delegation will include seven men and three women.

“Tom Pidcock has backed up his performances from the road and mountain bike seasons excellently with two podium finishes so far in the World Cup series as well as taking the victory in the Telenet Superprestige in Gavere just before Christmas,” said Stephen Park, performance director for British Cycling, in a press release.

“He has without doubt established himself as ‘one to watch’ in the elite men’s race and I’m excited to see how he does this year, having finished second last year in his debut race in this world championship category.”

Pidcock, currently ninth in UCI elite rankings, started his cyclo-cross campaign with a 17th position in the first World Cup in Tabor, and since had a string of seven podiums in 10 races. The day following the Worlds, Pidcock will adorn the black and red colours of Ineos Grenadiers and tackle a mountain bike race and then begin his road season. His first road races should be Volta ao Algarve and Opening Weekend on the cobbles in Belgium.

Richards has ridden an abbreviated schedule in cyclo-cross after taking two wins in short track cross-country mountain bike World Cups last fall. The 23-year-old has only three cyclo-cross races on the season so far, her best finish sixth at the World Cup in Namur in late December.

“I’m looking forward to watching Evie race in Ostend, partly as part of her preparations for Tokyo selection for the mountain bike race, but also because of her passion for cyclo-cross and her potential to do well on this course,” Park said.

Leading the U23 contingency for the women is Anna Kay (Starcasino CX Team), currently ranked 12th for elite women with 12 top 10s in a busy season with 21 elite races. The 21-year-old was the 2020 bronze medalist, and will race beside Hattie Harnden and Josie Nelson.

European silver medalist Thomas Mein and bronze medalist Cameron Mason have been selected for the U23 men’s race, lining up alongside brothers Dan and Toby Barnes, Rory McGuire, Oli Stockwell and Ben Turner for the Great Britain Cycling Team.

“At the European championships, we saw Thomas Mein and Cameron Mason both on the podium in the under-23 men’s race, finishing in second and third place respectively, and they too have been impressive during the World Cup series, both securing top ten finishes in the elite men’s class, so I’ll be interested to see how the experience of riding up a category will play out in their under-23 men’s race,” added Park.

Earlier this month the junior and U23 races were cancelled at the lead-up World Cup event in Overijse. This was followed by the UCI announcement that the Junior divisions at Worlds would not take place.

“The competent authorities of Belgium have confirmed that both the Elite and Under 23 races for men and women at the 2021 UCI Cyclo-cross World Championships can go ahead as scheduled on 30 and 31 January in Ostend (Flanders, Belgium). However, due to the current pandemic (Covid-19) linked to the novel coronavirus (SARS-CoV-2), the Men Junior and Women Junior races will be cancelled,” declared the UCI on January 15.

“We received the news on Friday that the juniors are unable to compete, and while I know they are disappointed, we completely understand and respect the decision given the circumstances,” Park said.

“As an elite sports team, we acknowledge we are in an extremely privileged position to be able to continue with our operations, and it’s not something we are taking lightly. The team traveling to Belgium are committed to doing the nation proud, not just in their performances but in their conduct while representing the Great Britain Cycling Team. I can’t wait for the first world championship event of 2021 to be underway, and kick-off what should be a brilliant year for cycling in Britain.”

Mavic warns against the dangers of counterfeit wheels