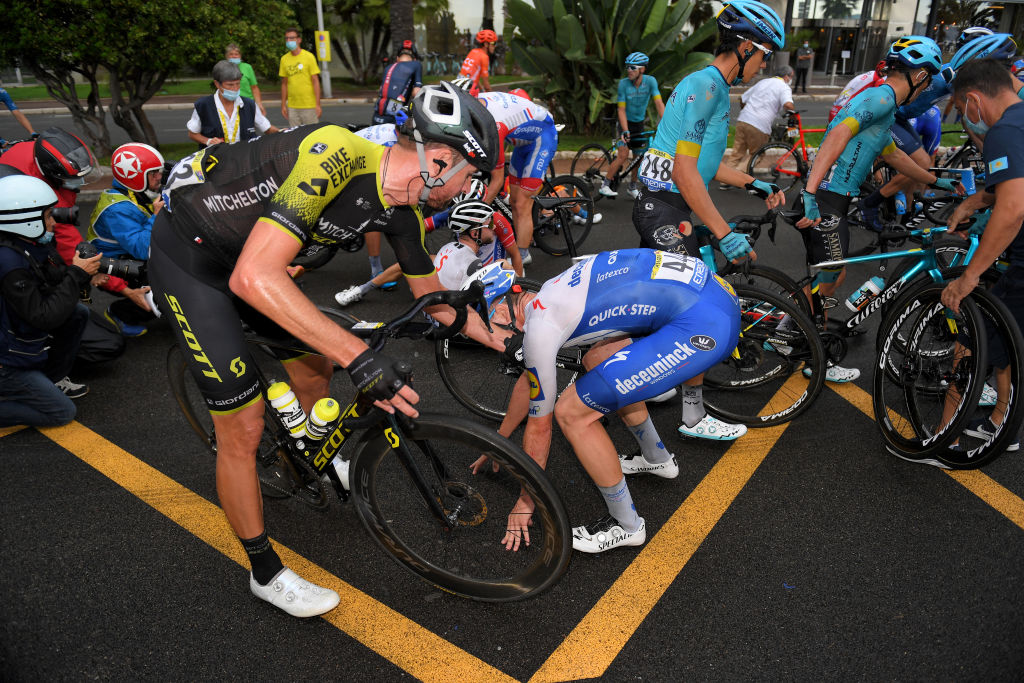 Sam Bewley (Team BikeExchange) has postponed his 2021 season due to longstanding injuries related to his Tour de France crash from last autumn. The New Zealander fractured his left wrist on stage 10 of the Tour and retired from the race. Lingering pain from the accident lasted until December, with the 33-year-old forced to go under the knife. Speaking at the Team BikeExchange training camp in Spain, and still sporting a cast on his left arm, Bewley told Cyclingnews that the surgery and recovery would mean that his 2021 racing debut would move to March. He remains hopeful of making the team for the Giro d’Italia.

“I had surgery on it at the start of December and I’m still waiting for it to come right. It was a basic and simple fracture and we didn’t operate on it then because it wasn’t required but in the end it just didn’t set right so they had to reconstruct it,” Bewley told Cyclingnews.

“At the end of the season I still had pain and it just wasn’t getting any better so I had some scans. We had to take a bone graft from the hip and put it into the wrist, re-break it, re-set it and now I’m just waiting for the bone graft to become part of the wrist and then I’ll be back on the road,” said Bewley.

“I’ve been off the bike for a while. The surgery was seven weeks ago and up until that point I wasn’t doing a lot of riding because of the pain. I was doing a bit but by the time I’m back on the road it will have been about three months or so. I have been doing a lot of work on the trainer and other work like hiking and running and whatever else I can do to keep the hours up during the week.”

Bewley’s first race back is likely to be in late March with the Italian stage race Settimana Internazionale Coppi e Bartali penciled in for March 27. From there his schedule is unclear but he hopes to make the eight-rider roster for the Giro d’Italia, which takes place in May.

“I should be back on the road at some point in February and then that will give me six weeks to come back for Coppi Bartali at the end of March. I’ll go and do an altitude camp somewhere like Andorra or the Sierra Nevada. That’s 100 per cent realistic.”

“It’s early to say but I’d like to be ready for the Giro if I could be. That’s my target, to make the selection and only time will tell. I’m going to have to knuckle down, work at altitude and then get as much racing in as possible between March and May.”

The off-season has been challenging for the European based pro, who has divided up his time between indoor training and other outdoor activities that don’t put too much pressure on his left wrist. He admits that he’s tried to make the most of the opportunity to throw himself into new hobbies in order to maintain fitness and purpose during the winter.

“It’s been an interesting off-season, trying to do different things to keep fit. I’m still doing quite a few hours each week but there are only so many hours that you can do on the home trainer before going crazy. In a weird way I’ve enjoyed doing different things and I think it’s healthy to do that. It’ll be interesting to see where I can get my fitness levels to when I’m back on the road and then when I start racing in March. From there we’ll have a better idea of where I’m tracking and what the long-term plan is.”

If Bewley needs any additional off-season activities to throw into the mix he could always venture back towards the popular cooking videos that he posted on social media during the lockdown last spring. The posts offered an element of humour at a time when most pros were forced to remain indoors during the pandemic, and Bewley took to the format to create a series of videos for his followers.

“I’ve actually not done any for a while. It’s quite difficult when you’ve got one arm in a cast but I enjoyed them,” he said.

“I look back at some of them now and cringe a little bit but at the end of the day I was by myself throughout the lockdown and I think the idea just came from having a couple of beers. I was actually doing it for some of my mates and then someone suggested that I start putting them online. I got a bit addicted to social media at that point because people were enjoying it and were having a laugh. It was fun to do and to make other people laugh. It did give me something to do and I’d be thinking about how to make the next one funny, what I could wear, what can I cook and how can I basically be a dickhead. I enjoyed that.”

6 riders to watch at Paris-Nice